Investment in Spain: quantity, but quality?

Investment was one of the hardest hit by the economic crisis in Spain. Between 2007 and 2013, gross fixed capital formation (GFCF) fell by close to 40% in real terms, a clearly much larger drop than the one in GDP, namely 8%, and the relative weight of investment with regard to GDP went from 31% to 18%. Now that investment is starting to show signs of recovering, it is a good time to weigh up the situation.

In spite of this slump in investment, its current relative weight with regard to GDP is not any lower than in the main developed countries. However, what does seem to be an anomaly is its relative importance during the years prior to the crisis, as a result of the housing boom, with investment in construction accounting for 80% of GFCF. And it is precisely investment in construction that adjusted the most between 2007 and 2013: in 2014 Q1 it accounted for just 50% of all GFCF. Investment in capital goods and intangible assets, the other two large components, still have a similar relative weight with regard to GDP as the main developed countries. For example, in Spain this rose to 7.9% of GDP in 2014 Q1 while in Germany and the euro area as a whole its relative weight was 7.4% and the 7.6%, respectively.

Consequently, the volume of investment does not seem to be Spain's main problem, at least when compared with the main developed countries. The quality of investment, however, is just as important. Although it is difficult to measure quality directly, the competiveness indicators published by the World Economic Forum are useful as they help to identify where there is room for improvement. As can be seen in the table, Spain's ranking produced by the main indicators determining an economy's capacity to direct its resources towards the most efficient uses is not very good when compared with the main advanced countries.

Another determining factor of investment quality and quantity is the distribution of company size. Big companies normally invest a larger proportion of their resources than smaller companies and this difference is particularly noticeable with regard to R&D investment. According to data from the SEPA foundation for Spain's industrial sector, companies with more than 200 workers invested 1.3% of their revenue between 2008 and 2011, double what firms with fewer than 200 workers invested. Similarly, the quality of the investment carried out also seems to be better in general. According to the same source, large firms normally monitor innovation projects more thoroughly and their success rate is usually higher.

The evidence therefore seems to suggest that Spain could improve the quality of its investment. Competitiveness indicators offer key aspects in which the Spanish economy could improve. It also seems that larger company size would be a great help. 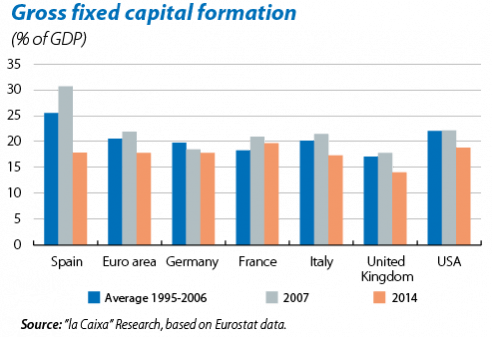 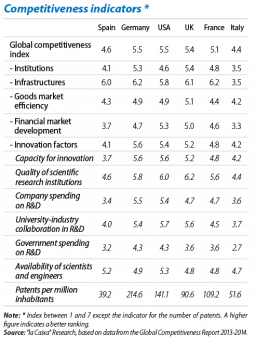 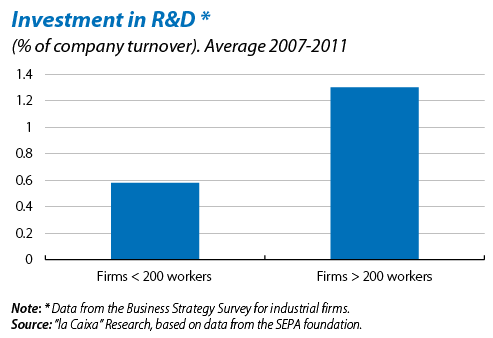