From the barrel to the pump: how are diesel prices determined?

Oil prices have been the focus of attention of all analysts since they started to plummet in July 2014. Since then, the price in euros of a barrel of Brent crude oil has fallen by more than 40% while, over the same period, the price of diesel, which represents 80% of the retail fuel market, has fallen by 20% according to data from the AOP (Spanish Association of Petrol Product Operators). Below we analyse why the drop in the price of this fuel has been less than the drop in the price of crude oil.

The price of a litre of diesel is made up of three elements: the wholesale cost of the diesel, the gross margin plus distribution costs and taxes. The first price component, the wholesale cost of diesel (i.e. the price of crude oil plus refining costs), has recorded a 38% drop since July 2014, a figure very similar to that of oil. It therefore comes as
no surprise that its relative weight in the price paid by consumers has gone from 43% in July 2014 to 33% in January 2015.

Other important elements in the sale price of a litre of diesel are the wholesaler's gross margin and distribution costs. The latter include the cost of petrol station personnel and maintenance, petrol transport costs and a contribution to the National Energy Efficiency Fund.1 This component represented 15% of the final price of diesel in January 2015 (compared with 12% in July 2014) and is fixed, at least in the short term. Adding together the two parts described above, we get the price of diesel before tax, which has fallen by 30% since July.

Lastly, in Spain, taxes constitute the most substantial part of the price of diesel at the pump. Specifically three taxes are applied to diesel consumption: special state and autonomous community taxes, of a fixed sum, which total 0.331 and 0.037 euros per litre respectively, while 21% VAT is also applied to the final price, which includes the special taxes. The sum of all taxes in January 2015 came to 0.554 euros per litre, 52% of the final price and a much larger relative weight than the figure posted in July 2014, namely 45%.

Within the context of the euro area, due to the similarities between countries and a common environmental policy, the same analysis reveals that the sale price of diesel has experienced a similar trend to the one in the Spanish market: falling between 15% and 22%, depending on the country, between July 2014 and January 2015. However, if we cross the Atlantic and analyse the US market, we find a completely different situation, with petrol as the main fuel and much lower taxes. As can be seen in the second graph, taxes barely account for 16% of the final price of petrol while the wholesale cost of the fuel represents almost 60% of the end price. The cost of this component has halved since July due to falling crude oil prices and a considerable reduction in refining costs, to such an extent that the price of petrol at US pumps has fallen by 30%, a percentage logically higher than the reduction seen in Spain and in the euro area as a whole. 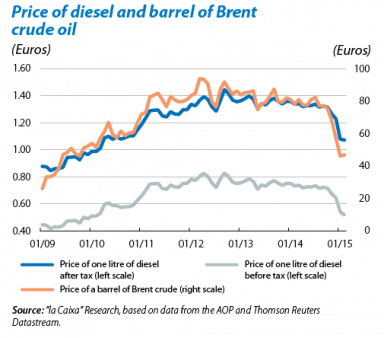 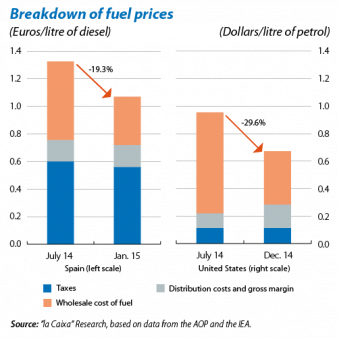