After two years of negative price changes resulting in a lively debate regarding the risks of deflation, we are about to embark on a period of rising inflation. This change in direction, which began already in October, will gain in intensity over the coming months, the year ending with inflation clearly positive and climbing to 1.3% in 2016. This recovery in inflation is mainly due to three factors, which we will now discuss.

Firstly, between November and January the base effect will have disappeared from the sharp fall in oil prices occurring during these months one year ago, so that general inflation will rise quite sharply (we believe it will reach 0.6% in December 2015). It should be noted that this increase will still occur even if oil prices remain at their current level or fall slightly (see the first graph). In fact, we expect oil prices to increase throughout 2016, also playing their part to push up inflation.

A second element that will boost prices in 2016 will be the euro's depreciation against the dollar as a consequence of the divergence between monetary policies on both sides of the Atlantic: while the ECB is expected to take its expansionary policies even further, the Fed will embark on monetary normalisation. The euro's depreciation will mean that Spain will import inflation from countries outside the euro area. A depreciated euro therefore affects the general consumer price index (CPI) by making imports more expensive, pushing up the cost of all intermediate goods bought abroad such as, for example, oil and other commodities. Moreover, the relationship between the exchange rate and some imported industrial products, especially those used for consumer durables which have a significant relative weight of 11% of the whole CPI, is strong and negative. In other words, when the euro depreciates, the import price of these goods rises (see the second graph). Depending on the capacity of companies to vary their operating margin, this impact will be passed on more or less to the consumer price. Based on a study by the ECB,1 we can expect the euro's depreciation against the rest of the currencies of Spain's main trading partners, totalling about 3% in 2015, will have an effect in the short and medium term. Specifically, this depreciation of the nominal effective exchange rate, caused mainly by the dollar gaining strongly in value, could push up inflation by almost 0.2 pps in the next two years. Moreover, given that the euro is expected to go on depreciating quite considerably against the dollar in 2016, this channel will continue to boost inflation.

Finally there is also the improvement in the labour market, with an expected increase in the number of employees of close to 400,000 in 2016 (after 900,000 between 2014 and 2015), which will have a favourable effect on household income and confidence, in turn stimulating consumption and consequently prices. We therefore predict that core inflation will continue to recover and reach 1.3% in 2016 compared with 0.6% in 2015.

In summary, we expect inflation to come back in 2016 and gradually approach the ECB's target. The next phase will therefore be one of rising inflation. 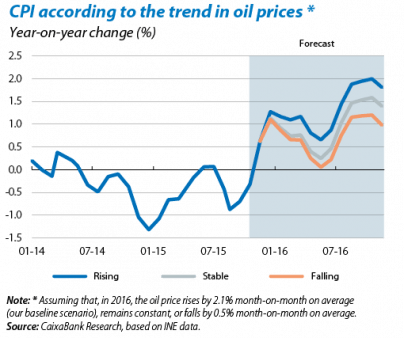 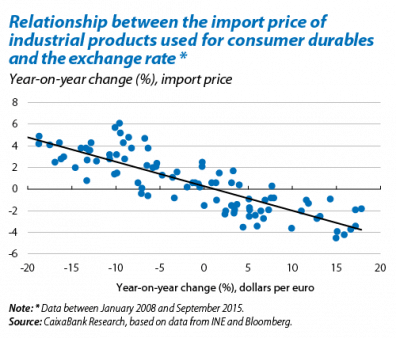