Private pensions: a complement to the public pension system

Demographic trends are posing a significant challenge for public pension systems. In particular, the reduction in the number of workers compared with the number of pensioners is pushing down the purchasing power of pensions in pay-as-you-go (PAYG) systems (and pushing the retirement age up). For example, the OECD's latest annual report on pensions estimated that, according to the current rules in force, the future pension of someone earning an average wage who started working in 2008 at twenty years of age would not exceed 60% of their wages just before retiring in twenty-two of the thirty-four member states. Given this situation, private pensions are required to play an increasingly relevant role and many countries have started to introduce a range of measures to encourage their inhabitants to take them out.

The degree of participation in private pension plans varies considerably between countries. In general, this tends to be less the higher the level of benefits from the public pension system.(1) But precisely those countries with the largest benefits are the ones that need to make the greatest adjustments, or are already doing so, to their public pension systems and consequently they are likely to experience a substantial rise in private plan participation in the near future. This would be the case of Spain where, according to OECD figures, an average worker's pension is relatively high compared with their wage before retirement while the rate of participation in private plans is among the lowest.

The rate at which private pension plans are taken out, in those countries where this is voluntary, clearly tends to increase with the worker's age. In fact, people usually start to contribute to private plans too late to be able to maintain their purchasing power after they retire. In this respect, there is ample research in the field of behavioural economics(2) that shows people do not have enough savings discipline. Procrastination (delaying the decision), short-sightedness (not taking the future sufficiently into account) and inertia (refusing to modify a pattern of behaviour) have a considerable effect on the level of savings.

A late start to saving entails significant cost in terms of losing the multiplying effect provided by compound interest. For example, contributions of 3,000 euros per year (increasing by 2% per year in line with inflation) over forty years and with an average annual return of 5% would provide us with a retirement capital of 507,355 euros. If the decision to make contributions was taken later but contributing a larger amount, the final result would be clearly lower: contributions equivalent to 6,000 euros per year as of today (also with an annual increase of 2%), starting within twenty years and lasting twenty years would become 364,270 euros.

The vast majority of countries have traditionally used different fiscal incentives to encourage people to take out pension plans. These initiatives generally allow, up to a limit, a discount on taxable bases according to the contributions made and defer the taxes on this portion of income until retirement. This kind of incentive particularly benefits higher income taxpayers who are facing higher marginal rates on their income. Other countries, a minority, have chosen to offer fixed-sum incentives, such as discounting a percentage of the contributions made to the pension plan from any tax to be paid. In any case, tax incentives have not been powerful enough to result in a significant rise in the degree of private plan coverage. In other words, it would be very expensive for the public treasury to promote universal cover through fiscal incentives.

Given this situation, some countries have opted to make it compulsory to take out a private pension plan. In cases such as that of Australia, the system specifies a mandatory minimum level of contributions, an option that is not without problems since the level of savings required may be too high for some families, especially young ones who might prefer to use their income to invest in their children's education or in purchasing a home. Recently, and as an alternative to the compulsory option, the automatic enrolment of workers in private pension plans has become more important. Under this scheme, companies must enrol all employees and allocate a percentage of their wages to their pension plan. Workers have a period of time to state whether they wish to continue making contributions or cancel their participation. Among other countries, this initiative exists in the USA, United Kingdom, Italy and New Zealand and, since it was implemented, significant increases have been observed in the percentage of people of working age with private pension plans. Another advantage of automatic enrolment is that, as a reform, it is politically easier to impose than making contributions compulsory.

The case of New Zealand (with its «KiwiSaver» scheme) shows the importance of the system's design and in particular the choice of the default contribution rate in automatic enrolment models. When a new worker joins, New Zealand companies must enrol them in a private pension plan, allocating at least 2% of their wages to this plan. Employees have two months to withdraw and can freely fix the percentage of their salary they wish to allocate to the plan. When this model was implemented in July 2007, the default contribution rate was set at 4% and was subsequently lowered to 2% in April 2009 to minimise the percentage of people withdrawing from the system. In June 2011, most workers had kept the fixed default rate: 62% of employees starting with a 4% rate kept this rate, while the percentage rose to 80% among those who had started with a rate of 2%. This example illustrates, once again, the importance of inertia in human behaviour.

In short, having a private pension plan is becoming advisable in any attempt to maintain purchasing power after retirement. The public authorities, aware of this and of the biases affecting human behaviour when saving for the future, are using different alternatives to promote their use among the population. This is a necessary effort to reduce inequality at retirement age between those who are more cautious and prepare in advance and those who like to live for the day until it is too late.

(1) Relationship between the retirement pension received and average wage before retirement. 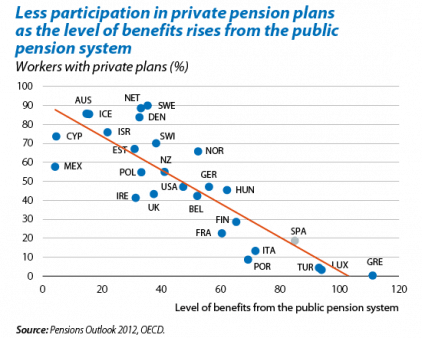