On 22 January 2015, Mario Draghi announced a considerable enlargement of the ECB's public and private bond purchase programme (QE) with the goal of anchoring inflation expectations in the medium term and reviving the economy, something that was unimaginable a year ago. With this announcement, the ECB joined the rest of the central banks such as the Federal Reserve, the Bank of Japan and the Bank of England that have been increasing their balance sheets by buying up assets for some time now. A large amount of liquidity has been injected into each country's economy through these expansionary monetary policies. However, inflation has continued to fall steadily and is now starting to jeopardise the anchoring of inflation expectations in the medium and long term. Given this unusual situation, some have even questioned one of the few laws in economics that had seemed resilient, known internationally thanks to a famous phrase by the economist Milton Friedman:

Inflation is always and everywhere a monetary phenomenon in the sense that it is and can be produced
only by a more rapid increase in the quantity of money than in output.

This claim that inflation is a monetary phenomenon is based on the quantity theory of money, according to which prices vary in proportion to the money supply. This relationship is based on a mathematical identity,1 according to which the value of transactions carried out in an economy (understood as nominal GDP) is equivalent to the amount of money circulating in that economy (understood as the amount of money in an economy multiplied by the number of times this changes hands; i.e. the velocity of money). If we assume that the velocity of money is constant, in an economy without economic growth the inflation rate equals the rate of growth in money. Therefore, if money supply increases, there will be more money chasing the same goods, so prices will go up. Similarly, if the rate of growth for economic activity and the quantity of money is the same, prices should remain constant.

Friedman's statement has been backed by empirical evidence, also showing a positive relationship between inflation and growth in excess money supply (growth in money supply above the real growth in GDP) for a large number of countries. This relationship is strong and robust in the long term but, the relationship between both variables may weaken temporarily in the short term due to factors such as price rigidity and the velocity of money not being constant. For example, a reduction in the velocity of money in circulation would be compatible with an increase in the money supply without putting pressure on prices.

Based on the above, both the theory and empirical evidence suggest that, if growth in the money supply is greater than the actual growth in GDP, this should push up inflation in the medium term. However, since the start of 2012, the relationship between both variables seems to have weakened to the point of almost disappearing. On the one hand, growth in money supply has accelerated more than GDP growth while, on the other, core inflation2 has continued to fall. Below we look at the main factors that lie behind this decoupling between monetary aggregates and prices in the last few years.

In this respect, an analysis of the effectiveness of monetary policy and specifically how it affects monetary aggregates is essential. In general terms, when a central bank offers liquidity to the banking system, either by offering long-term credit or by directly purchasing some of its assets, the monetary base increases.3 There is no automatic rise in the money supply,4 however. Traditionally banks would use the liquidity provided by central banks to increase the supply of credit5 and movements in money supply were therefore in line with those in the monetary base, ultimately leading to an increase in consumption and investment and thereby pushing up prices.

However, the considerable increase in the monetary base occurring over the last few years has not led to a similar increase in the money supply (see the table). The factors limiting the growth capacity for credit can be found both in its demand and supply. Specifically, a significant part of demand was immersed in an extensive deleveraging process. Moreover, the healthier part of the private sector did not demand credit either, afflicted by a highly uncertain environment that encouraged them to save and postpone decisions to consume and invest. On the supply side, the adjustments banks have had to carry out in order to comply with the new banking regulations (Basel III), both in terms of solvency with higher capital ratios and also in terms of liquidity, have encouraged them to be very cautious when granting loans and to hold onto a considerable buffer of liquidity.

Given this scenario, many banks have opted to use the liquidity they have received to increase their reserves with the central bank and thereby maintain some room to manoeuvre to handle any upswings in financial tension or further regulatory requirements. With the remaining liquidity, investors looked for a more attractive return-risk combination, either in other financial assets or in other economies that were growing. A lot of the liquidity provided by central banks has therefore ended up in the main emerging economies.

One last factor that should be taken into account is the growing importance of alternative sources of financing to deposits in the pre-crisis period.6 Traditionally, when financial brokerage was mainly through banks, their liabilities, in other words traditional monetary aggregates, were a good indicator of the quantity of money in the economy. However, this relationship has weakened with the expansion of the wholesale funding market. For example, in the US, when commercial banks used to sell asset-backed securities, they could lend again with the liquidity obtained. For their part, the vehicles set up to buy asset-backed securities were financed by issuing short-term financial debt (commercial paper), which is not included in monetary aggregates. In practice, therefore, there was an increase in credit without any increase in monetary aggregates.

Another paradigmatic case with similar results is provided by temporary sales of securities, also known as repurchase agreements or repos, used by banks to lend each other money using a security as a guarantee. As in the case of securitisation, this practice became an important source of liquidity that helped to increase the supply of credit. Moreover, in the US repos are not included in the traditional measurement of money supply either so that, also in this case, the resulting boost for credit did not lead to an increase in monetary aggregates. As can be seen in the corresponding graph, during the years of strong growth the volume of financial commercial paper and repos increased sharply but, after the crisis erupted, they plummeted and have yet to recover. The traditional measures of money supply shown in the table above therefore underestimate the liquidity available before the crisis and do not reflect its subsequent contraction. Although the expansion in the monetary base by the central banks aimed to replace this lack of liquidity, it has not been enough and, consequently, the pressure on prices is still low.

In short, although the relationship between prices and monetary aggregates seems to have dwindled this is partly due to temporary factors such as those related to the supply and demand for credit. Therefore, as the economic recovery takes hold, both are likely to synchronise again. It is more difficult to determine the role played by the greater integration of global financial markets although, judging by the last few years, central banks seem to find it very difficult to control the liquidity they inject as this is easily directed towards other economies. A lesson that should be borne in mind when evaluating the effectiveness of the measures recently announced by the ECB.

2. We have focused on core inflation to isolate the effect of falling oil prices over the last few months.

3. Monetary base is understood as the amount of liquidity provided by central banks, either in the form of currency in circulation or bank reserves deposited with the central bank.

4. The relationship between the monetary base and money supply is known as the money multiplier.

5. Money supply is understood as the currency in circulation plus currency in its most liquid form; i.e. bank deposits. 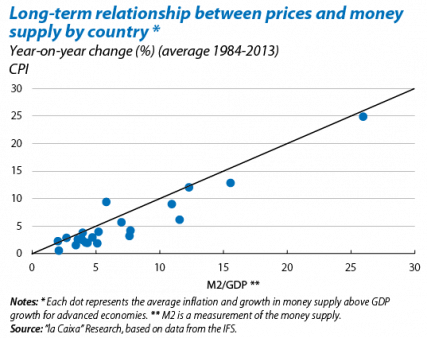 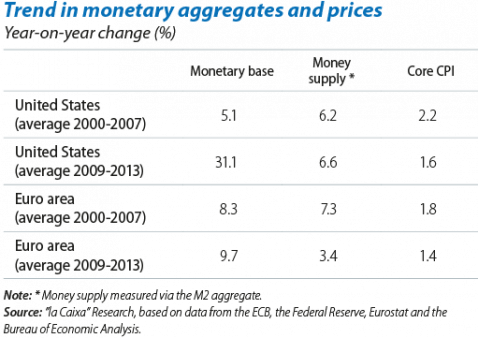 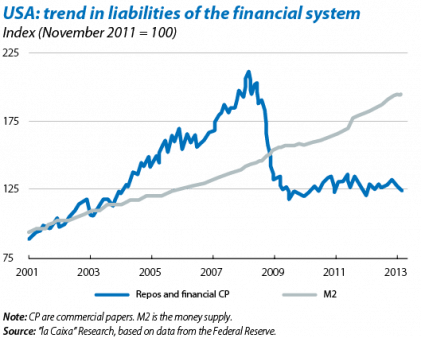