QE comes to the euro area for a long visit

This month the European Central Bank (ECB) has started up an ambitious quantitative easing programme or QE. Its impact on the region's financial markets, in particular the sovereign debt market, is crucial for this unconventional monetary stimulus to reach the real economy. To throw some light on this issue, it is useful to compare the ECB's current QE programme with the one carried out in its day by the US Federal Reserve (Fed). The initial conditions and environment are quite different for both cases so the effects on interest rates for European public debt could differ considerably from that seen in the US. While the impact across the Atlantic was strong (in terms of pushing down yields), concentrated (on bonds maturing within 5 and 10 years) and limited in time, QE in the euro area is likely to be less intense but more widespread and longer in duration. In other words, the main contribution of the ECB's QE will be to prolong the current scenario of very low interest rates for a long period of time, thereby affecting risky assets (such as stock markets) and the euro.

The essential size of these purchases is a good starting point to compare QE in the United States and the euro area. Since it implemented the first of its three QE programmes in 2008, the Fed has increased its balance sheet by 4 trillion dollars, with two trillion being in public debt. This last figure accounts for 12% of the United States' GDP and 17% of its outstanding Treasury market. Sovereign debt purchases within the ECB's recently announced QE programme are initially expected to reach 800 billion euros, equivalent to 8% of the euro area's GDP and 16% of its government bond market. The relative amounts are therefore quite similar. Regarding the impact of the Fed's purchases on Treasury yields, empirical studies estimate that, at their peak, this was between 100 and 120 bps in the case of the 10-year bond, largely attributable to the reduction in the term premium.1 However, when comparing the developments witnessed in yields on Treasuries and those expected in the euro area, two big differences arise between both programmes that should be considered. Firstly, the level of long-term interest rates at the start of each programme. When the Fed decided to undertake large-scale asset purchases, long-term interest rates in the US were between 3.5% and 4.5%. This contrasts with the current environment of very low interest rates in the euro area, particularly in the core countries (at present, the German 10-year bond barely offers 0.3% and its 30-year bond is below 1%). Secondly, the Fed concentrated most of its purchases in bonds with maturities of between five and ten years, aiming to push down the term premium in this tranche of the curve. The ECB's government bond purchases will be much more broadly based, however, taking place throughout the whole debt curve from two to thirty years.

Given the meagre yields in Europe at present, should we therefore conclude that, from now on, the effects of QE on the government bond market will be irrelevant? Not at all. All things being equal, the arrival of such a large demand for government debt in the secondary market due to large-scale purchases by the ECB should push down yields on the euro area's public debt. It is true that any additional descent in long-term interest rates is likely to be limited, but in comparison with the United States, it will probably have a greater effect on ultra-long maturities and for a longer duration. The combination of several factors suggests this scenario will come about. Firstly, investors already expected the ECB would resort to sovereign debt purchases several months ago, leading to widespread drops in public debt yields as investors took up positions in this market. This illustrates how one of the main channels to pass on unconventional monetary policy works: the so-called signalling effect, which now appears to have run out of steam. Secondly, the inclusion of bonds ranging from two to thirty years results in a much flatter curve than in the US; i.e. a decrease in the term premium across all periods, even ultra-long (30 years). This is the result of another channel to pass on unconventional measures, namely the portfolio balance effect, which comes into play when bond markets are at least partly segmented by different maturities and also when there is segmentation by country. In this respect, periphery debt promises higher returns than core debt, so the spread between periphery and German debt may narrow even further. However, whether this actually comes about depends on two important conditions: the positive boost provided by growth in countries such as Spain needs to continue, as we predict, and the elections to be held this year in Spain and Portugal must not destabilise their respective debt markets. Thirdly, the drop in yields that tends to happen after the launch of a large-scale asset purchase programme is announced usually gives way, after a period of time, to an opposite effect. In other words, as quantitative easing progresses and reaches maturity, long-term interest rates will start to rise again due to the expectations formed by investors regarding a recovery in growth and inflation in the future and, consequently, the end of QE itself. Here the channel in operation is the confidence effect. In the case of the Fed's QE3, this happened relatively quickly (as a result of tapering in spring 2013), while the macroeconomic conditions of the euro area, given the ECB's commitment to continue QE until inflation approaches 2%, suggest that this will take longer to happen.

Given the intensification and maintenance of extremely accommodative monetary conditions in the euro area, prices of risky assets will be boosted by favourable capital flows. Essentially, the low interest rates of European sovereign debt and the little probability of them falling much lower provide a clear incentive for investors to restructure their portfolios towards assets with higher risk and expected returns, such as the stock market or corporate bonds. This redirection of capital flows should be seen as a portfolio balance effect by asset type which, together with the aforementioned signalling and confidence effects, constitutes an important channel to pass on unconventional monetary policies. At the same time, the positive news we expect to hear over the coming months in terms of the euro area's economic growth will reinforce the sustained improvement seen in European and the Spanish stock markets. Investors increasing their search for yield will also boost European corporate bond markets since the expected compression of risk premia in this market will lead to larger issuances of corporate debt, which will help companies to enter capital markets under favourable conditions. This revived appetite for risk will also be noticed beyond Europe's borders, particularly in the emerging bloc.2 The use of the euro as a currency to issue debt in emerging countries or to finance carry trade positions in foreign exchange markets will be another of the consequences associated with this highly accommodative context. According to recent figures by the BIS, euro-denominated issuances of corporate debt by companies not resident in the euro area rose by 14.1% year-on-year in 2014 Q3, up to approximately 800 billion euros.

In conclusion, QE in the euro area will strengthen and prolong, for some time, an environment of very low interest rates and abundant liquidity. However, this situation could encourage risky assets to overheat and also excessive leverage, which might represent a future source of instability. Turbulent episodes such as the events occurring in emerging markets after the pre-announcement of tapering in May 2013 illustrate the need to make an even greater effort to guarantee financial stability, both locally and globally.

1. For a description and interpretation of the bond term premium, see the Focus «US Treasury term premiums: not yet, but likely» in the Monthly Report of December 2014. 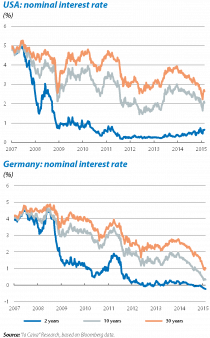 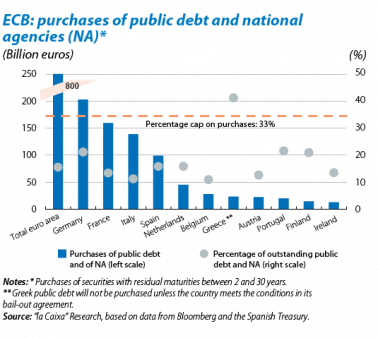