The IMF sees a gradual recovery at three different speeds

The IMF sees a gradual recovery at three different speeds. According to its latest outlook report in April, only marginally worse than what was forecast in January, the world's economy will grow by 3.3% in 2013 and by 4.0% in 2014, led by the emerging economies (with growth above 5% in both years). The large advanced non-European economies will see more moderate growth (the USA, 1.9% in 2013 and 3% in 2014). Bringing up the rear is the euro area, with a predicted drop of 0.3% in 2013 and growth of 1.1% in 2014, hit by the widespread entrenchment of the crisis.

The outlook we predict does not differ greatly from the Fund's forecast. For the USA, we place growth in 2013
around 2.0%. After robust growth in the first quarter, 0.6% quarter-on-quarter at the time this Report went to press,
more moderate growth is forecast for the rest of the year. Better financial conditions and the recovery in the housing market and production investment will support this expansion. However, the persistence of high indebtedness, the slow recovery in employment and the fiscal adjustment (the automatic reduction in public spending whose contractive effects will be concentrated in the second and third quarters) will hinder growth in 2013.

In general, March's activity figures are somewhat worse than expected. Retail sales, without cars or petrol, slowed down, losing part of their upswing in January-February albeit growing by 2.1% year-on-year. Similarly, the Conference Board Consumer Confidence index lost what it had gained in February and its net figure fell below its historical average. The outlook for business is slightly better but this cannot escape the lukewarm environment either. The business indices of the Institute for Supply Management for manufacturing and services lost ground, reaching levels that correspond to economic growth of around 2.0%. In the area of investment, however, we can still see an improvement in 2013, helped by peak corporate earnings and financial improvements with room for investment's contribution to GDP to continue rising.

The labour market is still the greatest burden and also the greatest risk to the US recovery. March's figures were also disappointing with 88,000 new jobs created, less than half the forecast. The drop in unemployment to 7.6% is fundamentally due to a decrease in the labour force. In this respect, the indicator that best reflects the situation of the labour market is the employment-population ratio (the proportion of people that are working compared with the total population aged over 16), which includes unemployment and the contingent of discouraged workers who have left the labour force (employees or registered unemployed who are actively looking for work) who are not recorded as unemployed. Between December 2006 and November 2010, the employment- population ratio went from 63.4% to 58.2% and has remained almost unchanged since then (58.5% in March 2013). All this means that the unemployment rate is expected to fall very slowly as these discouraged and under-employed people will absorb a significant part of the jobs generated by the economy, hindering a drop in the unemployment rate. The high proportion of long-term unemployed, who find it particularly difficult to get another job, will be an additional burden.

This weakness in employment, together with the moderation of prices in March, gives the Fed arguments to maintain the expansionary tone of its monetary policy. The CPI advanced by 1.5% year-on-year in March (2.0% in February) and core inflation by 1.9% (2.0% in February). These figures, and the marked drop in oil prices, have removed the prospect of inflationary tensions in 2013. This guarantees that the Fed's QE3 will continue, within an environment of moderate growth in spite of the gradual recovery in construction and employment.

Housing has remained apart from the lukewarm figures for March and is consolidating its recovery, spurred on by the reduction in the surplus supply, the upward trend in the formation of households and better financial conditions. The good figures for housing starts indicate that construction will liven up considerably while prices continue to pick up gradually.

Japan has embarked on its monetary revolution. Haruhiko Kuroda, the new governor of the Bank of Japan, aims to take the monetary base from its current level of 139 trillion yen to 270 trillion (2.1 trillion euros) by December 2014, which means going from 29.4% to 57.3% of Japan's GDP. This increase will be achieved via public debt purchases, including long term. In absolute terms, this measure is comparable with the Federal Reserve's quantitative easing whose assets represent 18.9% of the US's GDP (2.3 trillion euros). Such a drastic measure is aiming to offset the structural surplus of private savings, mostly in the hands of companies, via increases in the current balance and greater growth and investment.

The first consequence of this monetary expansion has been the depreciation of the yen, accompanied by significant stock market gains. Given that Japan's leading firms are exporters, they benefit from a cheaper yen as it makes them more competitive. This should boost the current surplus, channelling private savings abroad. The ultimate aim of monetary expansion is to put a stop to deflation, which has now lasted 15 years. An environment of moderate inflation and low interest rates would stimulate growth and investment and would provide an internal exit for surplus savings.

Deflation, which continued in March, has prevented nominal growth and has led to huge public debt. Real GDP, discounting price variations, rose by 9.0% between the end of 1997 and December 2012 but GDP in current yen fell by 10.1%. This fall, together with successive fiscal stimuli, has taken public debt to 236% of GDP. Here lies the biggest risk for Kuroda's monetary expansion: if inflation grew more than expected, it might generate a lack of confidence among Japanese savers, who finance most of this debt, and they might take flight from the yen. If this flight were substantial, Japan might be forced to raise the interest rate on its debt.

Structural reforms will be crucial in the medium and long term. The success of Japan's monetary expansion and fiscal stimuli in boosting growth depends on the implementation of the third pillar of Abenomics: structural reforms. Otherwise, in the long term, the current surplus will not be enough to channel this surplus of corporate savings, being limited by the export competitiveness of its Asian neighbours such as South Korea and China. Production investment, at 13.0% of GDP compared with 10.9% in the USA in 2012, will not be able to make any further progress without structural reforms to boost growth and reinvest corporate earnings.

The emerging economies will continue to lead global growth in 2013 in spite of the relatively disappointing indicators for activity recently, which are showing a more disparate trend. China is the emerging country with the most robust growth. Although its 7.7% advance year-on-year in the first quarter indicates a more gradual reacceleration than expected (see the Focus on China), its growth contrasts with the slowdown in India, Russia and particularly the anaemic growth of Brazil. Mexico and Turkey, well placed to grow by around 3.5% in 2013, are in-between these two poles, with room for more stimuli if necessary.

Inflationary tensions are appearing in those economies growing the least as they have less and less room for monetary stimuli. China has once again set itself apart from the rest with a CPI of 2.1% in March, but high inflation persists in Russia and India, although in this case it is falling. In Brazil, the CPI speeded up to 6.6% in March, higher than the government's target of 6.5% and forcing the central bank to raise the official interest rate by 25 basis points in spite of low growth. Mexico is once again in the middle ground although March's surprise of 4.3% CPI leaves it above the central bank's target of 4%.

In addition to fiscal and monetary stimuli in the short term, the emerging economies also need far-reaching structural reforms to embark upon a robust, sustainable path of growth. For the time being, only Mexico has started. Following its labour and educational reforms at the end of 2012 will come the reform of the telecommunications sector in 2013, leaving fiscal and energy reform for later. Nonetheless, recent discrepancies between the main parties have interrupted this reform process, a stoppage that we believe is temporary. 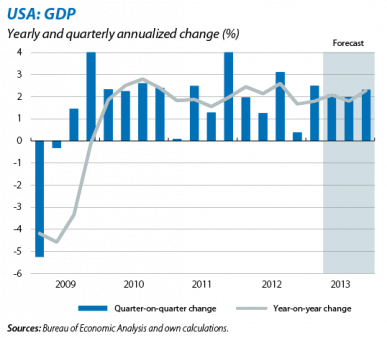 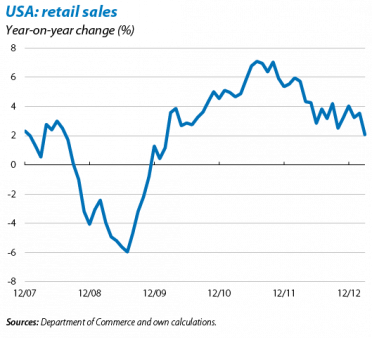