• Latin America is on course to experience its worst phase of growth since the «lost decade» of the 1980s.

• The problems are not just contextual: in the past the continent benefited from a combination of reforms and demographic dynamism that looks unlikely to continue.

• The pattern of economic growth, together with the lethal combination of high inequality and the perception of a lack of opportunities, are the underlying factors giving rise to social instability.

In 2019, growth in Latin America will have stood at 0.1%, the worst among the major emerging regions. Furthermore, this is not a one-off bad year: the average growth rate for the decade 2009-2019 is the worst since the grim «lost decade» of 1980-1990. If we also add that in 2019 the region has been ravaged by severe social and political unrest, the doubts over Latin America are amplified. In this situation, three major questions arise: what are the causes of this poor economic performance? What is causing the surge in social and political instability? What are the short- and long-term prospects for the region?

Latin America is suffering from poor growth due to a combination of three factors: lower commodity prices, which have weighed down a region that is highly dependent on such exports, the impact of the uncertainty shock affecting international trade and the effects of political and social instability on confidence. Without a doubt, these three explanations are relevant, but perhaps not as much as one might think.

For instance, according to the historical relationship between commodity prices and regional growth, Latin America would have grown by 1.6% in 2019, not the 0.1% currently estimated. Furthermore, besides a few specific countries such as Mexico, it is not clear that the uncertainty shock has had such a negative impact to date. As for the social unrest and political shifts that have marred sentiment about the region, given that they mostly occurred in the latter phase of 2019, they appear to be an aggravating factor, rather than an underlying cause.

In fact, if we take a less shortsighted view, 2019 marks the culmination of a series of bad years that have already led to talk of the (possible) «second lost decade». When we adopt this structural perspective, it becomes clear just how different the pattern of growth in the region has been. In particular, in the period 2000-2015, labour productivity growth in Latin America was 0.6% per annum, while in emerging Europe and Central Asia it was 3.2%, and in the rest of Asia, 6.1%.1

The route cause of Latin America’s problems now becomes clearer: the continent enjoyed good years in the past not only because commodities were experiencing an expansive cycle, but also because the region’s demography provided strong support for growth. Moreover, the 1990s were a period of major structural reforms (independence of the central banks, strict fiscal rules that were respected, liberalisation and opening up to trade, etc.). These made a decisive contribution to improving the region’s macroeconomic credibility (and, in particular, to containing inflation expectations), as well as to anchoring it within the system of global trade. It thus seems quite clear that from the mid-2000s the region was living off the benefits of the efforts of the past.

The irruption of social conflict has affected Chile, Colombia, Bolivia, Peru and Ecuador. At first sight, it might seem tempting to treat each case in isolation. However, even though one cannot deny that there are idiosyncratic factors at play, it is also certainly true that there is an underlying factor uniting all this social and political unrest: the lack of opportunities offered by an insufficiently inclusive form of growth.

As is well known, Latin America has some of the countries with the highest inequality in the world. According to the World Bank, of the 20 countries with the highest Gini index, 12 are in Latin America. What is less well known is that inequality has been declining in recent decades, albeit at an ever slower pace. Why, then, the current episode of instability? The key trigger is the slowdown in economic growth: inequality was tolerated in the past because the well-being that Latin America generated by growing at a rate of 3% or 4% reached large swathes of society. When this mechanism grinds to a halt, a widespread perception of social injustice emerges: on top of income inequality, inequality of opportunities becomes perceived as unacceptable.

We analysed the issue of inequality of opportunities in
a previous Dossier.2 In that analysis, it was determined that societies can tolerate a relatively high degree of inequality, provided they consider that it reflects a disparity in the distribution of talent. What generates a perception of injustice is when this inequality is linked to factors such as a person’s family background, or other factors unrelated to an individual’s talent and capabilities. It seems clear that this perception is latent in phases of prosperity, but is activated in periods of lower well-being, such as the current one. In addition, the empirical evidence cited in the aforementioned Dossier identified several Latin American countries as being among those with the highest levels of inequality of opportunities.

However, shifting towards a more inclusive model of growth is no easy task, especially if it must be done in a context of limited economic dynamism. Thus, the political and social problem will likely persist for the foreseeable future, although not necessarily continuously.

In the short term, the growth forecasts point towards a smooth recovery: while in 2019 there was practically no growth at all, in 2020 GDP could grow at a modest, but more positive, 1.6%. Nevertheless, moderate as it is, this growth is subject to major risks. The most significant among them are how the trade dispute between the US and its trading partners plays out and the impact of the coronavirus.

The trade deal between the US and China will help to reduce global uncertainty, and this will benefit Latin America, but it also entails some negative elements. Specifically, the agreement determines that China will increase its purchases of US soybeans in 2020 by as much as 66% compared to 2019.3 Given the magnitude of this increase and the fact that it is in a sector with relatively rigid demand, it is reasonable to think that in 2020 China will replace the soybeans it purchases from other producing countries with those from the US. Brazil, which supplies 54% of China’s imported soybeans, could be one of those other producers to be the hardest hit: the reduction of exports to China could deduct up to 0.4 pps from the country’s growth in 2020 (the impact on Latin America would be 1 decimal point).4

A second risk derives from the effects of the coronavirus in China and, by extension, on the global economy. According to calculations by CaixaBank Research, the epidemic could subtract between 0.4 and 2.0 pps from China’s growth in 2020, which would translate into between –0.2 and –1.0 pp for Latin America.5

That said, the real challenge lies in the long-term outlook. Demography has been the key factor driving much of Latin America’s growth in recent decades, while it was productivity growth that was wavering, lying at very low levels. Looking ahead to the next decade, the prospects on both fronts are not too promising. Latin America’s demography is entering a stage of reduced dynamism: whereas between 2009 and 2019 the growth of the working-age population for the five main countries of the region was 1.3% per annum, in the next 10 years it will be 0.6%.

It is also hard to be optimistic with regard to productivity. Its greatest limiting factor is the prevalence of the informal economy. In some countries, this can account for as much as half of the working population, and it does little to encourage companies and workers to improve human capital or to invest in intangible assets.

While it is difficult to reach an encouraging conclusion, this does not rule out that if the previous boom was what followed the fateful «lost decade» of the 1980s, then perhaps the current «second lost decade» could help to sow the seeds of prosperity in a region that deserves to live better.

2. See the article «Equal opportunities: levelling the playing field for everyone» in the Dossier of the MR03/2018.

4. The impact could be less, given that there are doubts over both parties’ ability to execute the agreement: the increase in US soybean production is a demanding target and China’s actual purchasing capacity may be lower in the context of a drop in soybean consumption driven by a reduction of pig livestock.

5. See the Focus «The economic impact of the dreaded coronavirus: should we be worried?» in this same Monthly Report. 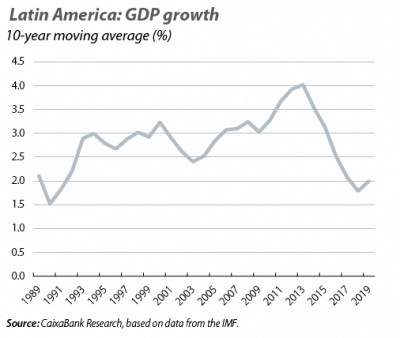 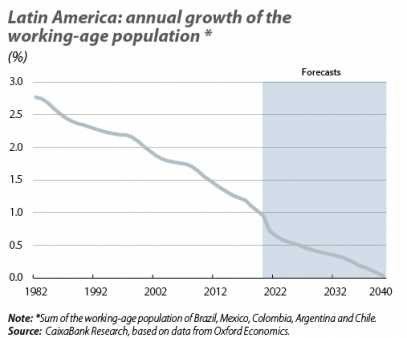