Equal opportunities: levelling the playing field for everyone

Let us begin with a fundamental question: when is income inequality tolerated in a society? The logical answer: when it is not excessive. So the question now becomes: at what level does inequality become excessive? One way to tackle this is to ask citizens what they believe would be the ideal distribution of wealth and compare it with the current situation. This is precisely what Michael Norton and Dan Ariely have done, and with surprising results. They asked people from the US, a country with relatively high wealth inequality, to choose the distribution they preferred. Their main choice was a considerably more equitable alternative (specifically, a slightly modified version of Sweden, presented to subjects as «Equalden»).1 If the gap between the ideal and real situation is so wide, why is it tolerated? There are various explanations but one probably widely accepted answer is that inequality is tolerated provided the reason behind it is fair. A recent experiment with children supports this explanation.2 Five prizes (erasers) had to be shared between two children who had done the same work. The other children in the class were asked how to distribute the erasers and they asked for one eraser to be eliminated so that the prizes could be awarded equally. But when the experiment’s organisers explained that one of the children had worked harder, they readily agreed to give three erasers to the child who had worked the most (and two to the child who had worked less). This unequal reward was therefore acceptable but only if it was for a good reason.

Far from being an isolated finding, this experiment is consistent with the core notion of attempts by different social scientists to conceptualise what constitutes a fair society. Although the vast literature diverges in many respects, there is significant consensus that equal opportunity is crucial to the concept of social justice. High income inequality is therefore acceptable in a society provided there is also a high degree of equal opportunity.

The above approaches to the concept of equal opportunity may not be the most adequate. However, one solid and relatively well-accepted starting point is the definition provided by John Rawls. He asserts that individuals with the same levels of talent and ability, and exhibiting the same ambition to use them, should have the same prospects of success irrespective of their initial position in society.3 A whole theoretical structure has been built up based on this idea that significantly furthers our understanding of the practical implications of the equal opportunity issue. In particular, John Roemer adopts a «Rawlsian» view on asking the key question that concerns us here; namely distinguishing between morally acceptable and unacceptable inequality.4 Roemer’s core idea, and that of many economists in his intellectual wake, is that we need to differentiate between personal effort and circumstances. In a fair society, those inequalities resulting from individual decisions will be acceptable, but not those resulting from circumstances beyond the will of the individual. The immediate implication is that public policies must compensate for inequalities resulting from circumstances but not other kinds of inequality.

However, in order to set this boundary between morally acceptable and unacceptable inequality, we must first consider the role of the family in creating inequalities, a critical aspect for Roemer and for almost all inequality literature. Specifically, the author identifies four channels through which parents affect the opportunities of their children. Firstly, the provision of social connections or contacts. A second channel is the formation of beliefs and skills through family culture and investment made in developing children’s skills. Thirdly, there is the genetic transmission of ability. And, finally, families mould the formation of preferences and aspirations of their children.5

Thus, there are four large sources of inequality. But are they all equally reprehensible from the point of view of social justice? The first channel, family contacts, is unlikely to be considered as related to personal effort. This would therefore be a circumstance that leads to morally unacceptable inequality. Perhaps the second and third channels enjoy less consensus of opinion, but surely a majority would still believe that inequality is unfair when it results from a lack of investment by parents in developing their children’s abilities, by them passing on beliefs that limit their life opportunities or the limitations suffered by children who have inherited genes which make them less able than others in their generation. The last channel, however, is perhaps further from being universally accepted since it seems complicated to establish the criterion of justice when assessing a family’s influence on their children’s preferences and, consequently, identify a moral need for compensation.

At this point it is useful to refer back to an aspect mentioned previously, namely the relationship between equal opportunity and social mobility. We have already mentioned that, in theory, high equality of opportunity could co-exist with low social mobility. Now we realise that, in order for both aspects to be totally equated, one prior condition is that the four aforementioned sources need to be compensated.

Briefly, when attempting to discriminate between acceptable and unacceptable inequality, the conceptual debate struggles with difficulties of a moral nature almost right from the start. For example, one fundamental issue with far-reaching ramifications is whether, in a society with high equal opportunity, mechanisms are required to compensate the relationship between effort, talent and reward. If someone’s talent is vastly superior to someone else’s, should they also receive a comparably greater remuneration or only up to a certain cut-off point? The answer can only come from the society itself but it is evident that, first of all, society must realise there is a decision to be taken.

Given these conceptual problems, it seems more than necessary to attempt to shed light on the debate with empirical evidence. Unfortunately, there is not much to choose from. Perhaps the best work to date has been carried out by Francisco Ferreira and his co-authors, who looked at eight different studies to compare the inequality of opportunities in 41 countries.6 The basic difficulty lies in the fact that what we are interested in, namely effort (an acceptable or justified case of inequality) cannot be directly observed. We can see the outcomes (usually income inequality) and family circumstances (household income, household consumption, etc.) but not individual effort. The empirical strategy applied is to see to what extent income inequality can be attributed to circumstance variables, with the unexplained part (technically, the residual) approximating individual effort.

Given the incipient nature of this empirical analysis, the conclusions are necessarily tentative. However, it appears that a significant portion of income inequality observed in the world is not due to individual effort but to factors beyond the person’s control, such as family circumstances. There is also considerable cross-country variation; for instance, Brazil’s inequality of opportunity more than triples Finland’s. A second conclusion is that there is a positive correlation between inequality of opportunities and income inequality. As addressed in the article «Jay Gatsby’s American Dream: between inequality and social mobility» in this Dossier, social mobility studies point to what is called the Great Gatsby Curve which relates low social mobility (resulting from circumstances, in this literature) with high inequality.

Ortega and Gasset once said «I am I and my circumstance; and, if I do not save it, I do not save myself». Seen in a different context, the Spanish philosopher sums up the essential conclusion to this debate: equal opportunity ultimately means levelling the playing field so that (uncontrollable) circumstances are as minor as possible and people’s lives should be, above all, the result of free will, of assiduously cultivated talent and hard work. 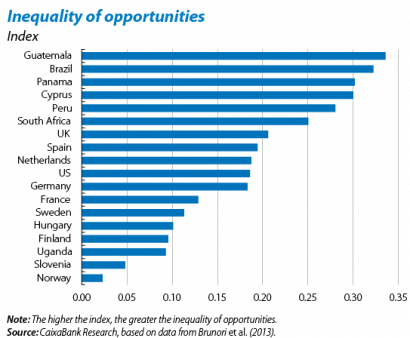 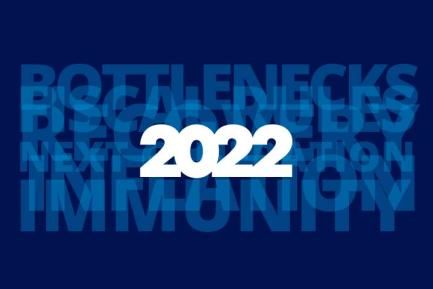