The impact of ageing on economic growth in Spain and Portugal

Having described the phenomenon of population ageing in the first article of this Dossier, in this second article we analyse how ageing has influenced the economic growth of Spain and Portugal in recent years, as well as its implications for the future.

The international evidence indicates that population ageing results in lower economic growth. On average, the reduction in the working-age population is expected to weaken annual GDP growth by a considerable 0.64 pps in advanced countries up until 2025 (compared to the long-term historical trend).1 Similarly, it is estimated that the growth of GDP per capita will be reduced by 0.25 pps annually in the 2030s in OECD countries.2

To analyse the effect of ageing on economic growth in Spain and Portugal, we estimate the impact of the ageing of the population, defined as the ratio between the number of people aged 60 or over and the number of people aged 20 or over, on GDP per capita. Obtaining a measure that helps us to quantify this impact is fundamental for understanding how the current demographic trends will affect our level of well-being and that of future generations in years to come.

How can we separate the impact of ageing on economic growth from other factors?

In order to accurately estimate the impact of ageing on economic growth, we must address a problem of reverse causality, since it is possible not only that ageing has an impact on economic growth, but also that the latter has an impact on ageing. For instance, a region that is growing more than its surroundings can have a less aged population because it offers more job opportunities to young people. Similarly, we want to separate the impact of ageing on economic growth from other variables that might also affect it and which, at the same time, are related to ageing. For example, the quality of public health services has a positive influence on economic growth (a healthier population is more productive) and, at the same time, it has a positive correlation with ageing (a healthier population lives longer).3,4

This result allows us to calculate the cost that ageing has had in Spain in the past. During the 1990s and 2000s, ageing did not grow significantly, so its impact on economic growth was modest. However, in the last decade (2010-2019) ageing increased by 4.7 pps. This led to economic growth being 0.6 pps lower in annualised terms compared to the economic growth that there could have been had ageing remained constant during this decade. This means that in 2019, for instance, in the absence of the increase in ageing, the annual growth of GDP per capita would have been 2.2% instead of the 1.6% observed. These results are clearly shown in the first chart (see previous page), in which the annual growth in the observed GDP per capita and its counterfactual without ageing almost overlap throughout the first two decades analysed, but clearly diverge starting from 2010.

The impact of ageing in the future

Having analysed what has happened in the last three decades in Spain, we ask ourselves what will happen in the next three. Combining the results of our estimates with population projections by age group from the National Statistics Institute, which forecast that Spanish society will continue to age, our estimates show that the detrimental impact of ageing on economic growth observed in the last decade will persist in the current decade and in the next. In annualised terms, ageing will reduce economic growth by 0.7 pps in the current decade5 and by 0.6 pps in the next. Looking ahead to the 2040s, since the population will already be very aged, the forecast is that ageing will have less of an impact on economic growth. This is shown in the second chart, in which the last bar is smaller than the previous two.

In short, our estimates for Spain and Portugal show that ageing has a considerable, negative impact on economic growth. In the case of Spain, this impact has been felt since the last decade and will continue to be felt in both the current and the next one.

3. In order to identify the relationship of interest and solve these problems, we use an instrumental variable defined as predicted ageing, which is built using demographic variables that date back to 10 years earlier. More specifically, we estimate the following equation:

\(\triangle\log\;\gamma_t\;=\delta_1\;+\;\delta_{2\;}\ast\;\triangle\log\;Elderly\;Population\;Ratio_t\;+\;\delta_{3\;}\ast\;\triangle\log\;X_t\;+\;\delta_t\;+\;\triangle\varepsilon_t\), where Yt is the economic variable of interest, the Elderly Population Ratiot is the proportion of individuals aged 60 or over, Xt is a set of control variables (proportion of employees in each economic sector and migratory flows between regions) and δt represents fixed year effects. We estimate how the increase in ageing that occurred in each decade (based on demographic variables that date back to 10 years earlier and using changes registered over 10-year periods, due to the fact that demographic variables change very slowly) affects the growth of GDP per capita in the same period.

4. Our estimation method is very similar to that proposed by Maestas et al. (2016) for the case of the US (see N. Maestas, K. Mullen and D. Powell (2016). «The effect of population aging on economic growth, the labor force and productivity». NBER Working Paper Series).

5. This number is comparable to the one estimated by Maestas et al. (2016), who determined that, for the same decade and in annualised terms, ageing will reduce economic growth by 0.6 pps in the US. 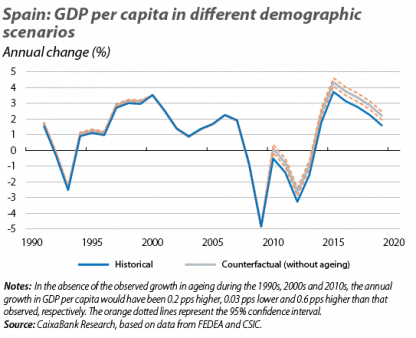 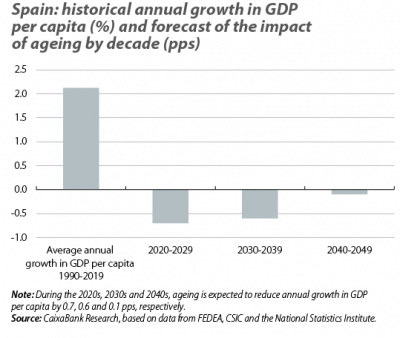