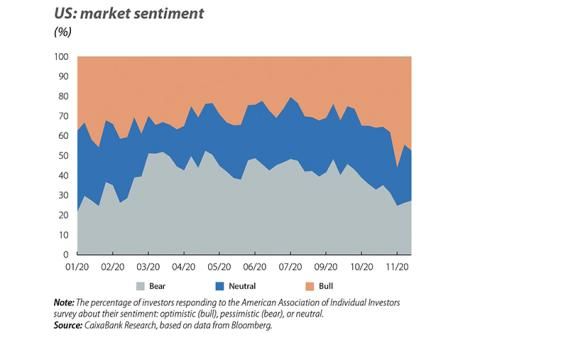 The US election and hopes about vaccines fuel risk appetite

The result of the US presidential election was welcomed by investors, anticipating a vigorous fiscal stimulus to support the economic recovery and a less belligerent tone in international relations. Furthermore, in November the preliminary results of three potential COVID-19 vaccines were published, the high efficacy of which led investors to anticipate an improved economic outlook for 2021. All of this resulted in greater risk appetite and a general rise in the values of financial assets more closely tied to the business cycle. In particular, stock market indices in the major advanced and emerging economies rallied, the Brent oil price rose to levels not seen since March, and most currencies appreciated against the dollar. These trends were also supported by the expectation that the central banks will continue to offer accommodative financial conditions. Nevertheless, the environment remains demanding and uncertainty is very high, most notably in relation to the evolution of the pandemic in this second wave (which is likely to cause declines in GDP in Q4), but also because of other factors such as the Brexit negotiations and the EU’s recent tensions with Poland and Hungary, which have stalled the approval of the Next Generation EU plan. 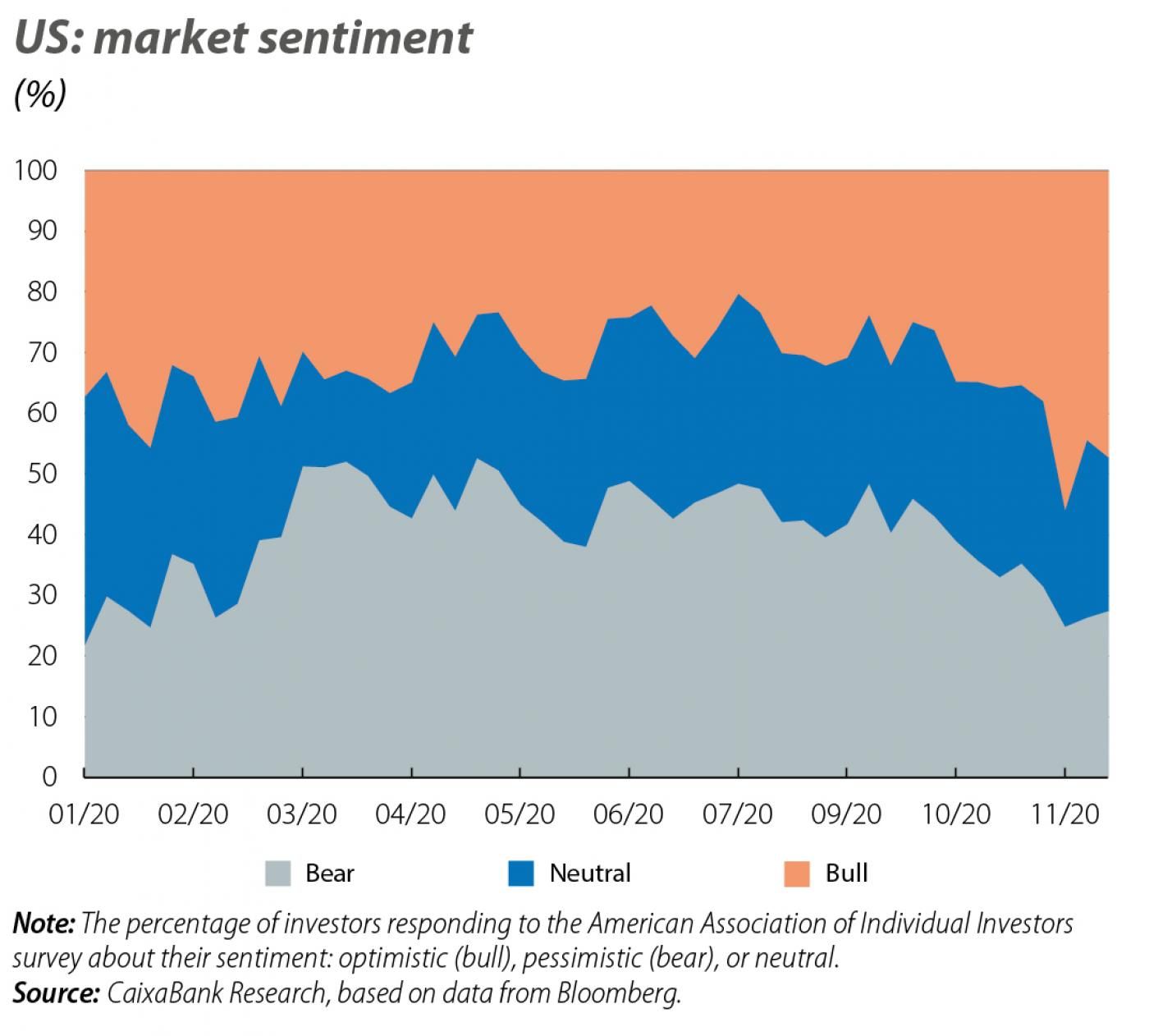 The recovery of the stock markets accelerates in November

This greater risk appetite was clearly evident in the performance of the major stock market indices, which in some cases ended the month with the biggest monthly gains ever recorded (the Eurostoxx 50 and Ibex, for instance). Of particular note were the gains registered in sectors more closely linked to the business cycle, which had been harder hit since the outbreak of the pandemic. For instance, sectors such as energy (closely linked to oil prices) and finance enjoyed significant rallies and moderated the declines amassed in the year to date. In contrast, the gains were smaller in the basic consumption and health sectors, which had managed to weather the pandemic somewhat better. By region, the gains were greater in the euro area (Ibex 35 +25.2%, PSI 20 +16.7%, and Eurostoxx 50 +18.1%) than in the US or emerging economies (S&P 500 +10.8% and MSCI Emerging Markets index +9.2%). Nevertheless, most indices in the Old Continent remain below the levels of the beginning of the year, unlike in the US and China. 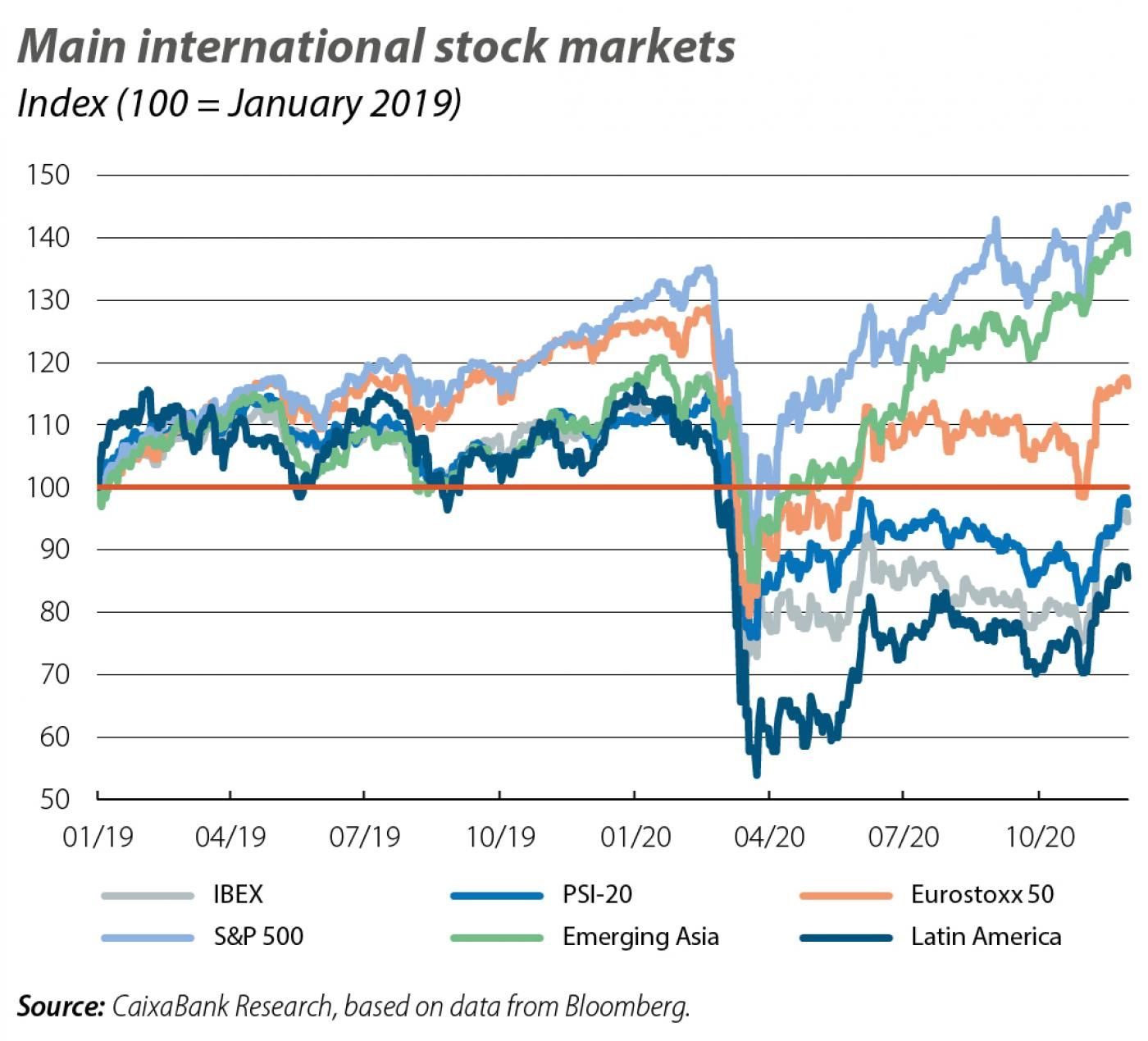 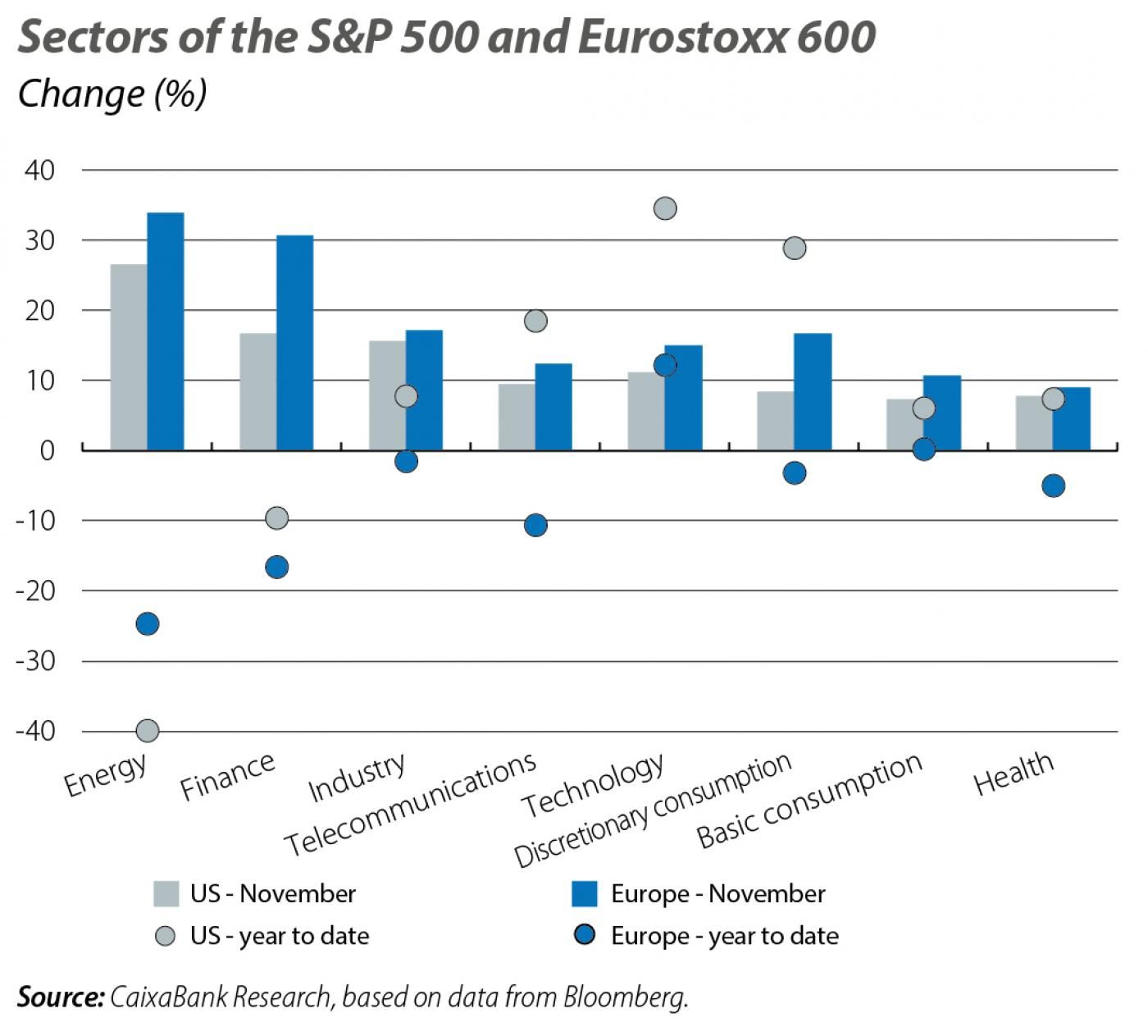 After remaining in the 37-43 dollar range since the end of summer, in November the price of a barrel of Brent oil reached 48 dollars, a level not seen since March. This increase was supported by the widespread improvement in investor sentiment and the actions of OPEC and its allies. In particular, the crude oil price was hoisted up by the expectation that OPEC and its allies will re-adjust production levels to offset the weak demand over the coming months (OPEC and its allies meet in early December to take a decision). 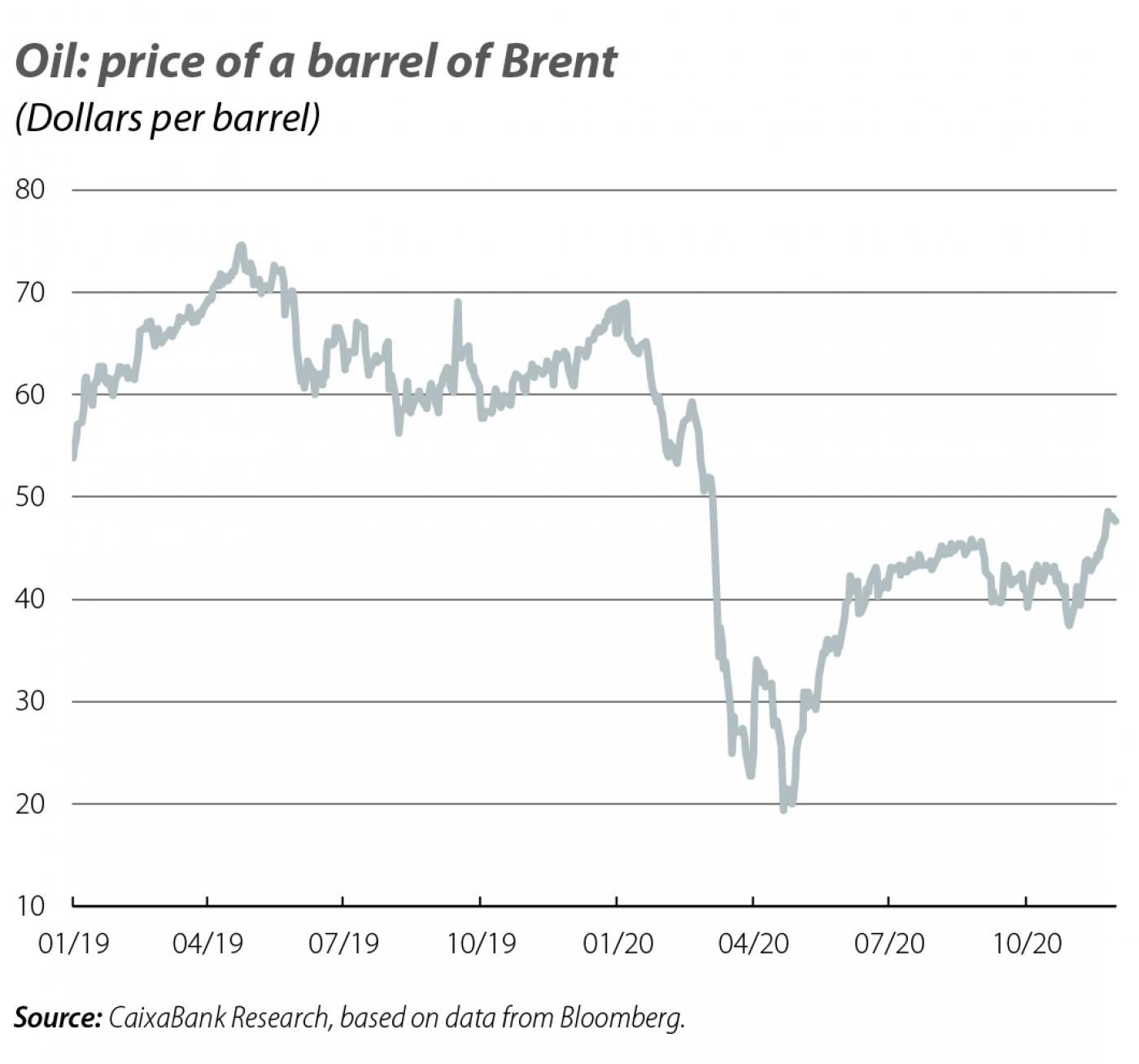 Emerging currencies gain strength, although there are some pockets of instability

In November, the set of emerging currencies as a whole appreciated against the US dollar by almost 4%. One of the currencies that appreciated the most was the South African rand (+5.0%), despite a decline in the country’s debt rating and uncertainty surrounding various African countries’ ability to repay sovereign debts. In Turkey, meanwhile, the change of leadership in both the central bank and the finance ministry was well received by investors and managed to stabilise the depreciation of the lira. In addition, thanks to a 450-bp interest rate hike implemented by the central bank, its currency appreciated by around 7% in the month as a whole. In advanced economies, meanwhile, currencies considered safe-haven assets (namely the Japanese yen, the Swiss franc and the US dollar) weakened as a result of the increased risk appetite. The euro thus managed to exceed 1.19 dollars, while the pound sterling strengthened slightly in a month with little sign of progress in the Brexit negotiations. 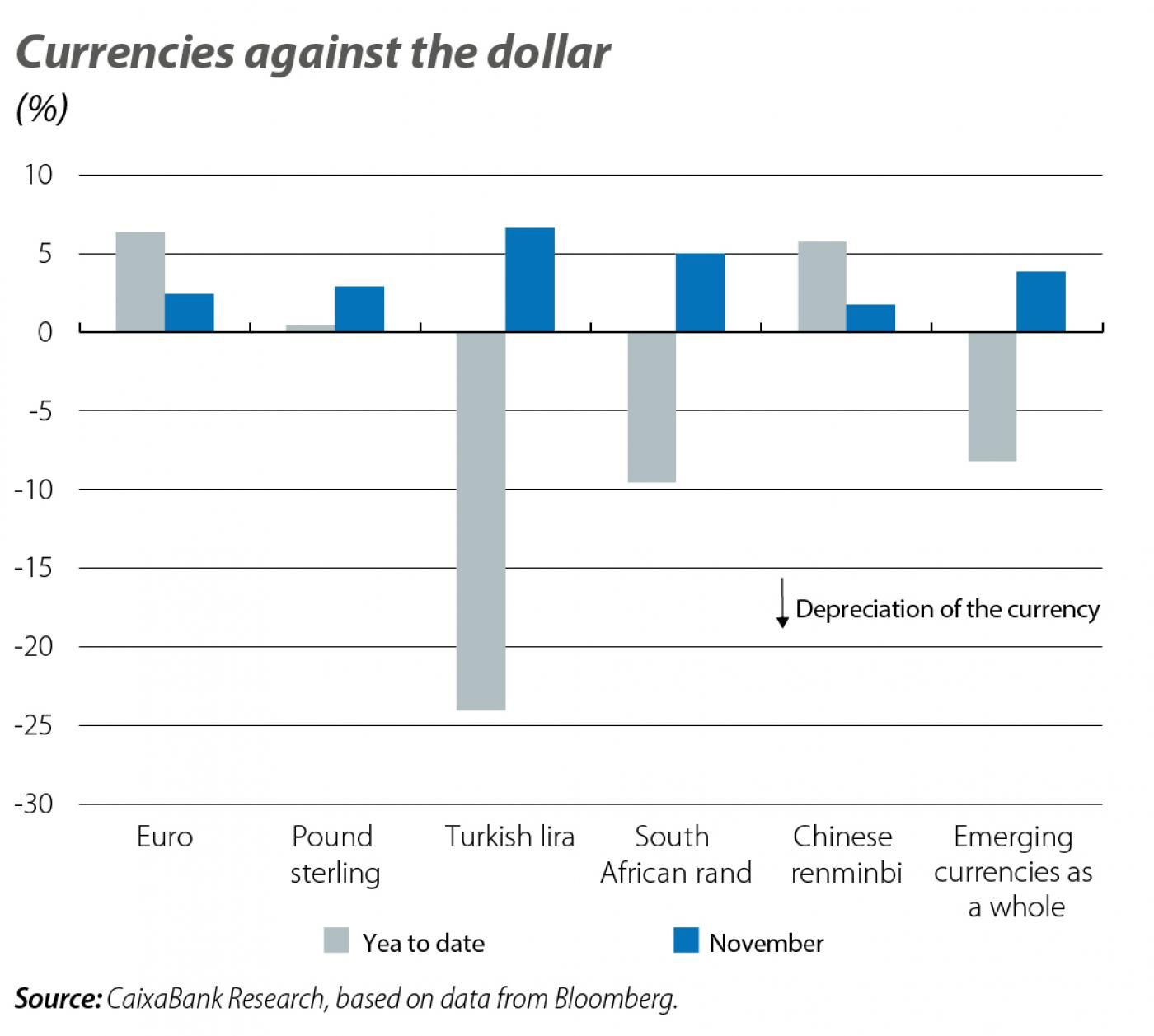 After the ECB’s last meeting, Christine Lagarde made it clear that the monetary institution would offer new monetary stimuli at its meeting on 10 December. Based on the speeches given by members of the Governing Council and the minutes of the last meeting, the ECB’s main tools will most likely include asset purchases and liquidity injections, articulated through the PEPP and the TLTROs, respectively. In particular, the ECB is likely to increase the scale of these programmes (by increasing the maximum volume of assets it can acquire and offering new rounds of TLTROs), as well as their duration (prolonging net purchases of assets under the PEPP and the attractive conditions of the TLTROs until at least the end of 2021). While the ECB has not ruled out other tools, such as an interest rate cut or an acceleration in the pace of purchases through the APP, these options appear less likely, as well as less effective. The Federal Reserve, meanwhile, is studying the possibility of offering an even more accommodative monetary policy, as was made apparent in the minutes of the October meeting. Some of the strategies being considered by the Fed include the possibility of increasing the monthly rate of net purchases of treasuries and MBSs (currently 120 billion dollars), increasing the average maturity of the assets that are purchased (buying more long-term treasuries seems the most likely option), extending the horizon of net purchases and/or providing greater clarity on the future path of asset purchases. Thus, both central banks are determined to extend a highly accommodative financial environment with interest rates at very low levels. 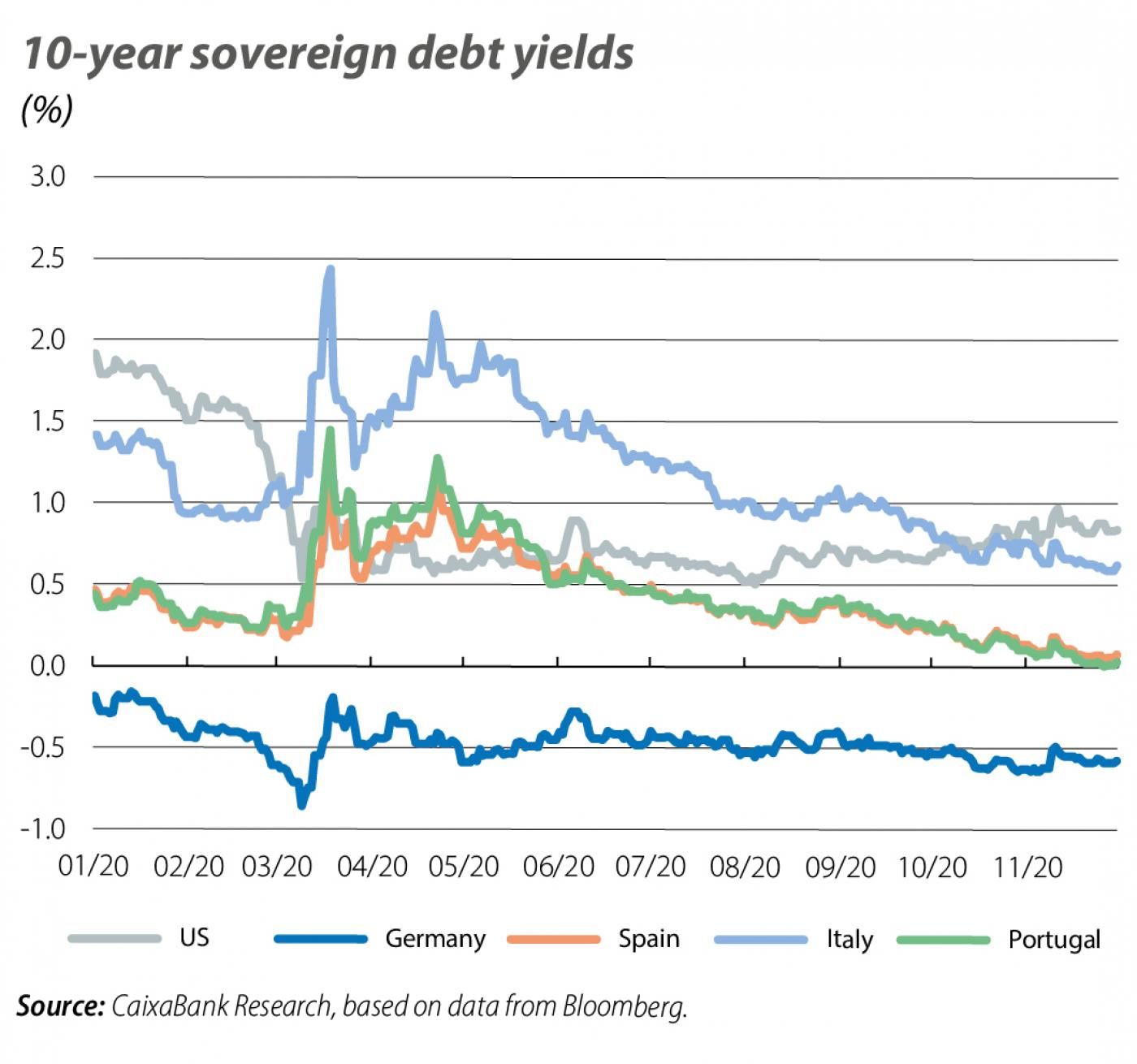