The global V-shaped recovery, as in V for vaccine 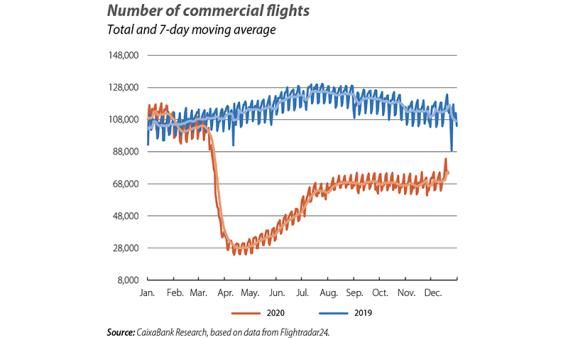 V for vaccine, of course. If everything goes as planned, by the time this Monthly Report sees the light, vulnerable people across Spain, Europe, Asia and the Americas will already be receiving the vaccine. This is an unprecedented medical success: a vaccine against a coronavirus (a type of a virus that is difficult to combat, as demonstrated by the poor effectiveness of the vaccines against SARS or MERS), developed in a matter of months (not years, as is usually
the case) and based on an innovative technique (known as messenger RNA) authorised for use in humans. Thanks to the vaccine, the global outlook is reasonably positive: for 2021, CaixaBank Research predicts global growth slightly above 5%, compared to an estimated drop in GDP of 4% in 2020. Yet, in many of the world’s economies (such as the major advanced European economies; India, among those of Asia, or Brazil and Mexico, in Latin America) the loss of wealth in 2020 will not yet be fully recovered in 2021. One way to look at this is in terms of «lost mobility», which can be approximated with the fall in flights, a good proxy for the globalised flow-based economy in which we operate. 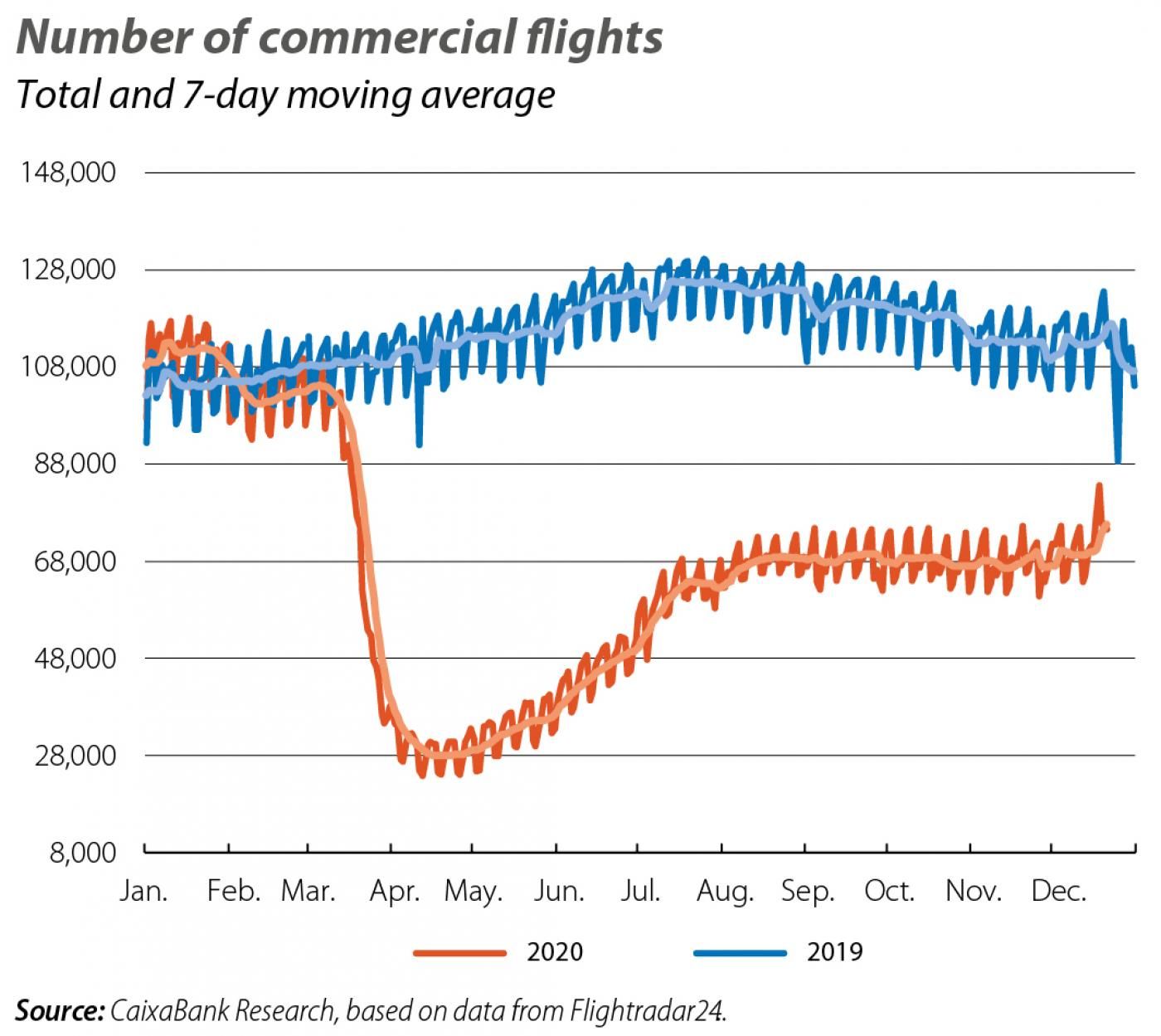 2021 will be a very different year

And this is already apparent in the latest trends. For months we have been able to describe the economic recovery that has taken place following the great lockdown of the spring in two words: uneven and unbalanced. It is uneven in the geographical sense: with different degrees of recovery in different countries; and it is unbalanced between sectors, due to the fact that industry and services had followed different paths: a more intense path in the secondary sector and a more fragile one in the tertiary sector. However, the recovery is changing, at least in terms of its geographical and sectoral distribution. This can be seen in the PMIs, which serve as indicators of economic activity. Following a sharp rise last spring, geographical dispersion in the pace of economic activity has now declined significantly (although the second wave, with its new measures restricting mobility and activity, has led to a slight rebound in the degree of disparity in recent months). Something similar is occurring with the difference between the rate of economic activity in services and in industry, which has declined significantly after reaching a peak in April, although it increased somewhat in the final stages of 2020 just like the degree of disparity in the rate of global economic activity did. Having set the scene with the big picture, a more in-depth review of certain key economies allows us to paint a more detailed picture. 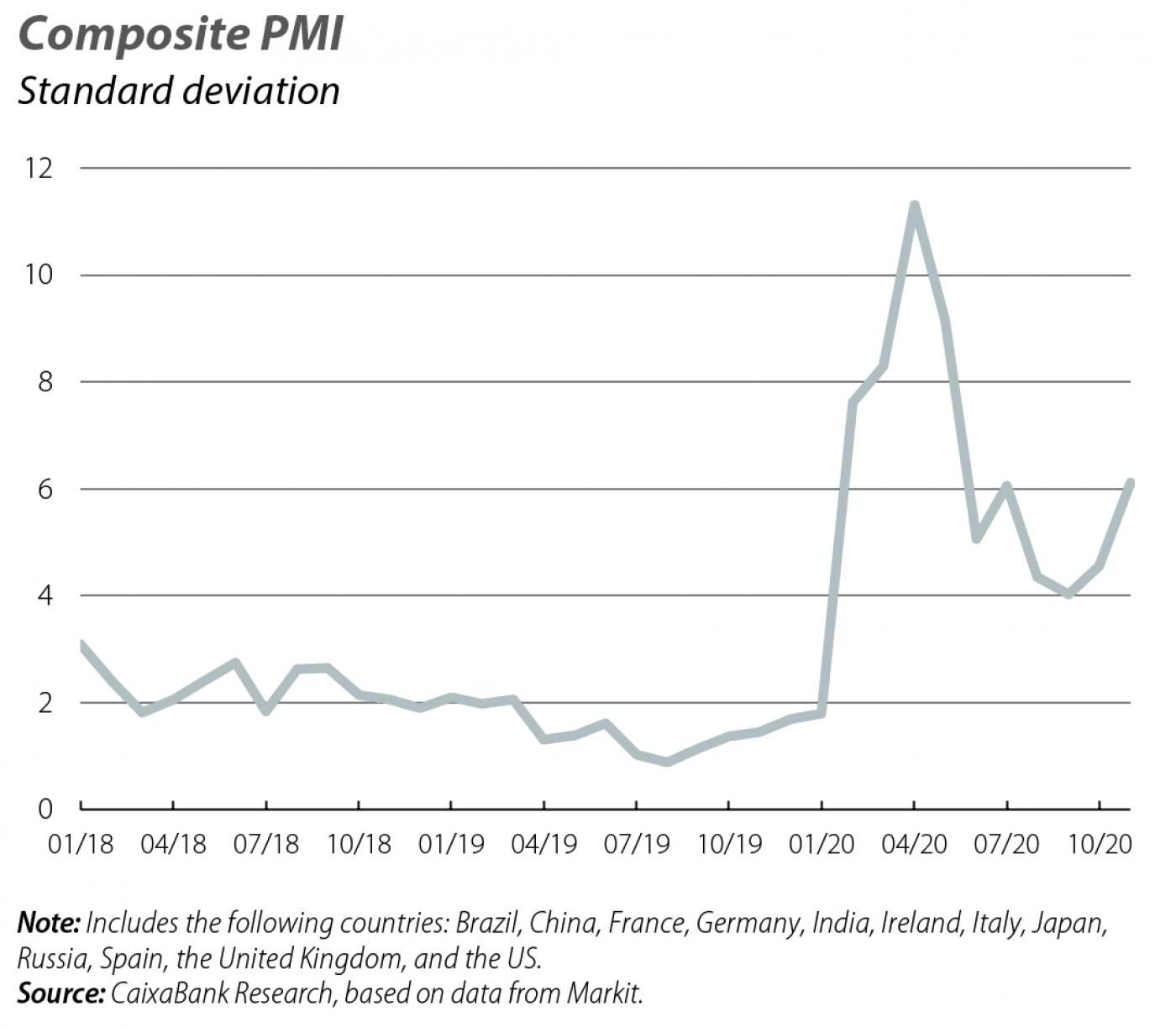 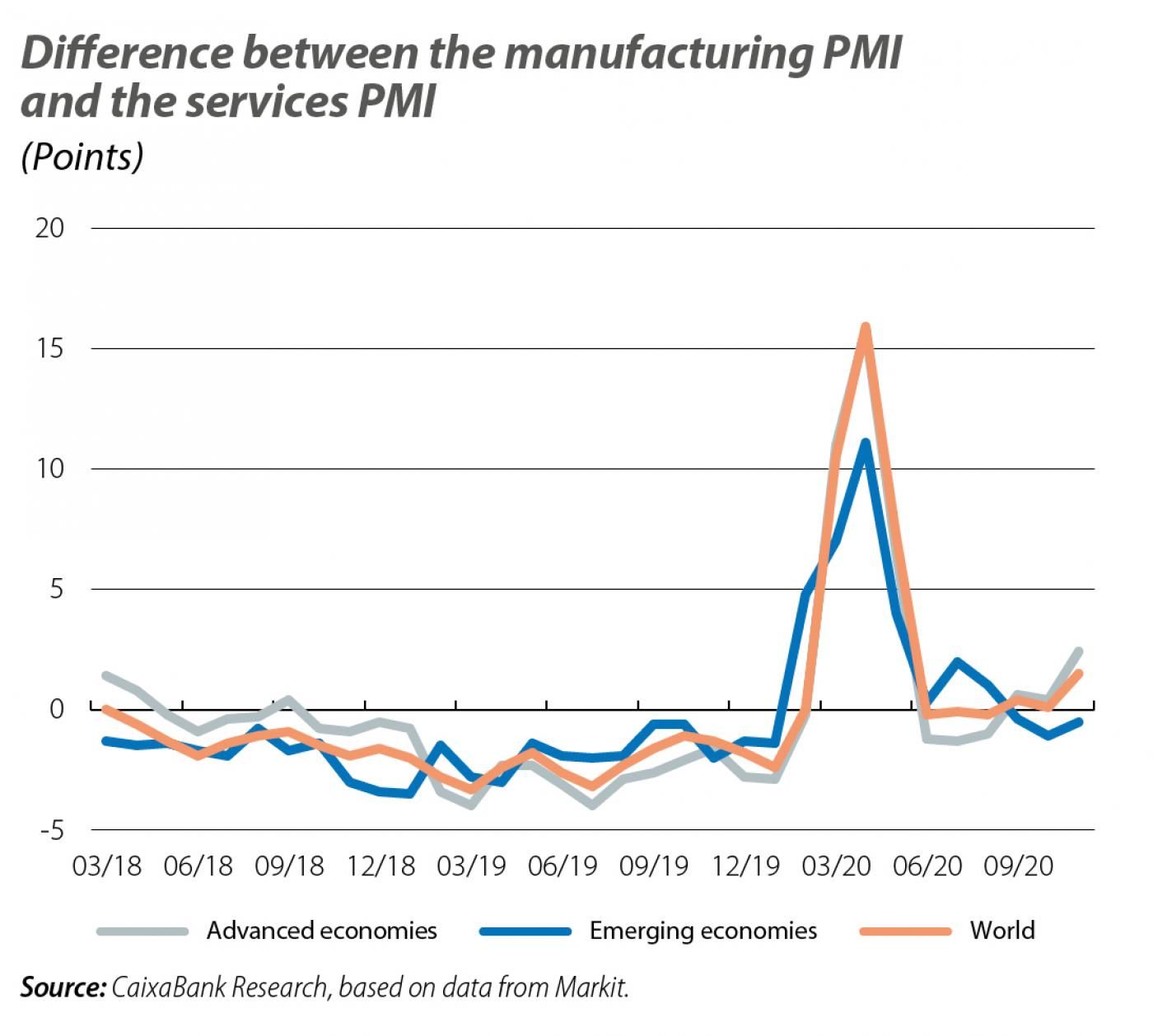 After being the first epicentre of the pandemic, China has exemplified the benefits of the approach that has come to be known as «go hard and early», involving highly-aggressive and rapid lockdowns and mass testing and quarantining at an early stage. Perhaps the best example, rather than the well-known case of Wuhan, has been the outbreak in the city of Qingdao, where faced with just a dozen cases last October, the entire population of 9 million people was tested in just 5 days. And requiring relatively limited support from economic policy: the Bank of Spain, for instance, estimates that China’s fiscal stimuli in 2020 have amounted to slightly less than half that of the Great Recession of 2008 (equivalent to 6% of GDP now; 13% in 2008). In short, in Q2 2020, after growing by almost 12% quarter-on-quarter, China’s GDP had already surpassed the pre-pandemic level, a milestone not achieved in any other major global economy. Emerging from the crisis, China has benefited from a strong recovery in the industry-export binomial. China has supplied the world, first with products linked to the fight against the pandemic, and then with other products on top, such as electronics, which other producing nations were unable to supply. As a result, in November Chinese exports were more than 20% higher than a year earlier. In short, China provides a glimpse of a pattern that we will see across many economies in 2021: the important role that industry can play in the short term (we have already commented on its improved overall tone) and the supporting role of external demand (although for this to be the case, in 2021 the recovery will have to be synchronised). 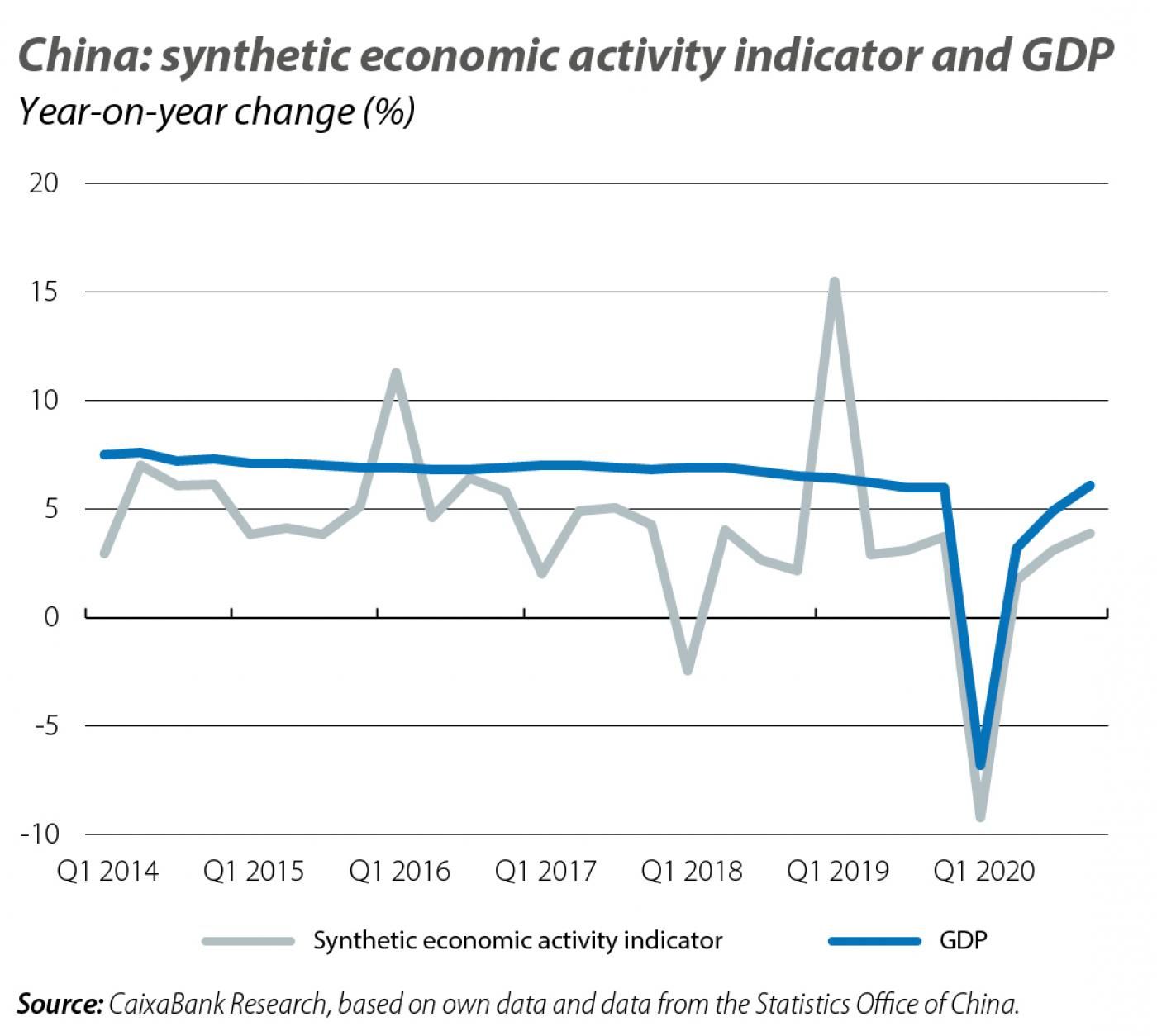 The other great global economy, that of the US, offers us other interesting lessons

Although there are significant differences between states, in the US overall the lockdowns and restrictions on activity can be considered less stringent than those imposed in other countries (particularly in Europe). For instance, whereas in countries such as Spain mobility (for leisure and shopping) ended the year at around –30% compared to prior to the shock, in the US the figures show a smaller decline of around –20%. This relatively laxer approach has been accompanied by a rather aggressive strategy of fiscal and monetary support. On monetary policy, after slashing rates to 0.00-0.25% and launching a wide battery of measures (most notably, significant asset purchases), in August the Fed anchored a dovish policy for a long period of time (expected to last beyond when the economy will consolidate its revival) by altering its strategic framework and indicating that it will temporarily tolerate inflation above 2% in the future. With these broad guidelines, in December the Fed reiterated its message of support (its asset purchase programme will remain in place at least until the end of 2021, as set out in the Financial Markets economic outlook article). A similar reading, involving a prolongation of the stimulus, can be made in the field of fiscal policy. At the end of December, a new fiscal package worth some 0.9 trillion dollars, equivalent to just over 4% of GDP, was approved. It will be the second largest in history, after the one adopted last March, which had a budget of some 1.8 trillion dollars. Among other measures, the latest package will include a stimulus payment of 600 dollars to a high proportion of citizens, with an additional 300 dollars per week going to those on unemployment benefits. Europe remains one of the regions hardest hit by the pandemic

The incidence of the second wave of COVID-19 has forced countries such as France and Germany to impose a second lockdown, and many countries continue to have restrictions on mobility and activity in place. However, the strategies applied in this second wave are more selective, and in general the incidence reflected in the economic activity indicators for Q4 is clearly lower than that of the spring. For instance, the composite purchasing managers’ index (PMI) for the euro area stood at 48.4 points on average in Q4 2020. Although this represents a step back from the 52.4 points of Q3 and the index has fallen below the 50-point threshold (which separates the contractionary and the expansionary territory), the level of economic activity reflected by this indicator has remained well above the 31.3 points registered in Q2 2020. 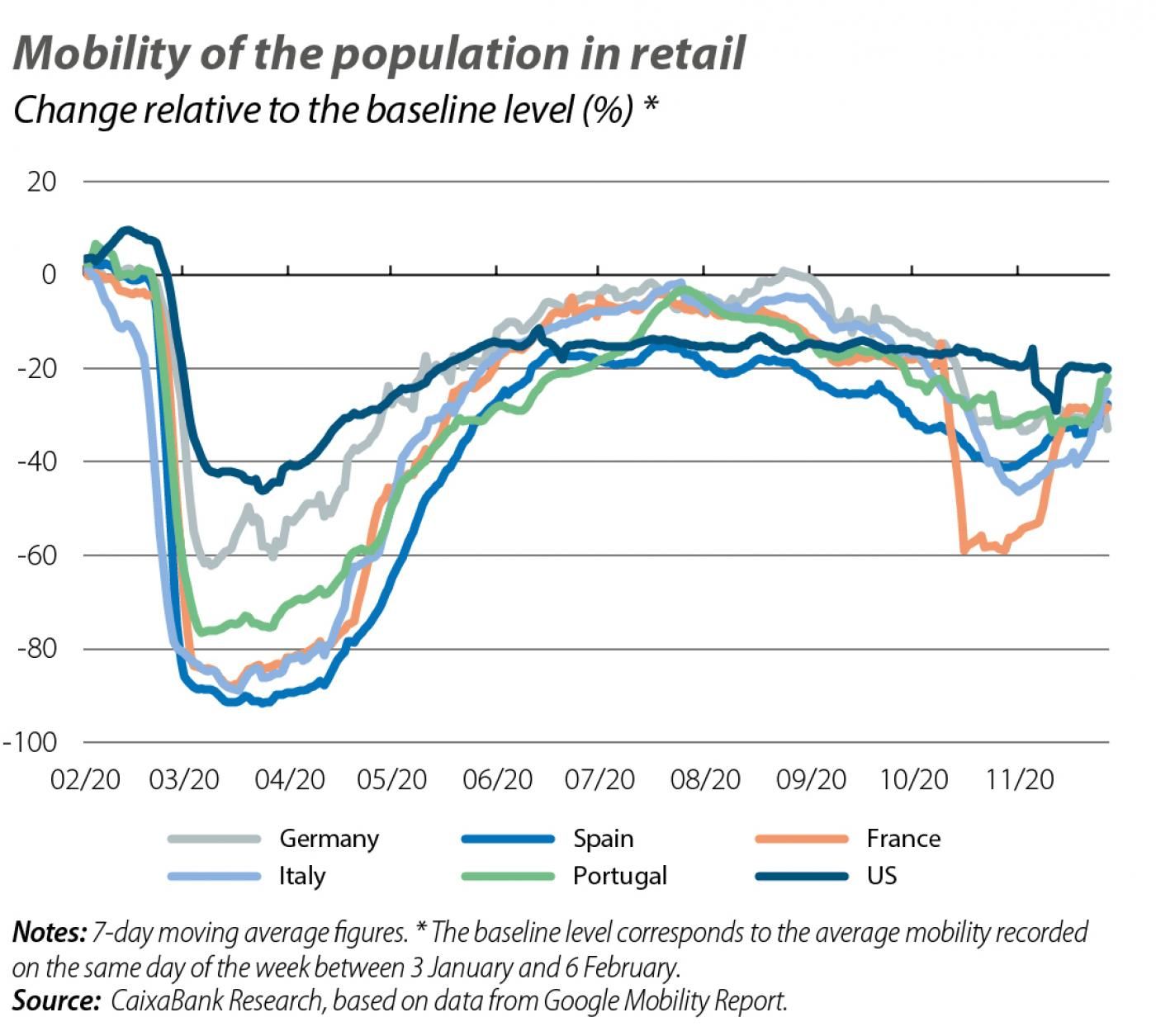 Which will help to avoid an erosion of Europe’s fragile recovery. On the one hand, at the fiscal level, the new EU budget was approved after overcoming the threat of veto by Hungary and Poland, paving the way for the disbursements of the Recovery Plan (the so-called NGEU) according to the envisaged timetable. Furthermore, Europe will have the accommodative financial environment that the ECB has prolonged for a long period of time (see the Financial Markets economic outlook article), following an initial action taken in the spring which, like that of the Fed, was rapid and aggressive. On the other hand, the EU and the United Kingdom reached a trade agreement just a week before the end of the Brexit transition period (the country’s departure from the EU had been made official at the start of 2020, but its withdrawal from the single market and the customs union was not effective until 1 January 2021). The agreement, which is basic, does not prevent an increase in barriers to trade in services (there is no financial passport or automatic recognition of licences or professional qualifications), but it does guarantee that there will be no tariffs or quotas in the trade of goods (although there will be regulatory and bureaucratic barriers). It also covers a wide range of areas (fishing, transportation, energy, security, EU programmes, etc.) and establishes a mechanism for resolving disputes. This latter aspect is key, since frictions may arise in the medium term that will need to be resolved as the legal and regulatory frameworks gradually diverge. The agreement will be applied provisionally from 1 January 2021, pending final approval by the European Parliament by 28 February 2021 (the British Parliament ratified it in a lightning session before the end of 2020). 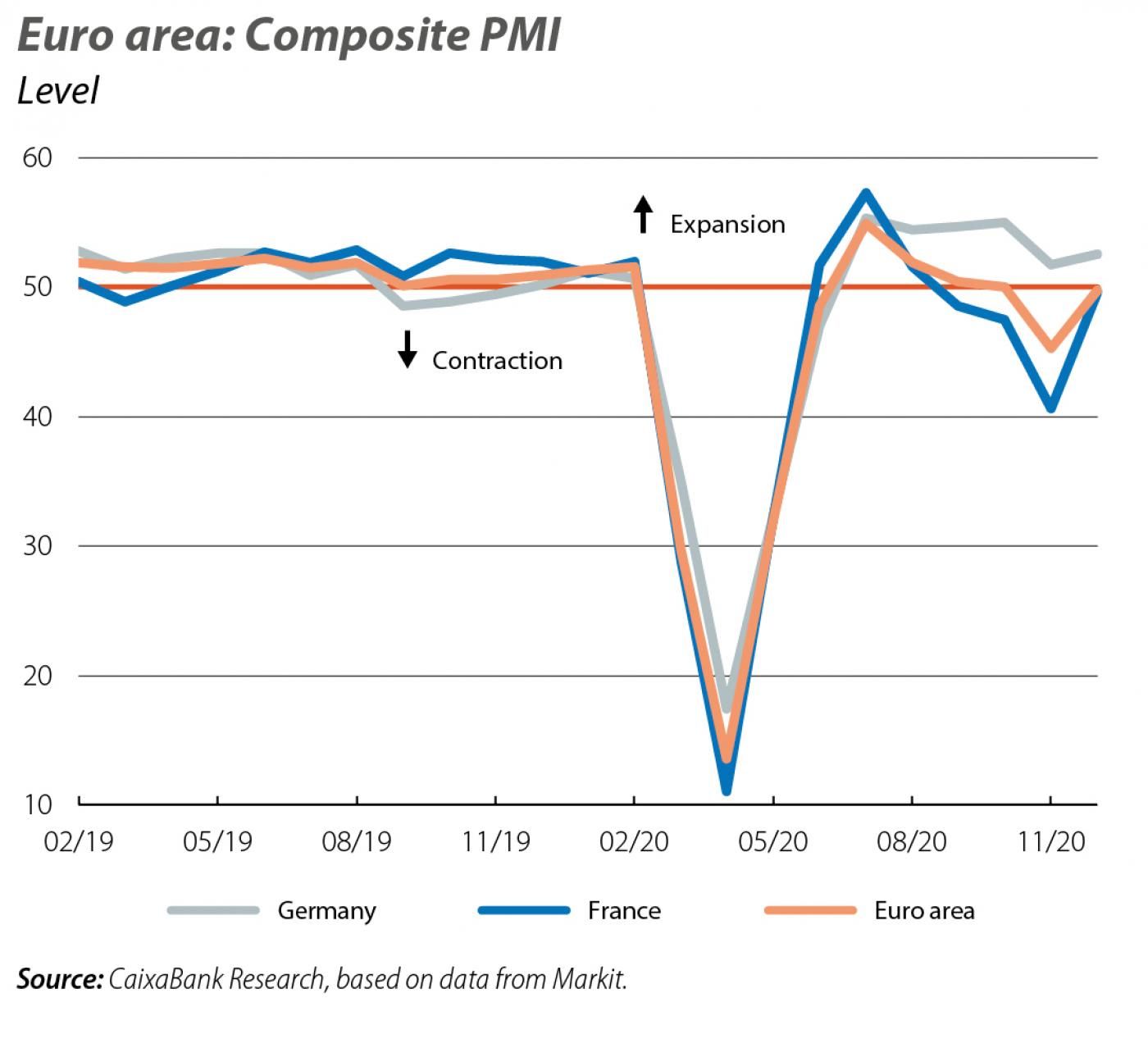