The pandemic caused a sharp drop in international trade and tourism in 2020, leading to a significant contraction in exports of goods and services. Nevertheless, the Spanish current account balance remained positive and ended the year with a surplus of 0.7% of GDP. 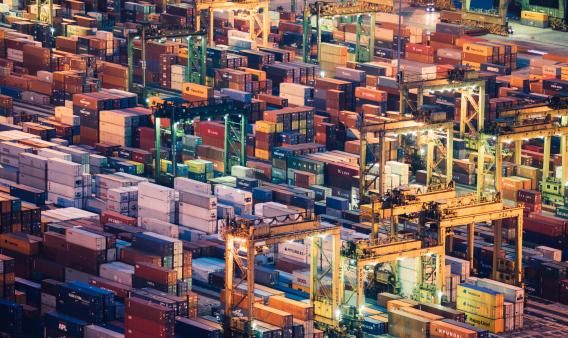 In 2020, both exports of goods and services as well as imports fell sharply, by 20.9% and 17.8% respectively, but there were disparate underlying trends.

On the one hand, the services sector ended the year with an erosion of its external balance of around 38 billion euros (around 3 pps of GDP). This fall almost entirely reflects the annus horribilis endured by tourism, the external surplus of which fell by some 37 billion euros (from 46 billion in 2019 to 9 billion in 2020). Nevertheless, not all was bad news: non-tourism services managed to maintain a positive (albeit somewhat lower) balance, also reflecting the growing consolidation of their international competitiveness over the past few years.1

On the other hand, the balance of goods behaved quite differently and offset part of the collapse in tourism services, while the energy balance managed to reduce its deficit by some 11 billion euros bringing it to levels not seen since 2004, mostly due to the fall in the price of oil. The balance of non-energy goods also made a significant contribution and improved its balance by 7.5 billion euros to end the year in surplus, reflecting a smaller contraction in exports than in the case of imports (-8.3%, or 22.7 billion euros, versus -10.9%, or 30.2 billion euros, respectively). 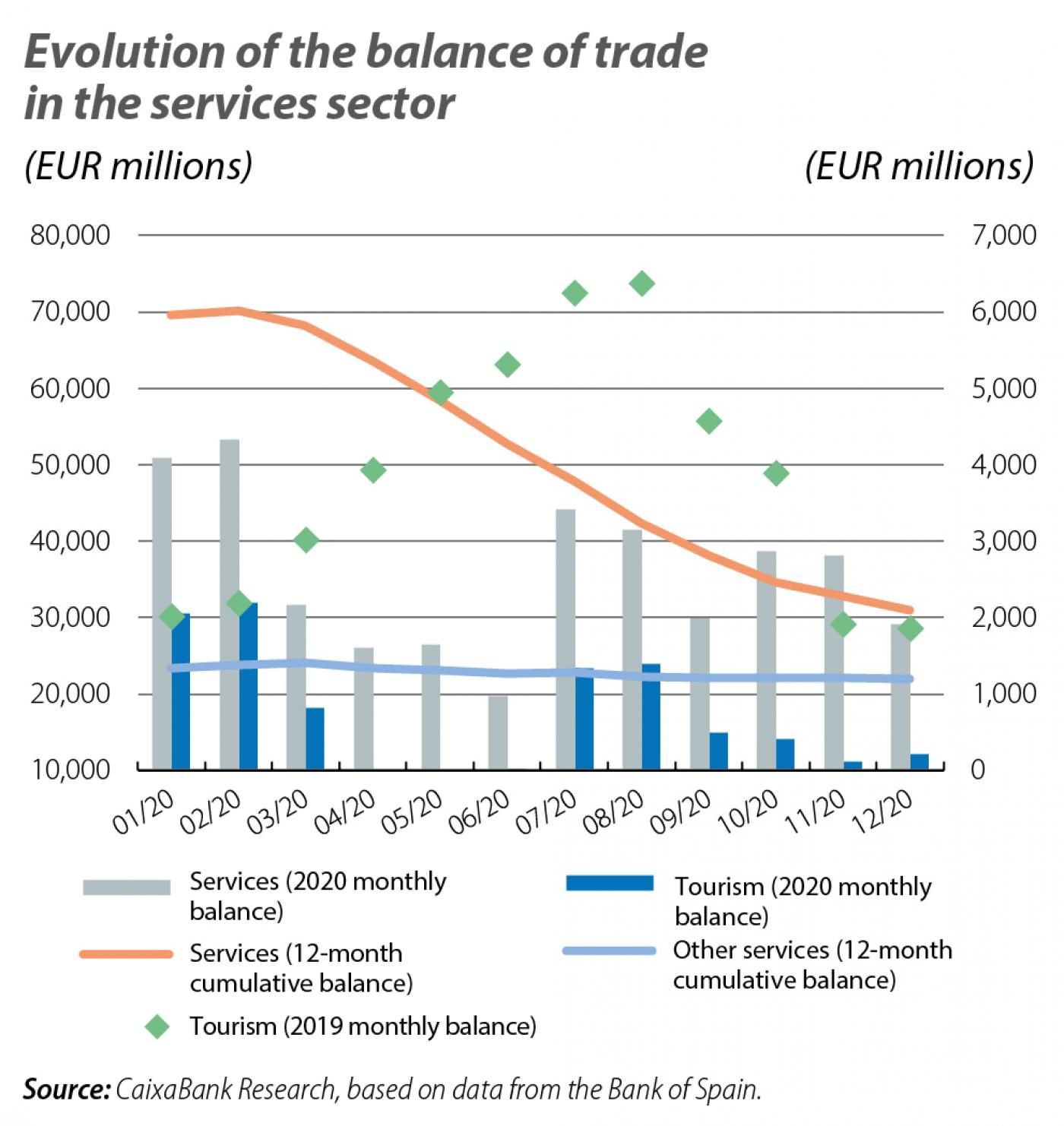 A tale of two sectors affected by the COVID-19 crisis

Within the balance of non-energy goods, the food and automotive sectors made an especially notable improvement. The former increased its trade surplus by some 4 billion euros and surpassed the 20-billion-euro threshold for the first time. This improvement has not only been the result of the fall in imports (–7.9%) – exports increased by 5.3% too, driven by factors in the wider economic environment and the sector’s improved competitiveness at the international level.2 On the other hand, although automotive sector exports fell by 10.2% in 2020 as a whole, this figure is highly driven by the collapse that occurred during the spring as a result of the strict lockdown imposed during the first wave (a contraction of almost 90% was registered in April).
In contrast, the sector experienced a strong recovery in exports beginning in June (in the second half as a whole, the sector’s exports managed to register a year-on-year growth of 7.2%). Meanwhile, weak domestic demand led to a sharp fall in the sector’s imports in 2020 as a whole (of 35.2% compared to 2019). The sector thus ended the year with a balance of over 15 billion euros (a figure not reached since 2016), representing an improvement of some 4 billion euros compared to 2019.

Overall, the loss of 37 billion euros in the tourism surplus was thus partially offset by the improvement in the energy balance, a certain degree of resistance in the exports of goods (especially in the case of food and cars), and a contraction in domestic demand and imports. For 2021, with a recovery in domestic demand and in the price of oil, our forecasts point to a deterioration in the energy balance of some 5 billion euros. In addition to maintaining the positive signals in the export sector, the capacity to revive tourism will be key. If our projections of an incomplete but notable revival are met, then the surplus in the balance of services would rebound by around 16 billion euros and the total current account balance could stand at around +1.5% of GDP, still some 10 billion euros below the pre-pandemic surpluses.

In physics, kinetic energy – that which a body of mass possesses because of its relative movement – is defined as the work required to accelerate that body up to a certain speed. In 2021, the recovery of the current account balance will follow a similar equation: the speed of its recovery will be determined by the rate of vaccine production and the success of the vaccination programmes in Spain and the EU. 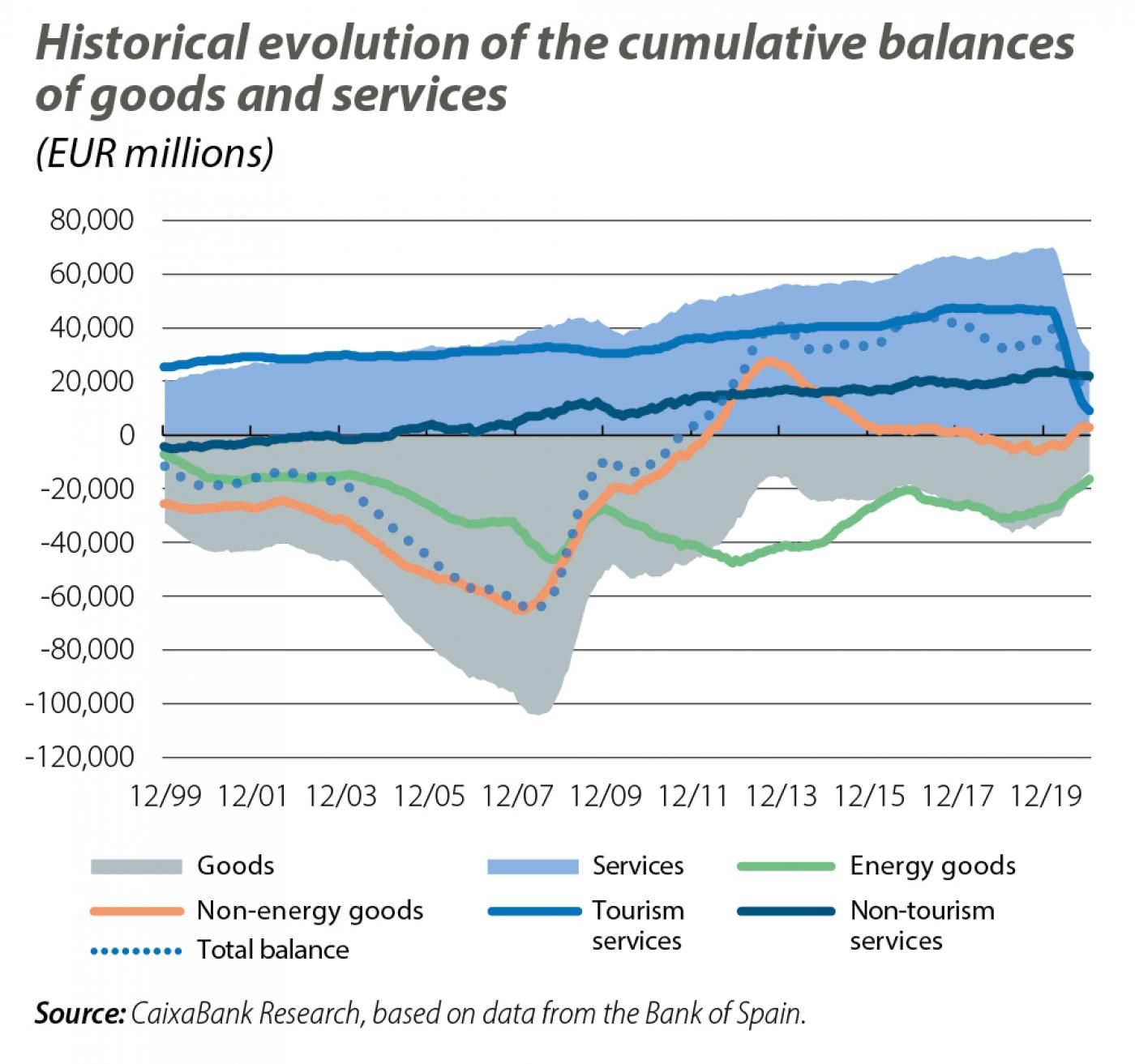