What can we expect from cryptocurrencies?

In 2009, the elusive Satoshi Nakamoto, the pseudonym used by one or several people to maintain their anonymity, published a paper in which he described how to create the equivalent of cash in a digital form, and launched the software that created Bitcoin, the first cryptocurrency.1 Since then, cryptocurrencies have proliferated and their market value has grown dramatically. In this article, we will take a detailed look at what cryptocurrencies are, what the technology that makes them possible consists of and what prospects they offer. As we shall see, although we are sceptical about the foundations that underpin the growth of cryptocurrencies, the technology that underlies them offers a wide range of alternative applications.

Let us start with a short overview of the evolution of the cryptocurrency market. As shown in the table, the market value of cryptocurrencies has undergone a sharp increase in the last two years. However, this euphoria dissipated, at least partially, following rumours in mid-January 2018 that the authorities in South Korea and China planned to introduce restrictions on their use. Also, while the market for cryptocurrencies is extremely volatile, it has not raised major concerns regarding its impact on macrofinancial stability. This is due to the fact that cryptocurrencies still represent a very small fraction of the world’s GDP. At their peak, they barely represented 1% of GDP, which contrasts, for example, with the market valuations of technology companies during the euphoria of the dot-com boom, which reached a value of approximately 30% of global GDP.2

It is necessary to understand what cryptocurrencies are in order to assess how the market has evolved over time. In simple terms, a cryptocurrency is a form of digital money, combined with a payment system. As digital money, cryptocurrencies offer nothing new: the digitised version of money has already been part of our lives for many years, and we use it on a regular basis in the form of electronic bank accounts and debit and credit cards. However, the payment system of cryptocurrencies does represent an innovation. For the first time, we can now exchange money digitally, relatively securely and anonymously, directly between buyer and seller without the transaction having to be processed in a centralised manner by an intermediary, such as a bank.3

This has been made possible thanks to blockchain technology. Before the blockchain, the direct digital exchange of money between users was not possible due to the risk of counterfeit. At the end of the day, an electronic account is nothing more than a computer file, and if there were nobody to check that this file had not been altered fraudulently, the value that appears in the account could be modified or falsified. The blockchain seeks to minimise this risk in two ways. Firstly, it creates a public record of all the transactions that are carried out in cryptocurrency. Any new transaction is added to the chain of previous transactions, hence the name blockchain, and becomes public as well. This allows any user who receives a payment to verify that the other user has the funds to make that payment. For example, if Xavier wanted to pay two bitcoins to Mary through the blockchain, it is possible to check that Xavier had received two bitcoins from Anna previously and, therefore, that he has sufficient funds to pay Mary. Secondly, it establishes a system through which the process of verifying transactions is performed in a decentralised manner and carries a cost.4 This mechanism makes it more difficult for fraudulent transactions to be entered.

As mentioned above, cryptocurrencies have managed to bring the benefits of cash to the digital world. Not only do they make it possible to make payments directly between buyer and seller, but the transactions can also be anonymous. This anonymity is due to the fact that, although the transaction ledger contained on the blockchain is public, the digital signatures used to execute the transactions are protected with encrypted codes that preserve users’ identity.

However, as fascinating as the technical details of cryptocurrencies may be, their future depends on their viability as a form of money. As explained in the article of this same Dossier «From barter to cryptocurrency: a brief history of exchange», economists believe that an item can be accepted as money if it can fulfil three basic functions: being a means of payment, a stable store of value and a unit of account. Let us assess cryptocurrencies according to each of these dimensions.

Firs of all, it seems unlikely that cryptocurrencies will become an effective means of payment. Trust is the main element that underpins any currency. Although the money we use today is a form of fiat currency (it has no intrinsic value), we feel comfortable using it because we know that other people will accept it as a means of exchange. This is the case largely because the currency is backed by a government which forces its citizens to accept it as a means of payment (the currency is legal tender). This is not the case for cryptocurrencies: no government supports their use and, given that they have no intrinsic value, their value as a means of payment therefore resides purely in the expectation that other people will accept it as such.

It is also not clear to what extent cryptocurrencies can become a good store of value. An example of this is the high volatility of their price (see chart). In a comparison with the euro, while in the last four months Bitcoin has lost about 60% of its value, the average annual fluctuation in the value of the euro over the past 15 years has been 1.6%. And Bitcoin is one of the most stable cryptocurrencies.

This volatility is largely due to the point we mentioned earlier: cryptocurrencies have value to the extent to which we expect others to assign it value, something which is highly volatile by its very nature. Furthermore, continuing with the previous comparison, traditional currencies have a stable value not only because governments back them, but because there is a central bank that adjusts their supply at any given time according to the economic conditions that prevail and, therefore, the demand that exists for them. This is vital, hence the key role that the central banks have acquired in developed economies. This is not the case, however, for the majority of cryptocurrencies, the supply of which is governed by predetermined rules that do not take into account the demand that exists for them.6

If that were not enough, cryptocurrencies involve certain added risks. Firstly, the nature of the blockchain means that transactions are not reversible. Therefore, if a transfer is made by mistake, there is no way to undo it. Also, cryptocurrencies can be subject to computer hacks. In fact, some of these hacks have managed to circumvent the system of user anonymity.

In short, despite the recent euphoria that cryptocurrencies have aroused, we are sceptical about their potential for growth, given the inherent risks they involve and their limited potential to replace traditional currencies. Nevertheless, our scepticism does not apply to the technology that underlies cryptocurrencies: the blockchain. This technology makes it possible to keep a decentralised, comprehensive and public record of any transaction. The technology is still young, and its potential applications beyond the field of cryptocurrencies are vast. We explore one of them in the article of this Dossier, «Digital money in the economy of the future: new possibilities, new challenges». We encourage you to stay on board and keep reading!

3. In practice, the current digital payment system does not just involve one intermediary, but up to four: the buyer’s bank, the seller’s bank, the company that owns the card and the regulator (usually the country’s central bank). Clearly, this system is far from anonymous.

4. In practice, the verification system is carried out using computers which must solve numerical algorithms derived from the field of cryptography. Thus, the cost of verifying the transactions is materialised through the electricity consumed by the computers. This cost is by no means trifling. As can be seen in the table, the verification system for Bitcoin is estimated to currently consume an amount of electricity equivalent to the annual electricity consumption of a country such as Switzerland.

6. For example, the system for Bitcoin establishes that 21 million units will be reached in 2040 and that new bitcoins will cease to be minted from that moment. 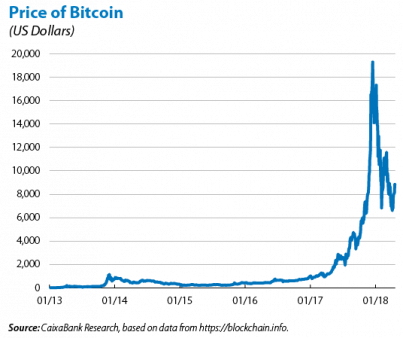