The COVID-19 pandemic has triggered a severe economic crisis and, as in previous recessions, there is a risk that inequalities will worsen. Traditionally, in economic recessions in Portugal, the labour market has endured significant job destruction. For instance, in the sovereign-debt crisis, GDP fell by an average of 2.2% and employment, by 3.3%. In contrast, in the current crisis the sensitivity of employment to the collapse of GDP has been much lower: a 7.6% drop in GDP versus a 2.0% drop in employment.1 In other words, for each percentage point of decline in economic activity, employment fell by 0.26 points in 2020 (i.e. around 13,000 jobs). This result is not only due to the particularities of this crisis, which originates in the health sphere rather than the economic one, but also due to a very different response from the authorities, especially through the labour market support measures and the temporary workforce reduction programmes that have been implemented.2

However, the less severe reaction from employment in the current crisis hides differences according to economic sector, age group, contract type, length of service, level of studies and type of profession. What happened to the most vulnerable groups? Did this crisis affect them more than the rest? 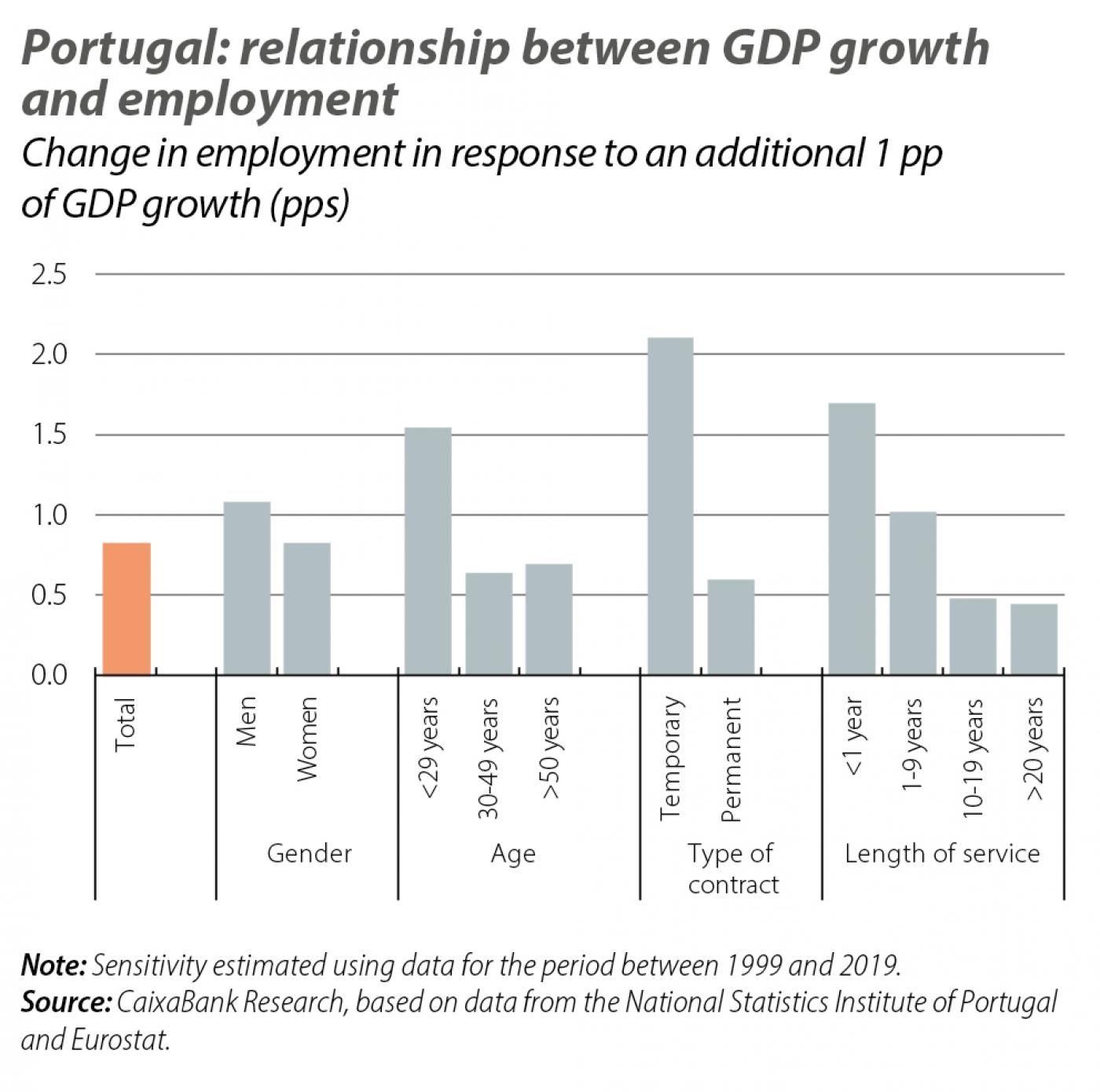 What has happened in this crisis? As shown in the second chart, in relative terms, the drop in employment was most marked among young people, men, those on temporary contracts and those with a shorter length of service.4 At the same time, employment fell for all levels of education except those who have completed higher education, no doubt partly because they work in professions with a greater potential for teleworking.5 In fact, if we analyse the evolution of employment by type of profession,6 we see that the only increase occurred in the group of specialists in intellectual and scientific activities.7 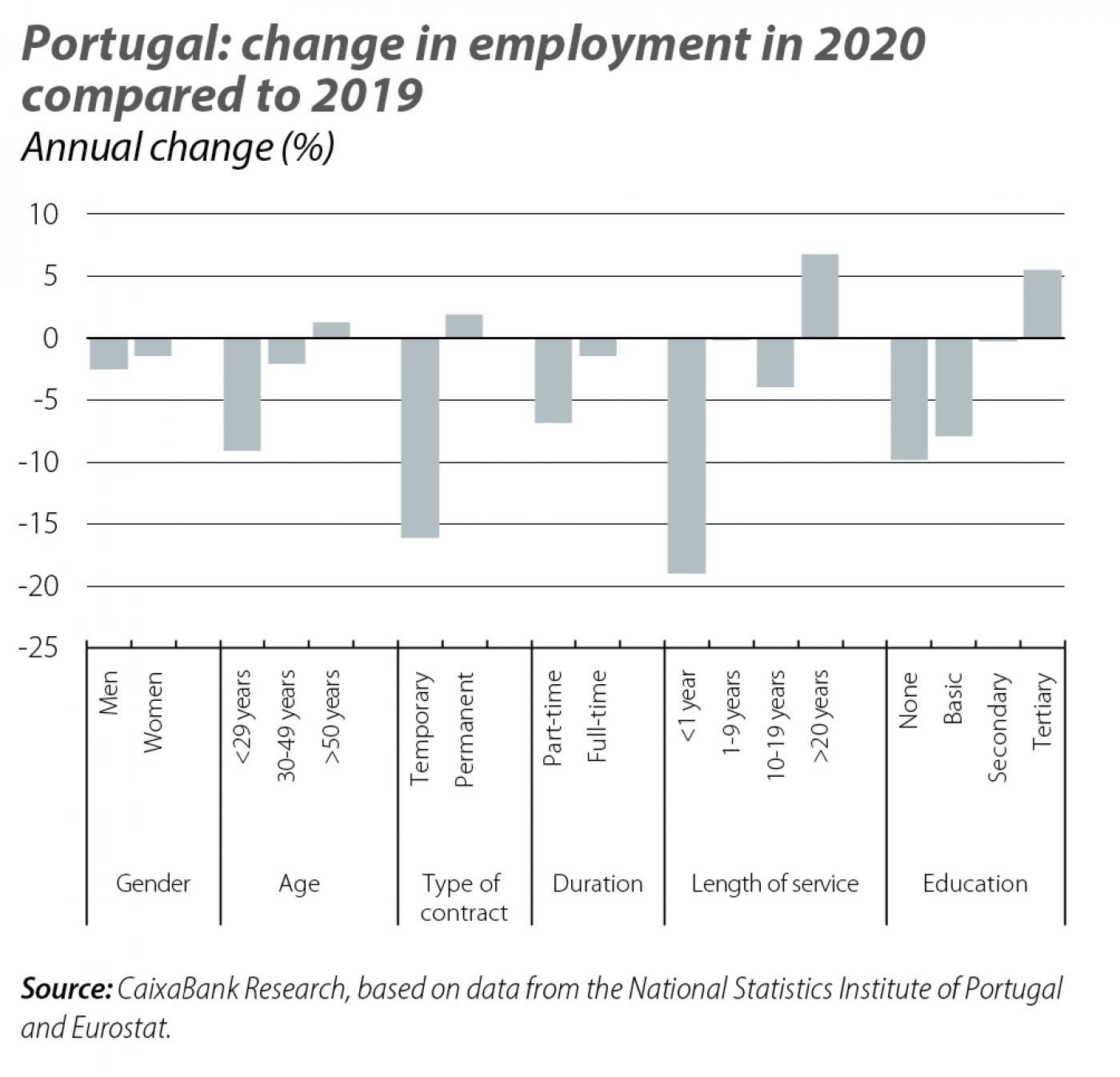 At the sector level, as one might expect, there has been a greater destruction of jobs in those sectors most affected by the pandemic and social distancing measures (retail, accommodation and catering, and administrative activities and support services). These are also the sectors with the highest predominance of low wages and low-skilled workers.8 On the other hand, there were sectors in which the opposite occurred, such as information and communication activities and consulting, scientific, technical and similar activities, where there is a greater capacity to telework and where the impact of the pandemic has been less pronounced.

These data indicate that the COVID-19 crisis has had an uneven impact on the labour market. However, the impact of the pandemic could also have been worse for the most affected groups, had it not been for the implementation of employment support measures. As can be seen in the third chart, if the historical sensitivity of employment to economic activity had persisted, we could have witnessed a fall in employment of more than 6% (i.e. the destruction of more than 307,000 jobs, instead of the 99,000 observed) and the fall in youth employment could have reached 12%. On the other hand, the reduction in employment in the case of temporary contracts was in line with the historical relationship, and the drop in employment of people with a shorter length of service was greater than the historical relationship between employment and GDP suggested – a sign that this group has been particularly affected by the current crisis. 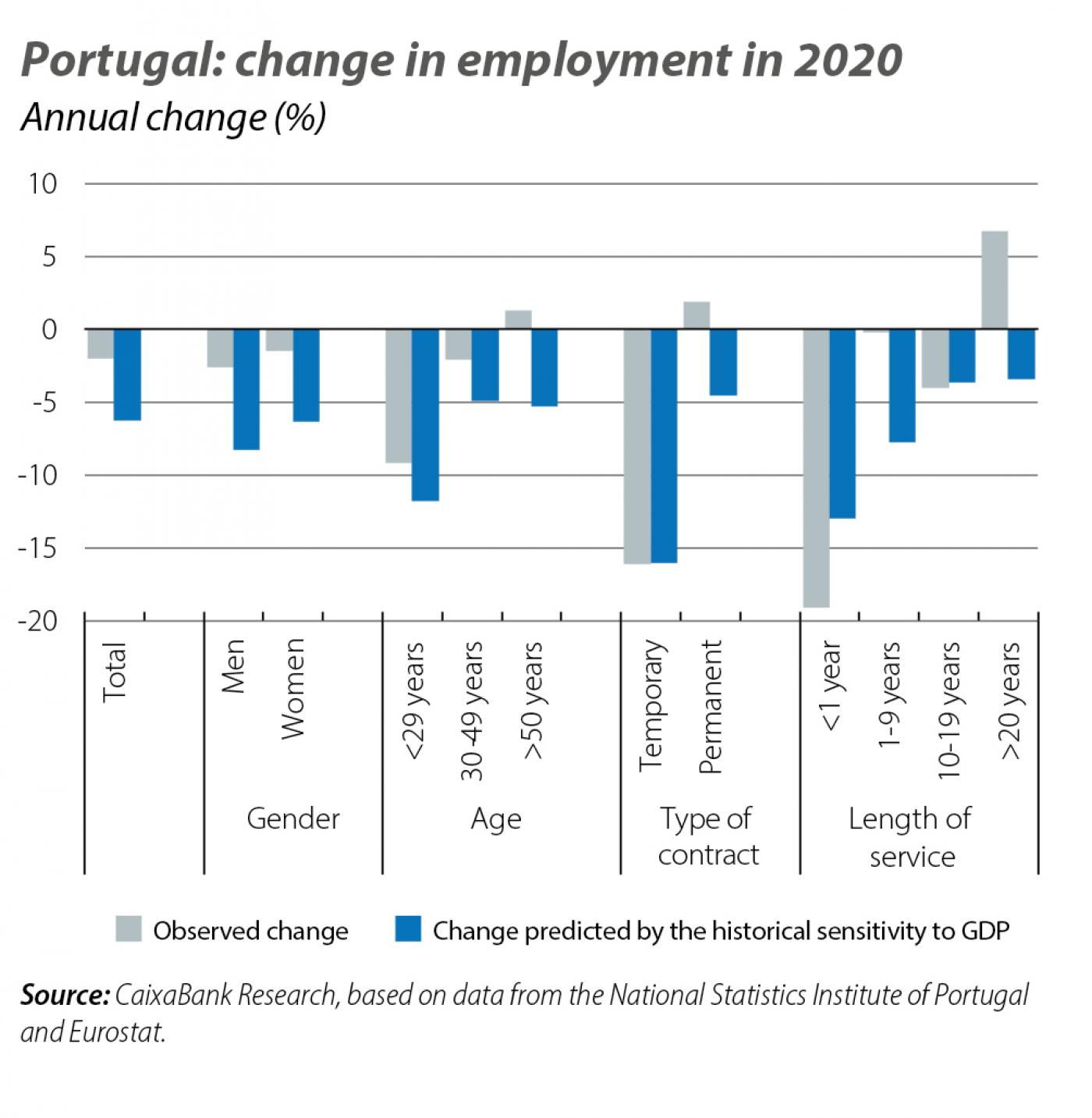 In a recent article, we concluded that economic and social policy measures helped to mitigate the impact of the pandemic on households’ disposable income.9 The message in this article is similar: while the effects of the pandemic have been uneven and the most vulnerable have been the hardest hit, the impact on employment was generally less severe than the fall in economic activity would have suggested. The protection systems currently in place, which are more favourable and ambitious, have helped to limit the deterioration in inequality. However, we cannot rule out the possibility that the COVID-19 crisis, like others before it, may end up leading to worse levels of poverty and income inequality in Portugal. Avoiding this will be one of the major challenges of the recovery.