The economy keeps growing at a good pace. The Spanish economy performed well in the first three months of the year and there is no sign of the expected slowdown – as yet. In general, economic activity indicators for January and February were more positive than for the previous quarter. Private consumption and particularly investment in capital goods were very strong and were probably the drivers of domestic demand in Q1 2017. On the supply side, strong business sentiment indicators have also been accompanied by good business figures in industry and services at the beginning of the year. The CaixaBank Research GDP forecast model estimates 0.8% quarter-on-quarter growth in Q1, slightly higher than the rate posted in Q4 2016 (0.7% quarter- on-quarter).

Growth prospects are improving. Such positive indicators for economic activity and confidence, together with the likelihood that oil prices will not rise as fast as previously thought, have led us to improve our GDP growth forecast by 0.2 pp, both for 2017 and 2018, up to 2.8% and 2.4%, respectively. Forecasts by other analysts, such as the Funcas think tank and Consensus Economics, as well as those of institutions such as the OECD, IMF and Bank of Spain, have all been upgraded recently. This will therefore be the third consecutive year that Spain outperforms the growth forecasts made a year before, assuming there are no shocks that interrupt the economy’s expansion. By way of example, in MR04/2016 CaixaBank Research predicted 2.1% growth for 2017, 0.7 pp lower than the current forecast. But this scenario still faces strong risks, especially due to Europe’s high political uncertainty given its full electoral calendar and the start of Brexit negotiations.

Higher GDP growth is being passed on to the labour market. In line with these good economic activity figures, data for the labour market have also been very positive. The number of registered workers affiliated to Social Security rose by 46,079 people in February, seasonally adjusted, a similar figure to two years ago. The job creation rate therefore speeded up to 3.4% year-on-year. It is also significant that this improvement was widespread across most economic sectors. Registered unemployment fell by 32,711 people, also seasonally adjusted. The rate of decline in registered unemployment therefore increased by 0.3 pp to –9.7% year-on-year. This good performance by the labour market in the first two months of the year, as well as the improved GDP growth prospects, have also led us to raise our growth forecasts for employment in 2017 to 2.2%, representing 400,000 additional jobs on average.

Wage rises are still moderate. This strong growth in employment is occurring while wage rises are still moderate, namely 1.2% on average in the collective agreements signed in February. According to the quarterly labour cost survey, wage costs actually decreased by 0.8% year-on-year in Q4 2016, falling to EUR 2,650 per worker and month. But the trend differs across sectors and particularly in the public sector, where the difference is remarkable. In this sector, the extra payment for civil servants was withdrawn in December 2012 but then gradually reinstated. With 2009 as our benchmark, labour costs in public administration and defence remained below the total for all economic sectors but this trend reversed 2015 and 2016 when 50% of the withdrawn extra payment was repaid in each of these two years.

Prices will gradually reflect the stronger economy. Inflation will gradually move towards the ECB’s target of 2% as the expansion firmly takes root in Spain’s economy. At present, the core CPI, which excludes energy products and fresh food, posted a slight increase of 1.0% year-on-year in February, still far from this target. In clear contrast, headline inflation dipped to 2.3% in March after reaching 3.0% in both January and February. But the upswing in inflation at the start of the year was temporary and due to price changes in electricity and fuels. Over the coming months, oil prices will continue to rise, reaching USD 58.6 per barrel by December 2017. This is lower than we had previously predicted due to the sustained growth in unconventional oil production in the US. The extra supply limits the effect of the OPEC agreement last November to cut production (see the Financial Markets section in this Monthly Report). We have therefore downgraded our forecast for average annual inflation to 2.2%. In short, headline inflation will fall as the effect of rising energy prices dwindles, while core inflation will move in the opposite direction, growing slightly due to dynamic private consumption.

The more moderate price increase in oil will support the current account. In 2016, the current account balance was EUR 21,786 million (2.0% of GDP), larger than the EUR 14,725 million achieved in 2015 thanks to the smaller income deficit and especially the reduction in the goods deficit. The improved energy account thanks to lower oil prices also played a crucial role: energy savings totalled EUR 6,882 million, equivalent to 0.7% of GDP. In 2017, rising oil prices will push up the energy deficit to EUR 26,500 million (2.3% of GDP). Oil prices will therefore no longer act as a support. Consequently, to achieve the planned current account surplus of 1.8% of GDP, it will be vital for exports of goods and services to continue performing as well as they have over the past few years. For the time being, January’s customs figures confirm that exports of goods are still growing at a good rate (2.8% year-on-year, cumulative over 12 months). International tourist arrivals are also improving on their record figures from 2016, with 11.9% year-on-year growth in February.

The healthy economic context helped to achieve the public deficit target in 2016. Spain ended 2016 with a smaller public deficit than the target agreed with Brussels (4.6% of GDP). The deficit was 4.3% of GDP if we exclude bank restructuring costs, which total 0.2 pp. The fact that economic growth in 2016 outperformed the forecasts used when the budgets were initially approved has undoubtedly been a huge advantage. In fact, the strong economic growth in 2016 would have reduced the public deficit by an additional 1 pp if fiscal policy had been neutral. We can therefore consider last year’s fiscal policy was expansionary. With a view to 2017, the better starting point thanks to a more favourable end to 2016 means that the adjustment required this year to achieve the deficit target of 3.1% of GDP will be less than initially planned. The better economic outlook in 2017 will also help to achieve the target. State budget execution up to February places the deficit at –0.9% of GDP, 0.3 pp below the figure of February 2016.

The improved economic cycle is also boosting credit. Better economic activity and low interest rates thanks to the ECB’s expansionary monetary policy are helping credit to start flowing again. In February, new loans granted to households for consumption and housing continued to increase very sharply (up by 18% and 21% year-on-year, cumulative for the year, respectively). More new loans are also being granted to SMEs (7% year-on-year). But in spite of these improvements in loans, in February the outstanding balance of resident private sector credit contracted by 3.0% year-on-year as this sector is still deleveraging. A breakdown of credit by segment for Q4 2016 shows a disparate trend depending on the reason for the loan. Developer loans speeded up their decline to 10.6% year-on-year while loans to other firms moderated their decline. This is a very positive sign that credit for productive activities is gradually recovering. 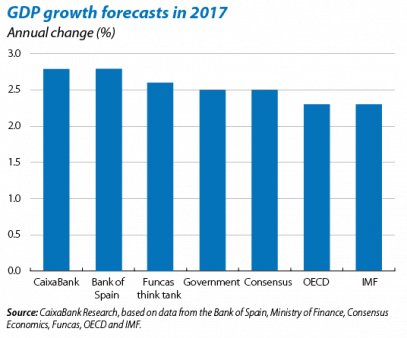 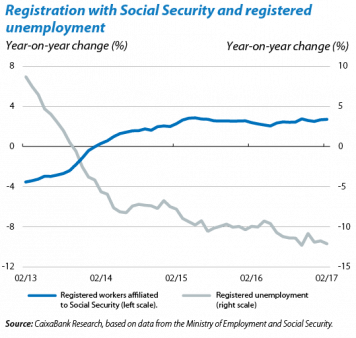 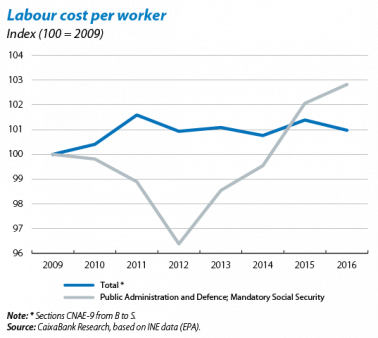 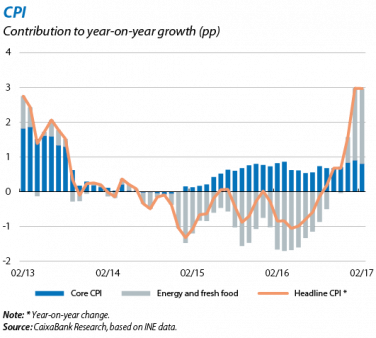 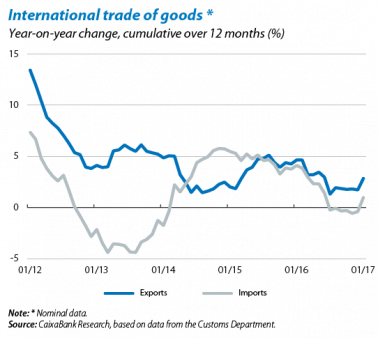