During the economic boom before the crisis, Spain multiplied its current account deficit by four, from 25 billion euros (4% of GDP) in the year 2000 to 105 billion (10% of GDP) in 2007, the world's second largest current account deficit after the United States. Then the crisis came and brought with it an abrupt, substantial correction of this deficit, pushing it back down to 3.5% of GDP (38 billion euros) by 2011. Undoubtedly, this correction makes a significant contribution to the Spanish economy's cherished external sustainability but will it be maintained or will we return to the previous trend once growth picks up again? Above all else, in order to answer this question we need to know what has brought about this correction and this is precisely the aim of this box.

In this respect, the graph below is revealing in itself: if we break down the current account balance into its different components, we can readily see that the adjustment in the external balance between 2007-2011 was particularly due to a sharp drop in the balance of trade in goods deficit and, to a lesser extent, to an increase in the positive balance in services. The current transfers and income balances also helped but to a much smaller extent and, in fact, the latter has deteriorated again due to the continued financial tensions in the euro area and their repercussions on the cost of financing Spain's debt.

Entering into more detail, the improvement in the trade balance of goods and services, which went from a deficit of 6.5% of GDP to one of 3.5% of GDP, was essentially due to the improved trend in the trade in goods: out of the 6 percentage points corrected, 5 correspond to the adjustment in the goods deficit and 1 percentage point to
the improvement in the services surplus. Given this situation, the question arises as to whether the adjustment
in the goods trade deficit reflects a better performance by exports or a sharp drop in imports, in line with the trend in domestic spending.

In fact, the dive taken by imports in 2008 and 2009 and their moderate recovery since then have made a significant contribution to this improvement. In particular, total imports fell by almost 20 billion euros between 2007 and 2011, with capital goods, consumer durables, the automobile industry and that of semi-manufactured non-chemical products being the items shrinking the most. This undoubtedly reflects the weakness in spending by Spanish households and firms, undergoing a deleveraging process that is reducing their expenditure on investment and durables, as well as the lower activity in construction, the main destination for semi-manufactured non-chemical imports, and also the collapse in residential investment, a sector with a high import content and which went from representing 12.4% of GDP in 2007 to just 6.9% in 2011. Lower spending on imports has also been due, in part, to the gradual recovery in competitiveness of the domestic market: import penetration(1) has gone from 26.5% in 2007 to just over 23% in 2011.

The decline in goods imports would have been even greater if oil prices hadn't risen sharply during the period analysed (from 72 dollars per Brent barrel in 2007 to 108 in 2011). This explains why energy imports went from almost 42 billion in 2007 (15% of all imports) to 56 billion in 2011 (22% of the total), making the energy deficit shoot up to 3.8% of GDP in spite of the slower pace of domestic activity (see the graph above). In this respect, the recent fall in oil prices is likely to correct this trend in the short term, particularly given the double-dip recession in Spain although, in the medium term, it is vital for industry to become less energy-intensive.

And although the decline in imports (of goods) has made a significant contribution to correcting the trade deficit, the good performance by exports has also contributed as much, or more. In fact, the trend in exports of Spanish goods has been admirable since the beginning of the last decade. During the boom, Spanish goods managed to keep their worldwide share relatively stable in spite of facing sustained losses in price competitiveness and the overwhelming appearance of emerging economies in world trade (see the box «The external sector: driving the recovery» and «Gains in competitiveness to restart the external engine») and, once the crisis erupted, although they were not immune to the collapse of world trade in 2008-2009, Spanish exports, together with those of Germany, were the first to recover from this slump.

This strength has been boosted by an export sector that is competitive not only in price terms, by the gradual recovery in external competitiveness (see the box «Gains in competitiveness to restart the external engine»), as well as a conscious effort to diversify towards more dynamic markets with great economic potential. In spite of the still broad export bias towards the euro area, the destination for 53% of all goods exports in 2011, its importance has waned in favour of, for example, China, India and Russia. This, together with the drop in imports and the correction in competitiveness terms is largely the reason for the change in direction of the trade balance with the euro area and also with the EU-27: while, in 2007, bilateral deficits were recorded with both zones of 3.7 billion and 3.8 billion respectively, in 2011 both achieved surpluses, of 1.6 billion with the euro area and 4.1 with the EU-27.

Leaving the balance of goods to one side, it should be noted that the increase in the trade surplus in services, which went from 23 billion euros in 2007 to 34 billion in 2011, has also helped to improve the current account balance, albeit to a lesser extent. In this case, imports have fallen very slightly while exports, once again with the exception of 2009, have steadily improved. By sector, although tourism services continue to be the main item within this balance, the balance of non-tourism services has also improved considerably. This is a very positive figure as business services have great growth potential, both in terms of employment and also wealth.

Lastly, the income balance and the current transfers balance have also made their own small contribution to the correction of the current account deficit but no more than this (5 billion euros between 2007 and 2011). With regard to the income balance, basically interest rates and dividends, its adjustment has been hindered by the sovereign debt crisis in Europe: the improvement that would have resulted from low official interest rates has been eroded by the rise in Spain's risk premium. Moreover, given the persistence of tensions, this balance is likely to continue to deteriorate in the short term. For its part the transfer balance, which includes funds sent by emigrants, donations and transfers from the European Union, has almost remained the same and the small correction observed can be attributed to a drop in payments related to the reduction in economic activity, from a deficit of 0.3% of GDP in 2007 to a little less than 0.15% of GDP in 2011.

In short, the recent correction in the current account deficit can be mainly put down to the better performance by the balance of trade in goods and in services. In order to maintain this trend once economic activity picks up, the correction achieved, both in terms of imports and exports, will have to be based on gains in competiveness, as well as requiring greater commitment to diversifying exports towards more dynamic markets and progressing towards industries that have greater added value, a lower import content and are less energy-intensive.

(1) Measured as the ratio of imports to expenditure on private consumption, public consumption, investment and exports, as a percentage.

This box was prepared by Claudia Canals 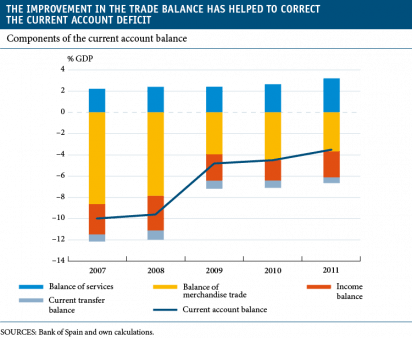 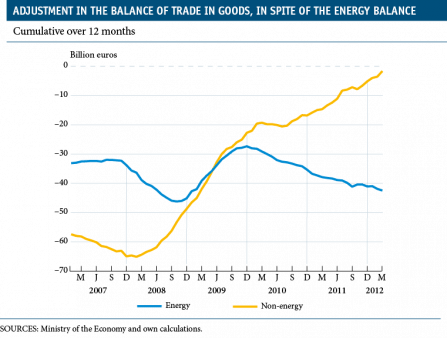