Benefits and risks of the new monetary policy instruments

The severity of the recent financial crisis has highlighted the limitations of using the very short-term interest rate as the only instrument of monetary policy. In fact, this interest rate has reached its zero lower bound in the United States and other developed countries, so it's not possible to provide more stimulus via this instrument. Given this situation, it has been necessary to use a wide range of unconventional instruments, of note being the asset purchase programmes of the central bank, also called «Quantitative Easing» (QE),(1) which directly expand the monetary base.

The experience of central banks with this kind of unconventional monetary policy instrument is rather limited, with the notable exception of the Bank of Japan. But almost 4 years have passed since the Federal Reserve responded decisively to the financial crisis by starting the first large-scale asset purchase programme (LSAP1) in November 2008. The table below details the chronological sequence as well as the extent and the assets purchased in the successive programmes carried out.(2) Given the recent announcement on 13 September of another round without any explicit time limit (LSAP3), we should ask ourselves the following question: how effective are these policies? And, even more importantly: what risks might they involve for the economy in the medium and long-term?

To be able to evaluate the effectiveness of large-scale financial asset purchase programmes, first we need to define which goals are being pursued. In reality, the ultimate objectives are no different to when standard monetary policy instruments are used. The aim is to relax financial conditions in order to stimulate aggregate demand and achieve economic growth close to its potential, ultimately arriving at full employment within a situation of price stability. Consequently, the effectiveness of these programmes must be evaluated, primarily, by their capacity to improve access to financing for firms and households and, secondly, by their contribution to economic growth. However, there are different channels that can be used to transmit monetary policy. With short-term interest rates practically at zero, asset purchase programmes aim to affect medium and long-term interest rates, flattening out the interest rate curve.

Several studies have analyzed the impact of asset purchases on interest rates. Empirically, it's no easy task to distinguish between monetary policy effects and the effects of other relevant economic factors, so different methodologies have been used in an attempt to isolate the consequences of these programmes. According to these studies, 10-year government bond interest rates fell between 40 and 100 basis points during the first asset purchase programme (LSAP1) and continued to fall, albeit to a lesser extent, namely between 15 and 45 additional basis points, during the second programme (LSAP2). The cumulative effect of these two actions, together with the maturity extension program (MEP),(3) is between 80 and 120 basis points. Similar effects have been estimated for mortgage-backed securities (MBS), an action used to stimulate the housing market. However, given the extent of the purchases of public debt and MBS through these programmes, which have exceeded 20% and the 25% of the balance in circulation respectively, it's not surprising that their price has been affected. Undoubtedly, more categorical proof of their effectiveness needs to be based on an analysis of the interest rates of assets that have not been directly bought. The studies available in this field are not as conclusive, as it is more difficult to determine what the interest rates would be of those different assets unaffected by monetary policy intervention. In any case, available evidence seems to indicate that there has been a fall in interest rates both for retail mortgages and corporate bonds (see the graph below), suggesting that these measures have managed to reduced financing costs for households and firms.

These policies might have prevented a relapse for activity. In fact, the Federal Reserve estimates that its asset purchase programmes may have increased GDP by almost 3 percentage points and increased private employment by more than 2 million jobs. However, what is true is that the economy is still very depressed. The considerable expansion of the monetary base and low interest rates appear to have not been effective in making credit flow to the real economy. Industrial capacity utilization continues far below its potential and unemployment is still very high. In fact, some economists, such as Professor Rajan from Chicago University, argue that we have probably used up the resource of credit conditions with low interest rates to stimulate growth. While the different economic agents (households, firms and financial institutions) are immersed in a process of adjusting their balance sheets, we must accept that the economy will grow at a slower rate for a prolonged period of time. However, other economists, such as Professor Michael Woodford from the University of Columbia, argue that the monetary policy instruments used are only effective when a more aggressive communication strategy is employed, including statements on forward guidance as well as current decisions. Communication is crucial to indicate that short-term interest rates will remain low in the future. This modifies the expectations of firms and households which, when they expect low interest rates for a sufficiently long period of time, tend to bring forward their decisions to consume and invest.

However, there have been an increasing number of warnings regarding the potential risks involved in these policies in the long term. Firstly, expanding the monetary base on a large scale could lead to inflationary risks. Although it should be noted that the Federal Reserve has designed exit strategies to remove excessive liquidity from the markets, one possible scenario is the disanchoring of long-term inflation expectations that might make it difficult for the central bank to maintain price stability. Moreover, the Federal Reserve is committed to maintaining an expansionary monetary policy until the labour market has substantially improved. Professor Martin Feldstein from Harvard University warns that this strong commitment to stabilizing employment could restrict its capacity to control inflation. The argument is that, with long-term unemployment historically high, inflation pressures are likely to be generated once the economy starts to recover if the labour market fails to improve. Should this happen, the Federal Reserve could come under strong pressure against not raising interest rates.

The critics that attract the largest number of opponents are probably those warning of the distortion to financial markets caused by mass purchases of financial assets, which could lead to the incorrect assignment of resources with destabilizing consequences in the long term. With interest rates falling to almost zero for risk-free short-term assets, investors have to rebalance their portfolios towards riskier assets in order to achieve the same yield on their investments. In fact, this is the mechanism via which asset purchase programmes necessarily affect the price of the rest of the financial assets. However, institutions such as the Bank for International Settlements and renowned economists such as Professor John Taylor from Stanford University warn that taking on too much risk could once again create bubbles in some assets and jeopardize financial stability.

In summary, the economy has yet to secure a firm foothold after more than 4 years of expansionary monetary policy. The daring actions taken by the Federal Reserve at the worst moments in the financial crisis have probably prevented the worst scenarios that could be envisaged. However, taking monetary policy to the limit of its function might entail high risks in terms of price stability and financial stability that are difficult to contain. In this respect, it is important to stress the role that must be played by other economic policy instruments to generate strong growth that is sustainable and balanced in the long term.

(1) Officially called the «Large Scale Asset Purchase» programme (LSAP). The Federal Reserve finances the purchase of assets by creating reserves in the accounts held by commercial banks with the central bank. This means that the Federal Reserve's balance sheet increases in size by the same amount as the assets purchased.

(2) It should be noted that the Federal Reserve also started a series of emergency programmes (CPFF, AMLF, TALF, etc.) to provide certain markets with liquidity, such as the commercial paper market and money market funds. These programmes are not covered by this Box.

(3) To affect long-term interest rates, the Federal Reserve introduced a variant in its already announced purchase programmes in September 2011, known as the maturity extension program (MEP) or «Operation Twist». This operation does not entail any change in the size of the central bank's balance sheet but consists of buying long-term public debt at the same time as selling short-term public debt up to the same amount.

This box was prepared by Judit Montoriol-Garriga 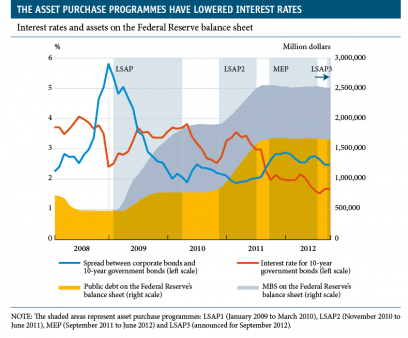