The odyssey of employment in the United States

The Great Recession has raised doubts regarding the reputed flexibility of the US job market. On the one hand, the average real wage has remained relatively stable in spite of persistently weak activity. On the other hand, and more worrying, the length of unemployment and the sluggish recovery in employment are unprecedented, both compared with other previous crises and also compared with other advanced economies. Given the latest employment figures, which show the labour market to be almost at a standstill, the Federal Reserve has opted to up the expansionary tone of its monetary policy with the explicit aim of significantly reducing unemployment. The actual effectiveness of such measures, however, will depend on which factors lie hidden behind employment's anaemic performance. This box aims to throw some light on this issue.

Let us begin, then, at the beginning and look back at the recessionary phase. Between the start of 2007 and October 2010, the pessimistic growth prospects that followed the bursting of the subprime bubble led to a sharp adjustment in staff that ended up doubling the number of unemployed, from 7.5 million to 15.4 million, and raised the unemployment rate from 4.9% to 10.1%. Additionally, job losses during the cycle's recessionary phase were highly disparate among the different states. Given the nature of the crisis, this disparity appears to be closely linked with the severity of the real estate implosion: those states whose house prices recorded the biggest drops also saw the biggest losses in terms of jobs. While employment dropped by less than 4% from pre-crisis peaks to post-recession minimums in Texas or Louisiana, where house prices fell less than 15%, in California, Florida and Michigan, where house prices plummeted by more than 40%, employment accumulated a drop of more than 8%.

The drastic and sudden adjustment in employment during the recession and its marked inter-state disparity contrasts with listless job creation that is widespread throughout the country during the recovery phase. This apathy has meant that, at present, the unemployment rate is still above its pre-crisis level in all states, even those where employment has grown, and that the number of unemployed has not fallen from 12.8 million, a figure that, moreover, offers an excessively benign image of the real situation. Firstly, because it excludes the 8.1 million under-employed, i.e. workers who would like to work full-time but actually work part-time for economic reasons, a number that has also doubled since the crisis began. Secondly, because this has been alleviated by the fall in the labour force participation rate (the proportion of people aged over 16 who form part of the labour force, either by working or by looking for work) from 66.4% in February 2007 to 63.5% in August 2012. If it hadn't been for the decline during this period, and at current employment levels, the unemployment rate would have come close to 11%.

This fall in the labour force participation rate is partly due to structural factors, such as the ageing population and the tendency to lengthen the years of study, but it is also due to cyclical factors, such as the rise in the number of discouraged unemployed who have left the active population. Such discouragement has been undoubtedly triggered by the longer length of unemployment, a trend that started with the recession but has got worse during the recovery phase because of the slow pace at which jobs are being created. Moreover, this process is self-perpetuating: weak job creation lengthens the time spent unemployed and the skills of the long-term unemployed become obsolete, making them difficult to relocate and delaying the recovery in employment even further. The persistence of this vicious circle during the recent crisis has meant that the share of unemployed who have been without work for more than half a year reached 40.0% in August 2012, almost double the pre-crisis maximum of 1982 (22.8%), although the unemployment rate peaked at a higher level (10.8% versus 10.1%) during that recession.

The longer duration of unemployment reflects changes in measurement, the demographic features of the unemployed and the availability of larger unemployment benefits. However, according to estimates by the Federal Reserve of San Francisco, 50% of the increase in the duration of unemployment compared with the crisis in the 1980s can be put down to the severe job losses during the recessionary phase of the cycle combined with persistently weak demand for work. In fact, the extraordinary severity of the job losses during the recession would partly explain why the United States, although it has accumulated greater growth than the euro area since the crisis started (3.9% versus –0.4%), has accumulated a similar decline in terms of unemployment: the unemployment rate remains 3.4 percentage points above its pre-crisis level, compared to 3.5 in the euro area.

In any case, what is most of concern today is the weak demand for employment since the recovery started. The main hypotheses put forward regarding the brakes on this demand are as follows: the typical credit restrictions within a context of private deleveraging after the financial bubble burst; fiscal stimuli wearing out; greater uncertainty regarding the economic outlook; and a situation of low inflation that, combined with the rigidity of lower nominal wages, make firms less able to adjust to fluctuations in activity via wages. Inflation will probably remain contained and contraction in the fiscal area will probably continue but, on the other hand, the bulk of the evidence available suggests that the trends in terms of credit and uncertainty will gradually improve, slowly correcting the cyclical effects on employment demand. In any case, this process is expected to be long and tedious: in July 2012, employment remained 3.5% below its pre-crisis level (see the above graph) and, if the average job creation rate of the last 12 months continues, this level would not be recouped until the end of 2015, a duration of nine years, much higher than the 2.3 years of the previous crises.

The United States has not seen such a long period of unemployment since the Great Depression, leading a number of experts to associate it not only with cyclical effects but also with changes in the structure of
the economy that have harmed its growth potential and raised the structural unemployment rate, i.e. the unemployment rate that will not disappear once the country has got back on its feet in terms of growth. In particular, they refer to inflexibility in the labour market and to workers' skills being out of synch with the jobs available, at a time when resources in the production system are being reassigned after the real estate bubble burst. Nevertheless, empirical evidence suggests that this high and long-lasting level of unemployment is fundamentally due to cyclical effects related to the severity of the recession and to its strong impact on aggregate demand: it is estimated that structural factors related to job market rigidity would have only increased the structural unemployment rate by 1-1.5 percentage points, from 5% to 6%-6.5%, of which only 0.5 can be attributed to job skills being out of synch, and this will tend to diminish over time.(1)

In short, in terms of unemployment, this crisis is bigger and longer than the other five recessionary phases suffered by the US economy since 1945 and the Fed itself expects unemployment to remain above 7% in 2014. However, the bulk of the evidence available suggests that unemployment is persisting mainly because of demand-related cyclical factors and that the structural unemployment rate is far below the current rate of 8.3%. This supports the Fed's decision to greenlight another round of stimuli, since it provides arguments to defend its position, being able to affect employment without applying too much pressure on prices.

This box was prepared by Marta Noguer and Jordi Singla 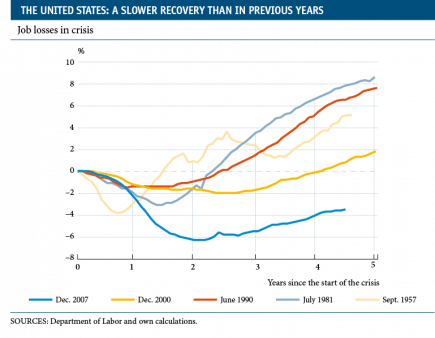