Capital inflows in the Spanish economy: more and better

Spain has recorded a notable increase in capital inflows since the start of the economic recovery in the second half of 2013. The rate of growth is such that, in the first 10 months of 2015, net inflows1 of foreign direct investment (FDI) and portfolio investment2 totalled almost 80 billion euros, 75% more than in the same period of 2014 and four times more than in the same period of 2013 (see the first graph).

During the first three quarters of 2015 public administrations attracted 72% of all capital inflows.The purchase of public debt by foreign investors is therefore the main reason for this increase in capital inflows. Monetary financial institutions3 also receiveda significant proportion, 24% of the total, mainly in the form of equity and, to a lesser extent, debt and FDI. Capital inflows to the business sector were lower and only accounted for the remaining 4% although, if we look at the breakdown by instrument, this figure needs qualifying as a change in pattern is occurring in the sources of corporate financing.

Firstly, there was a divestment of corporate bonds in this period totalling 20 billion euros (see the second graph), a trend that has been observed since 2009 and which forms part of the deleveraging being carried out by Spanish firms. Secondly, net inflows totalled 9 billion euros in equity. This intensification in share purchases by foreigners that started at the end of 2014 has been encouraged by increasing confidence in the Spanish economy's growth capacity and by the positive effect on the stock market of the ECB's programme of quantitative easing. Thirdly, inflows of FDI received by the business sector have also been considerable (14.4 billion euros in the first three quarters of 2015). According to data from the Foreign Investment Register,4 these FDI inflows are spread among different business sectors following a similar pattern to the one before the recession. However, it is necessary to note that, unlike the situation in 2013 and 2014, an upswing has been observed in inflows towards the real estate sector. The fact that this sector has regained its appeal for international investors is a positive sign of its recovery, although part of this increase is due to a search for yield in alternatives to financial assets within a context oflow interest rates.

In summary, although this change in the pattern of international financing is good news, we cannot become complacent. It is difficult to secure the confidence of international investors and this can evaporate quickly should doubts reappear regarding the economy's capacity to grow. That is why it is essential to keep toan agenda of structural reforms that help Spanish firms to continue improving their competitiveness.

1. Net of reverse investment. Negative inflows are investments by resident affiliates in their foreign parents.

3. Excludes the Bank of Spain.

4. These data cannot be compared directly with those from the balance of payments as they do not include the reinvestment of profits, investment by individuals in real estate and financing flows between associated companies. 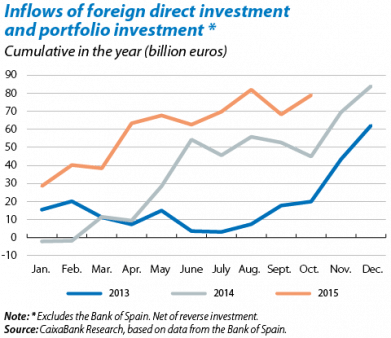