The case of debt in the United States: a movie with a happy ending?

While all the spotlights have been turned on the European sovereign debt crisis, behind the scenes the United States has been trying to establish a fiscal policy that ensures its public debt is sustainable. Although the actors in the drama are the same on both sides of the Atlantic, namely a large deficit and the debt ratio, the United States' commitment to growth represents quite a different strategy to the paradigm of austerity prevailing on the Old Continent. For the moment, the European script has moved the US plot into the background. It might, however, soon get a bigger audience.

According to IMF estimates, the United States ended 2011 with a deficit close to 10% and a debt that is dangerously near 100% of GDP. At the other extreme, Germany is trying to gradually reduce its debt nowadays close to 83%, in spite of having a deficit estimated at 1.7%. Meanwhile, in Spain, the current government is justifying its adjustment programmes after estimating 2011's deficit at close to 8% and its debt around 70% of GDP.

The US libretto is hoping to use debt to set up an expansionary policy and thereby return to the path of growth. Such growth would mean that the future interest on debt could be paid. In Europe the strategy is the opposite; reducing deficit and controlling debt so that the economy can grow again once it is no longer burdened.

For the present, the markets are rewarding the US approach and the consensus of analysts expects the United States to grow by close to 1.8% in 2012 while the euro area will enter into recession (with an estimated fall of 0.3%). For investors, the United States has become a safe haven as, since the start of the crisis, yields on US bonds have fallen to record lows, even paying out negative returns. Apart from the liquidity injection carried out by the Federal Reserve, global uncertainty has acted as a balm on the United States' national accounts.

Unlike the countries in the euro area whose solvency is being questioned (Greece, Portugal, Ireland, etc.), the United States enjoys enough political credibility to adjust its national accounts when necessary and, at present, few doubt its capacity to grow, based on its greater dynamism and flexibility; although its position is weakening on both fronts.

On the one hand, the United States' growth potential might have been harmed. The bursting of the real estate bubble, the deleveraging of the economy and also less spending on infrastructures, which the country will have to tackle at some point, precisely because of the reduction in the deficit, will damage its capacity to grow. In fact, the Congressional Budget Office, the government body that provides Congress with objective budgetary information, places US growth at around 2.5% as from 2016. This is lower than the growth rate for the last 30 years, specifically 3.0%.

On the other hand, as time passes the United States is running out of leeway to adjust its national accounts. Already in 2010, a Congressional Committee(1) warned that «Our nation is on an unsustainable fiscal path», and recommended to start extensive adjustments to achieve a public deficit of 2.3% by 2015. The Congressional Budget Office estimates that, should the current fiscal policy be continued, federal debt (which accounts for almost 70% of US public debt and is legislated directly by Congress) would reach almost 100% of GDP in 2020 and interest would total a trillion dollars the same year (equivalent to 4.1% of GDP in 2020). The graph below shows in yellow (alternative scenario) the path that debt would take if no measures were implemented.

Moreover, one of the pillars that might sustain the credibility of fiscal policy is seriously in doubt. The United States has a debt ceiling (the maximum amount that can be reached every year by the central government's debt, known as Federal debt in the United States) which needs Congress's approval to be raised. However, this ceiling does not represent any effective limit as it has been increased without any major complications almost every time this has been necessary.

In addition to being far from an instrument to control public finances, the debt ceiling is actually making it difficult to define a fiscal adjustment plan. This was highlighted last summer when another raise was necessary to be able to finance the debt maturing. This time, however, differences between Democrats and Republicans delayed approval for the increase up to one day before the debt came due, thereby fuelling rumours of a possible default. The reason behind these differences: the lack of agreement between the two large parties regarding how and when fiscal consolidation should be carried out.

These signs of political paralysis, almost unheard of in the United States, justified the agency Standard & Poor's withdrawing the country's triple A rating, the highest possible. The agency also believes that the agreement reached between Republicans and Democrats «falls short of what... would be necessary to stabilize the government's medium-term debt dynamics».(2) In particular, the Budget Control Act passed last summer authorizes an increase in the debt ceiling of 2.1 trillion dollars (14% of US GDP in 2011) in 10 years. This rise is gradual and provides enough leeway so that the ceiling is not expected to be raised again until after November's presidential elections.

In exchange, a reduction in current expenditure has been established totalling 917 billion dollars over the next 10 years, which immediately came into effect, and a two-party commission was set up called the «Supercommittee», with the aim of identifying a further 1.5 trillion of structural adjustment, also over the next 10 years. The Act also stipulates that, if the Supercommittee did not reach an agreement by 23 November, there would be an automatic adjustment of 1.2 trillion, whose cost would be shared equally between domestic and defence spending.

Finally, the Supercommittee did not reach an agreement and the automatic adjustments will therefore begin in January 2013. Consequently, the aim is to stabilize debt and place the United States on the blue line shown in the graph below (main scenario). Both defence cuts and also the cuts in domestic spending are not detailed and Social Security, Medicaid (healthcare for low income people) and other programmes for people on low incomes are exempt. This lack of precision will perhaps give rise to further rounds of negotiation after November's elections.

Although there are no signs that a tragedy is probable or imminent, the higher the debt, the greater the risk, as well as the greater likelihood of further rating downgrades. The public is fickle and Europe's experience has shown that adjustments are more painful the later they occur, and it's not the same to make adjustments during a boom as during a time of uncertainty. The United States has chosen to wait until things improve and, for the moment, it seems to be doing well.

(1) National Commission on Fiscal Responsibility and Reform (December 2010), «The Moment of Truth».

(3) Series of assumptions established by the Congressional Budget Office in «The Long-Term Budget Outlook» (2011).

This box was prepared by Víctor Burguete 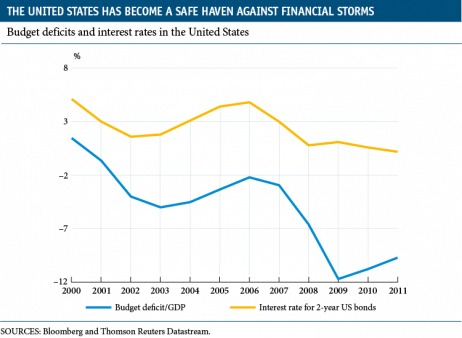 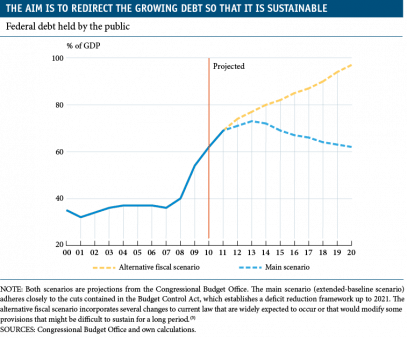