China, at the heart of «Factory Asia»

In addition to being the region's leading demographic and economic power, China has now become the core of so-called «Factory Asia». This term refers to the continent's particular industrial interconnections that have undoubtedly been a leading factor in the considerable progress observed in the last few decades in a large number of the countries in the area. But the future of this success story is not guaranteed, particularly given the significant transformations the Chinese giant is undergoing.

According to the United Nations' figures, intermediate goods and services account for about 60% of international trade. These intermediate inputs are moved from one country to another as they are successively incorporated within the production processes of other goods and services, until reaching the end of the chain. At this point, the goods and services are ready to be consumed by their end users. In other words, over the last few years production processes have fragmented beyond the countries' borders, giving rise to «global value chains» (GVC). Different corporate offshoring strategies have shaped these chains but their spread is due to two key events: firstly, the advances made in transportation and, subsequently, the revolution in information and communication technology (ICT). Both have helped to «shorten» geographical distances to an unexpected extent.

Asian countries (and especially those of Southeast Asia) represent a case in point for these chains due to the high degree of fragmentation applied in producing many of their products, as well as the huge complexity of many of them (such as the electronics industry). It is precisely this exceptional nature, together with the fact that most of the final production is shipped to advanced countries (in other words, the US and Europe), that has led to the terms «Factory Asia» and «the world's factory» being used for these countries as a whole and for the processes that make up this highly integrated GVC. The drastic cuts in import tariffs carried out by many of the region's countries, either individually or multilaterally, have been another key factor in the emergence and success of the Asian GVC. In these extra-territorial supply chains, the different inputs or intermediates incorporated into the final good cross the borders of the countries involved in the process many times, so high import tariffs would make the final manufactured good too expensive. It is worth mentioning the free trade agreement established in 1992 by the countries that make up the Association of Southeast Asian Nations (ASEAN) and subsequent agreements by this Association with other countries in the region, such as China in 2005, Japan in 2009 and Korea and India in 2010.

China's role is crucial in this network of commercial and business relations that make up «Factory Asia». As of today, China absorbs half the intermediate goods exported by the rest of the Asian countries and supplies them with close to a third of all intermediate goods received from abroad. This makes the Asian giant the main destination and source of inputs for the region (see the first graph on the importance of China for its neighbours in terms of overall trade). This is undeniably a hegemonic situation but a relatively recent one as, in the 1990s, the heart of this factory of the East was still Japan. It was not until the middle of the first decade this century that China took over as leader (as can be seen in the second graph).

The Chinese government's drive to progressively open up the country's economy to international trade and investment has certainly encouraged this rapid shift in the centre of gravity of Asia's production chain. China's transition towards a more open economy started in the 1980s with the authorisation of inflows of foreign direct investment, further boosted by the creation of four zones with special economic privileges. This process culminated in 2001 with the country joining the World Trade Organization, forcing it to reduce its import tariffs. The large number of Chinese firms specialising in processing components or assembling different intermediate products from the rest of Asia has also helped to place China at the centre. Its very large and cheap workforce at the start of these reforms towards a more open economy encouraged such business. As a result, the last stop for a large number of the «Made in Asia» manufactured goods consumed in the US and Europe is China where, after giving them the finishing touches, they are loaded onto one of the many container ships crowding the country's busy ports (six of the largest ten ports in the world in tonnage capacity terms are located in China). It therefore comes as no surprise that, year after year, China records large trade surpluses with the euro area and the US (62 and 222 billion dollars, respectively, in 2013, the equivalent of 1% and 2.5% of China's GDP) and deficits with many of its Asian neighbours (1% with Korea and 0.5% with Taiwan, for example).

This singular anatomy of the production process must be taken into account when evaluating aspects such as economic policy and future prospects. The frequent accusations received by China of its mercantilist behaviour due to its trade surpluses with the large advanced economies do not always consider that these are largely the consequence of the productive organisation of the Asian chain and that, consequently, there are many more countries involved when handing out pluses and minuses. On the other hand, given China's central role in «Factory Asia», we must wonder about the consequence of the much-feared slowdown in the Asian giant on the rest of the countries taking part in the chain. Above all, it is important to remember that the main threat in the short term to the demand for «Made in Asia» products is the uncertain outlook for the US and the euro area and not so much that of China. In fact, in spite of the improvement expected in the advanced economies over the coming years, their potential demand for Asian manufactured goods is actually quite moderate and vulnerable in comparison with previous cycles, due to three factors: weaker financial conditions and confidence after the tough crisis, an older population and the growing trend in some multinationals towards reshoring. In this respect, the change in the growth model that the Chinese economy hopes to encourage in the medium term, with greater weight being given to domestic consumption, will help to sustain Asian production in the face of more contained demand from the advanced economies. This model aims to give China's new and growing middle classes a larger consumption capacity which could undoubtedly be easily satisfied with the region's manufactured goods. But it is also true that, until this transformation matures, a slowdown in China due to domestic factors (for example, problems in the real estate and financial sectors) would affect the rest of the region's countries. Firstly, because of a drop in demand for manufactured goods from «Factory Asia» on the part of today's consuming middle classes in China. But especially because such a slowdown would more than likely lead to a significant reduction in the country's public and corporate investment, both of which have required large amounts of commodities from neighbouring countries.

In short, the development of «Factory Asia» has clearly been a winning strategy. The best proof of this is the progress made by Southeast Asia in the last few decades. Similarly, China's more open stance, gradual but powerful, has been crucial to the success of this regional production chain. A success whose survival depends, once again, on the Asian giant and its capacity to orchestrate a change in model that sustainably boosts Chinese consumers. 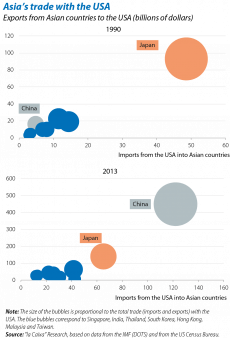