Companies and productivity: a matter of size

Spain's business fabric is typically highly fragmented, with a clear predominance of small and micro-enterprises and, on the other hand, a small number of large firms. This distribution might be partly a reflection of obstacles to growth or disadvantages in being large, an issue that is far from irrelevant when it has been proved that larger companies not only tend to be more productive but are also more likely to export. Given the current situation
of very weak domestic demand, it is essential for our firms to gain both domestic and foreign market share,
and this requires improved productivity and savings in costs. In short, boosting competitiveness and internationalization, two elements that are positively associated with the size of a company. That's why this box advocates a regulatory environment that not only encourages the creation of firms, mostly very small when they start up, but also their growth.

From an international perspective, the average size of a typical Spanish firm is smaller than that of other countries with a similar degree of development. According to data gathered by the OECD, in Spain in 2007, 3,305 firms were operating with more than 250 workers (considered to be large firms) out of a total of 2,712,397 firms. This figure is slightly lower than its equivalent in Germany, for example, where 8,995 large firms were operating out of a total of 1,818,909 in the same period. On the other hand, Spain stands out as one of the advanced countries with the largest share of micro-enterprises or firms with fewer than 10 employees, accounting for 93% of all companies compared with 83% in Germany, which coincides with the OECD average.(1)

In terms of employment, small and medium-sized enterprises (fewer than 250 employees) account for 78% of all employment in Spain, while in Germany they employ just 60.4% and, in the United States, 47.3%. Moreover, the distribution of employment also shows a clear bias towards micro-enterprises with 38.3% of the total compared with 19% in Germany and 11% in the United States. Although industrial firms tend to be larger than service firms, Spain's bias towards small-sized companies cannot be put down to the tertiary sector's greater weight. If we look just at the manufacturing branch, SMEs also employ the lion's share with 73% of all workers, while firms with fewer than 20 workers employ double the number of workers as in Germany (29% versus 15%). Large manufacturing firms, however, only employ 27% of the sector's total employment in Spain, compared with 53% in Germany (see the graph above).

It is now well-known and documented that larger firms are more likely to export.(2) The main reason is simply the presence of fixed costs for breaking into export markets, which a larger company can more readily afford. In Spain, during the period 2001-2007, only 12% of all firms exported some kind of good; however, among large firms, 57% did so compared with just 2.9% of micro-enterprises.(3) Similarly, a recent study concludes that, with the collapse of global trade in 2009, those Spanish companies that gave up exporting the most were generally the smaller firms. The findings also reveal that, in the case of large companies, export volumes were adjusted largely by reducing the intensive margin (in other words, the average value exported) and not so much via the extensive margin (leaving the market), an option that was used more often, however, by the smaller firms.(4)

In addition to being more inclined to export, larger firms also tend to be more productive. The positive association between productivity and company size can be explained, fundamentally, by the presence of increasing economies of scale that help to progressively reduce unit costs as a company grows larger. According to data gathered by the OECD on productivity in the manufacturing sector, large Spanish firms are almost 3 times more productive than micro-enterprises and 1.6 times more productive than the average-sized firm. These differences in productivity due to size are comparable to those observed in other countries, such as Germany (see the graph above).

These data also reveal a regularity that may be surprising at first glance: when similar-sized companies are compared, the productivity of Spanish firms is not very different from that of their German peers. In fact, large Spanish firms are even more productive than large German firms. On the other hand, micro and small enterprises are somewhat less productive in Spain. This suggests that the difference between the average productivity of German manufacturing firms compared to Spanish (20% higher in Germany) might be due to the lower share of large firms in Spain.

In this respect, it is revealing to calculate how the average productivity of Spain's manufacturing sector would change if the distribution of employment among firms of different sizes were the same as in Germany. The findings show that, in this case, Spain's average productivity would be the same as in Germany. If, however, we maintain the current composition by size of Spanish companies but assume that German companies of the same size are equally productive, we find that Spain's average productivity would still be 16% lower than that of Germany. This illustrates that, from a strictly accounting point of view, Spain's lower average productivity compared with Germany can certainly be put down to the composition effect resulting from the excessive fragmentation of Spain's business fabric and its bias, in employment terms, towards small firms, which are less productive not only in Spain but everywhere.

So why are there so few large firms in Spain? The bulk of the evidence available suggests that Spain's smaller average company size results both from the inflexibility and obstacles in the institutional environment and the market in which firms operate (which makes it difficult for them to grow), as well as from broader social and cultural factors that limit the horizon of many business projects from the start. These limiting factors are explored in more detail in the boxes entitled «To grow or not to grow, that is the problem», «Does labour regulation allow company growth?» and «SME financing in Spain: short-term emergency, long-term challenge» in this issue. The first two examine the institutional environment's influence on company growth, while the third tackles the relationship between access to financing and company size.

In summary, large Spanish firms are competitive and, in recent years, have demonstrated notable dynamism in exporting. The problem lies in the fact that these firms still make up a very small proportion of the economy. Given that domestic expenditure is likely to be weighed down by adjustments for a long time to come, the best bet for the Spanish economy to get back on the path of growth is to gain market share abroad. This undeniably requires a larger number of our companies to jump on the bandwagon of productivity and internationalization; and it's clear that growing in size will make for a cheaper ride. 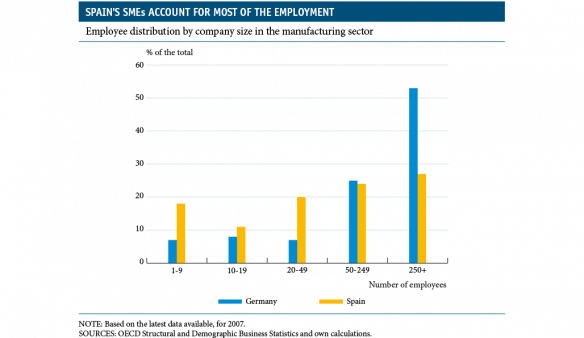 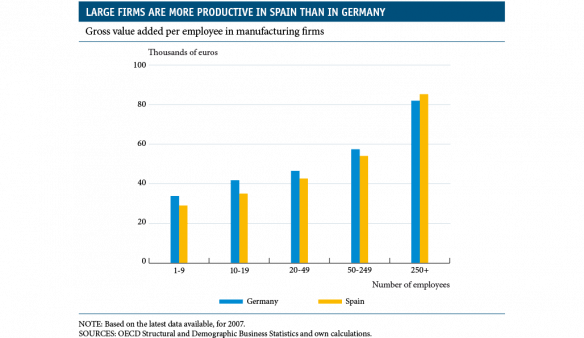