The deterioration in the income balance: reasons and trends

Current account adjustment has been substantial over the last few years but the trend has changed direction in the last few months. This is partly due to the deterioration in the balance of goods but the income balance is also playing a key role: the deficit rose by almost 5 billion euros during the first half of 2014 with 55% of the change occurring in the current
account.

An important part of the increase in income deficit can be explained by the drop in yields from foreign assets held by Spanish individuals. The sharp fall in interest rates at a global level has been pushing down yields on Spanish investments abroad for several years now. Although foreign assets held by Spanish nationals have remained stable over the last few years, their lower returns reduced income by 17 billion euros between 2008 Q4 and 2014 Q1. As can be seen in the second graph, the fall in yield was particularly dramatic between September 2008 and September 2010.  After a stable period, it then started to fall again in March 2012. Yield on national liabilities held by foreigners also fell but has remained stable over the last few quarters. This is due to the growing share of public debt among Spanish external liabilities (from 10.4% in June 2012 to 18.6% in March this year) as their yield is, on average, higher than that for other liabilities.

The second factor that lies behind the deterioration in the income balance is the larger volume of Spanish liabilities held by foreigners. In 2014 Q1 these rose more than total liabilities of the economy, increasing the percentage of Spanish liabilities held by foreigners to 23.1%. This level is similar to the one recorded between 2006 and 2010, highlighting the fact that foreign investors are regaining confidence in Spanish assets.

Two conclusions can be made from these factors behind the deterioration in the income deficit. (i) The fundamental reasons for this deterioration are not detrimental: it is not due to a disproportionate increase in external debt or to the sale of foreign assets held by Spanish nationals. (ii) The additional drop in the deterioration of the income deficit appears to be limited: the yield on Spanish assets abroad will not fall much further and the share of Spanish assets held by foreigners is almost back to normal. This last factor, however, is the one that is most uncertain and must therefore be closely monitored. 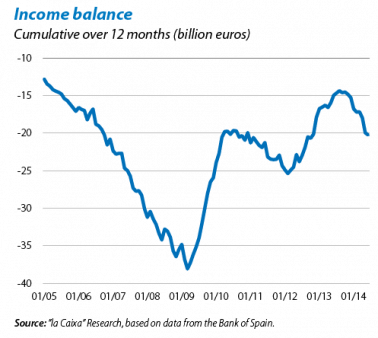 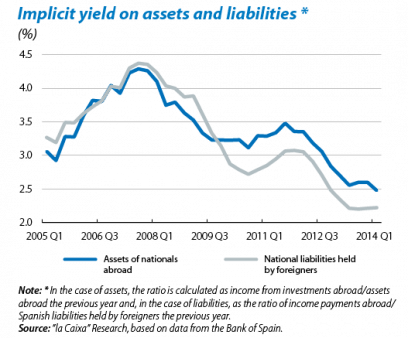 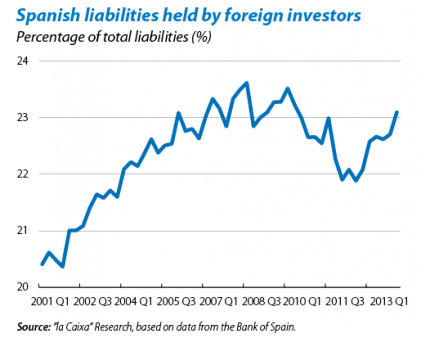