The breakdown of GDP for Q4 shows an improvement in the euro area's growth rate. GDP grew by 0.3% quarter- on-quarter with a positive contribution from household consumption (0.1 pps), investment (0.2 pps) and the foreign sector (0.2 pps). Public expenditure contributed zero and inventory changes deducted 0.2 pps from domestic demand. Of note is the good performance by investment, up by 0.4% quarter-on-quarter after spending the last two quarters in negative terrain, as well as the positive trend in exports, boosted by the euro's depreciation. By country, the disparity in growth rates is reflected in the breakdown of GDP for the two largest economies in the euro area: while Germany grew by 0.7% quarter-on-quarter with very good figures for investment and private consumption, France grew by just 0.1%, supported only by public expenditure and with negative investment.

The OECD improves its GDP growth outlook for the euro area to 1.4% in 2015 and 2.0% in 2016, 0.3 pps above its November forecasts. The international organisation revised upwards its growth figures for the main countries especially because of the positive effects of falling oil prices and the expansionary monetary policy of the European Central Bank (ECB). It notes, however, that both factors are temporary, warning that, in order to sustain such growth in the long- term, temporary supports must be accompanied by structural reforms. By country, Germany's revision is particularly significant (+0.6 pps) up to 1.7% in 2015, due to the solidity of its growth in the last quarter and to the boost provided by the aforementioned temporary factors.

Business indicators suggest the recovery speeded up in 2015 Q1. The composite PMI for the euro area saw its highest level for the last four years, reaching 54.1 points in March thanks particularly to good figures from the services sector. The economic sentiment index also maintained a clearly upward trend. The maximum exponent of this positive tone is Germany where both the composite PMI and the IFO (business climate index) and ZEW (index on investor and analyst expectations) indices improved in March, confirming the country as the driver behind Europe's growth. In France the composite PMI is still in the expansionary zone although March's figure halted the upward trend seen in the last two months. In spite of the slight deterioration in some indicators, first quarter figures for the French economy are in line with moderate growth in GDP.

Domestic demand will accompany the improvement in activity. Demand indicators soared in 2015 Q1, revealing strong private consumption. The drop in oil prices is helping households to make appreciable savings, resulting in additional consumption in other goods. This can be seen in the euro area's retail sales, up by 3.7% year-on-year in January, the highest figure since 2005. The two largest economies in the euro area are leading this trend with Germany and France recording an increase of 5.4% and 4.1% respectively. This good tone is also reflected in consumer confidence, now back to its pre-crisis level.

Employment improves in 2014 Q4, boosted by good activity figures. Employment increased in the euro area by 0.1% quarter-on-quarter in the last quarter of 2014. The differences between countries are considerable given the disparate situations of their respective labour markets and growth patterns. In countries such as Spain, where a large number of jobs were lost during the crisis but the recovery has now picked up speed, there is high growth in employment: up by 0.7% quarter-on-quarter in 2014 Q4. In Germany, however, a country already close to full employment, the increase was just 0.2%. France's sluggish growth is also reflected in its employment, which remained unchanged. After a dubious 2014, expectations for the euro area as a whole improved during 2015 Q1, especially in manufacturing. The unemployment rate is following a similar trend, falling to 11.3% in February. By country, of note is Germany's low unemployment rate of 4.8%. Employment expectations suggest the improvement will continue over the coming months.

The situation of the labour market, uneven across the different countries, is reflected in their labour costs. No upward pressure can be seen on labour costs in those countries with high unemployment. For example, these fell by –0.3% year-on-year in Italy and only grew by 0.1% in Spain. But in Germany, where the economy is close to full employment, there is more pressure to increase wages and this is reflected in its labour costs, up by 2.0%  year-on-year in Q4. However, wage moderation continued in the euro area as a whole and labour costs grew by 1.1% in Q4 compared with the same quarter a year ago. Wage containment, together with the trend in the   euro-dollar exchange rate which ended the month of March at 1.07 dollars per euro after almost reaching parity, are both boosting exports. In January the current account balance, cumulative over 12 months, stood at 247 billion euros (2.4% of GDP), 23% higher than the figure in January 2014, especially thanks to the improved balance of trade for goods and income balance. With a view to 2015 and 2016, this improvement should continue as the effects of the euro's depreciation really take hold.

Inflation picks up in March although it is still in negative terrain. The euro area's general inflation rose by 0.2 pps in March to –0.1%, supported by a smaller drop in energy prices (especially fuel). Core inflation, after increasing by 0.1 pps in February, fell again to 0.6% in March. This trend can be explained by the behaviour of core inflation in Italy, down by 0.4 pps in March due to the fall in price for services and industrial goods.

The Greek storm refuses to die down and growth prospects are deteriorating. Increased problems in Greece's economy are reflected in the changes made to the growth forecasts by the consensus of analysts. From the time elections were announced in December 2014 up to March, the GDP growth forecast for 2015 has been revised downwards by 0.7 pps. Negotiations between the European institutions and the Greek government are following a tortuous route. Although an extension was agreed for the bail-out programme in February, until a satisfactory agreement is reached on the structural reforms that must be carried out and until the Greek government actually starts to implement them, the 7.2 billion euros remaining from the bail-out will not be paid. Without this payment, the Greek government will find it very difficult to meet its commitments in April. Time is running out and it is important for both parties to continue negotiations to reach a satisfactory conclusion.

In spite of the good figures observed in 2015 Q1, macroeconomic imbalances in the euro area are increasing according to the European Commission. The short-term risks caused by the Greek crisis are on top of the area's long-term challenges. In spite of the improved tone of Europe's economy, The Commission has warned that structural reforms must continue in order to ensure long-term growth. In its recent report on macroeconomic imbalances, the Commission has increased from three to five the number of countries with excessive imbalances requiring decisive intervention in the last year, while the number of countries with slight imbalances has fallen from seven to six. By country, Germany has a slight imbalance because its current account surplus is too big. France and Italy, both with excessive imbalances, have high public debt and deficit and are suffering from a serious loss of foreign competitiveness. It is worth noting that no single country has been identified without imbalances, either in the current report or in the one published last year. The Commission also evaluates how closely its  recommendations have been followed and the measures taken to date to correct existing imbalances. Around 47% of the recommendations have been implemented very little or not at all while just 3% have been fully applied. The conclusion is clear: the agenda of reforms must be speeded up to ensure the euro area's growth consolidates in the long term as the temporary supports it currently enjoys will not be around forever. 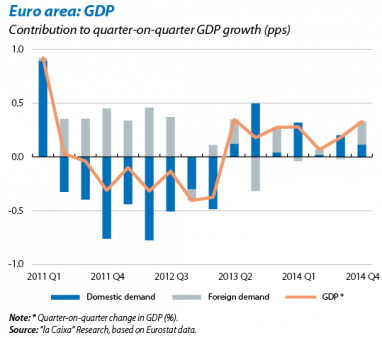 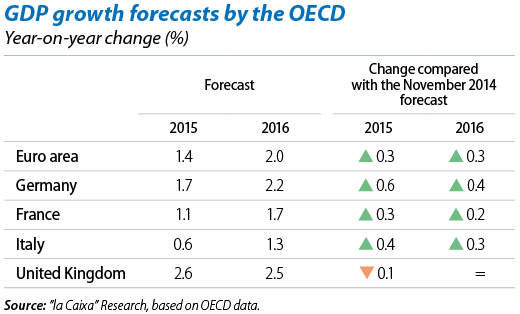 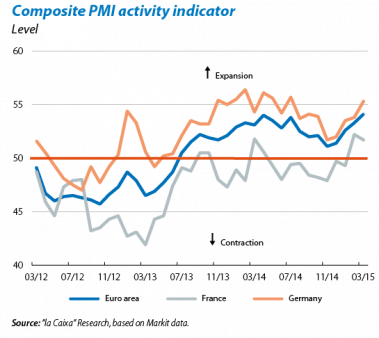 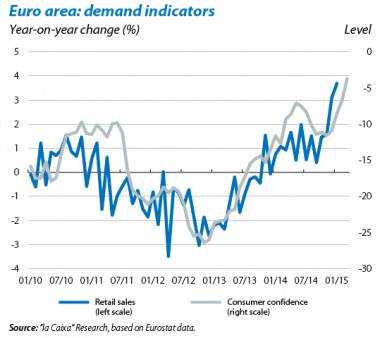 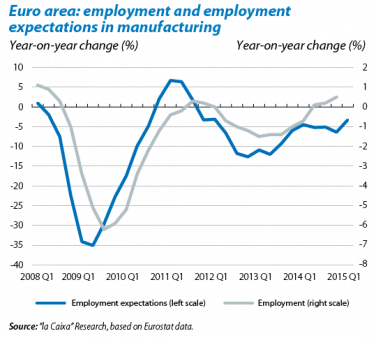 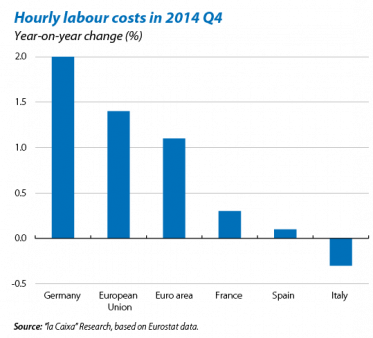 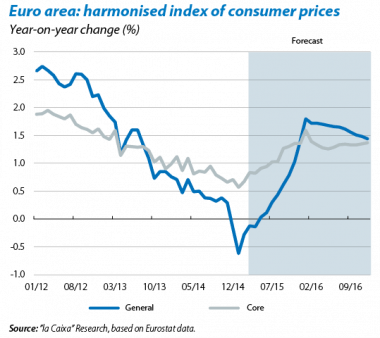 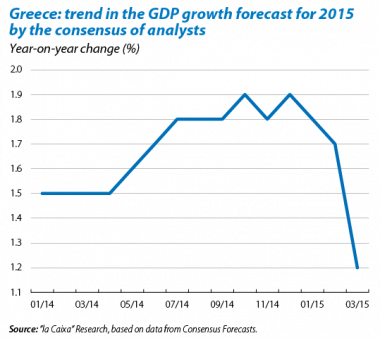 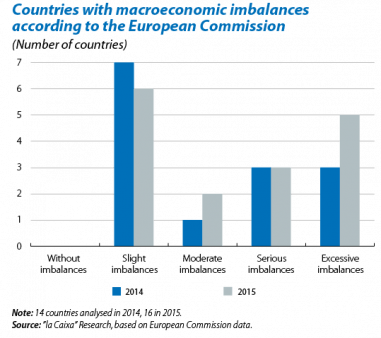