Widespread improvement in growth prospects. The good activity data posted over the last few months, in many cases better than expected, have notably dispelled doubts regarding the Spanish economy's possible relapse. This greater confidence in the recovery can be seen in the higher growth forecasts for 2014 published by the main international organisations over the last few months. In April it was the turn of the International Monetary Fund and the Spanish government, with forecasts 0.7 and 0.5 p.p. higher than those of last autumn, respectively. This scenario contrasts with the one seen in 2011 when, although the first few signs of recovery could be glimpsed, growth forecasts remained almost the same. There are many reasons for the current turnaround but it is particularly due to the improvements in Europe's governance, easier monetary policy and the greater rebalancing of Spain's economy, encouraging growth in domestic demand. This revival is still in its early stages, however, and reforms must continue both at a European and a national level, as they are still vital to ensure the recovery continues.

GDP growth rose by 0.4% quarter-on-quarter in 2014 Q1, 0.2 p.p. higher than the previous quarter's figure. The breakdown by component has yet to be published but estimates by the Bank of Spain point to more dynamic domestic demand in the first few months of the year as the main reason for higher GDP growth in 2014 Q1. Business indicators for the first few months are also in line with this estimate. The increase in industrial production during January and February, namely 2.2% year-on-year, augurs higher investment. Retail sales remained positive albeit growing more tenuously in the same period, corresponding to a rate of growth in consumption in 2014 Q1 of slightly below the quarter-on-quarter figure of 0.5% recorded in the previous two quarters. Lastly, although the process of fiscal consolidation will continue to slow up public consumption, we expect this to have less of an effect in 2014 Q1 than in 2013 Q4, when it decreased by 3.9% quarter-on-quarter.

Private consumption and investment will continue to boost domestic demand throughout the year. Their recent trends give grounds for optimism: household consumption grew by 1% during the second half of 2013 and investment in capital goods ended the year up by 9.6% year-on-year. In both cases the outlook is still favourable. Of note for consumption is the sharp increase in household confidence which, in the first four months of the year, has climbed back up to its 2001 level. Improved expectations for the next 12 months, both in employment and the financial situation of households, lie behind this upswing in the intention to consume. The latest data on investment are also encouraging. One good sign of this is the performance by capital goods production, up by 4.4% year-on-year in the first two months of 2014.

The improvement in domestic demand is also accompanied by a higher increase in imports, a trend that can be seen in the latest figures for goods imports. In 2013 these dropped by 1.3% year-on-year compared with an advance of 5.2% for exports. However, in the first two months of 2014, imports have grown at a very similar rate to exports: 3.0% and 4.0% respectively, in nominal terms. As most of the evidence available suggests that domestic demand will gradually get stronger throughout the year, we can also expect the foreign sector's contribution to steadily decline as a result of more dynamic imports.

Exports pick up in the first few months of the year. This smaller contribution by the foreign sector should not eclipse the good performance by exports in the first few months of the year, leaving behind the stagnation recorded in the last quarter of 2013 when they only grew by 0.8%. There are basically two reasons for this acceleration: solid demand from Europe, which is continuing to grow as the euro area recovers, and more dynamic demand from outside the euro area, putting an end to the slump suffered in 2013 Q4. Further improvement in industry's export expectations regarding Q2 suggests a favourable scenario with exports remaining dynamic over the coming months. However, it will still be necessary to maintain the rate of gains in competitiveness to consolidate this upward trend in Spanish exports over the long term. To date, this has been fundamental in the relative share of exports increasing from 24% of GDP in 2009 to 34% in 2013. Another figure reflecting the Spanish economy's greater internationalisation is the increase in its number of exporting firms, growing from around 100,000 during the years prior to the crisis to 150,000 in 2013.

The labour market will take some time to recover. According to the LFS, 184,600 jobs were lost in Q1, a more negative figure than expected given the workers registered with Social Security during the first few months of the year. The seasonally adjusted figures did not offer any good news either: employment fell by 0.1% quarter-on-quarter in 2014 Q1, undoing the good figures from the previous quarter (+0.1% quarter-on-quarter). In fact, this decline would have been even bigger without the public sector creating jobs (11,100), the first positive balance since 2011. However, given the good activity figures, this slowdown in labour's recovery in 2014 Q1 will probably end up being a temporary phenomenon. Nonetheless, the unemployment rate only increased by 0.2 percentage points to 25.9% due to a further reduction in the labour force (of 187,000 people).

Spanish banks are facing the stress tests with confidence. One of the key elements in the tests to be carried out by the European Central Bank this year on the main banks in the euro area is the macroeconomic scenario used to analyse their resilience. In the end this document, which was presented in April, did not come as any great surprise. In Spain's case the most adverse scenario used to analyse the trends in solvency and liquidity of the country's main banks is based on the recession continuing until 2016 and an unemployment rate that reaches 27.1% (3.9 p.p. more than in the main scenario). Although this adverse scenario is quite tough, the restructuring and recapitalisation processes carried out by Spain's banks over the last few years are helping them to handle such tests successfully.

The government presents its Stability Programme 2014-2017 with greater fiscal adjustment for this year. Three messages stand out from this new programme. First, the improved economic situation has allowed the government to revise upwards its GDP growth profile. This is now in line with the forecasts by "la Caixa" Research for 2014 and 2015 and is slightly more optimistic in the long term. Second, the government has presented a more demanding fiscal adjustment for this year, lowering the public debt target by 0.3 p.p., down to 5.5% of GDP. This bigger correction is largely due to the improved economic cycle. The adjustment in the structural deficit (what would be observed if the economy performed at 100%) has remained practically the same, at 0.5 p.p. specifically. Lastly, most of the fiscal adjustment is once again concentrated in the accounts of the central government and autonomous communities, with deficit reductions of 0.8 and 0.5 p.p. in 2014, respectively. It is the opposite situation with local government corporations, which are expected to see a 0.4 p.p. reduction in their surplus compared with last year.

It is crucial for the reforms to continue. The improved outlook described above is also reflected in the lower pressure on Spain's public debt, whose yield has now reached historically low levels. However, to guarantee a good rate of growth and job creation in the medium and long term, it is still vital to carry out an ambitious agenda of structural reforms. Along these lines, the government has published its new National Reform Programme which revolves around five key areas: fiscal reform, combating unemployment, promoting competitiveness, modernising public administrations and restoring financing conditions. There can be no doubt that this programme aims to continue the reforming strategy of the last few years. 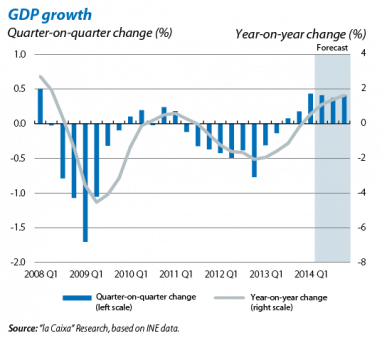 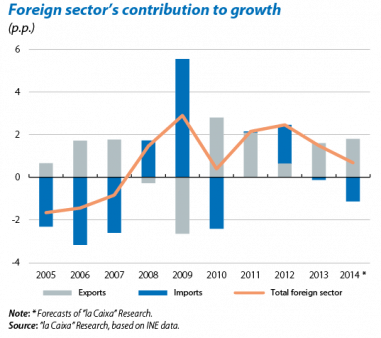 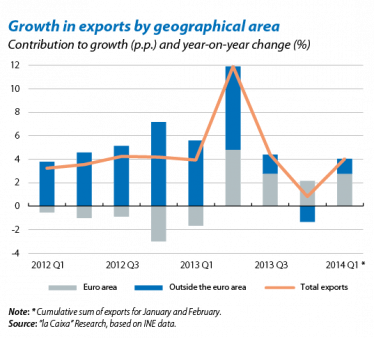 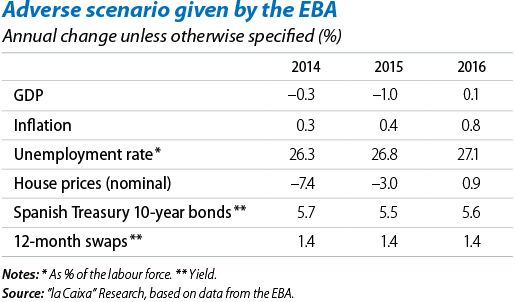 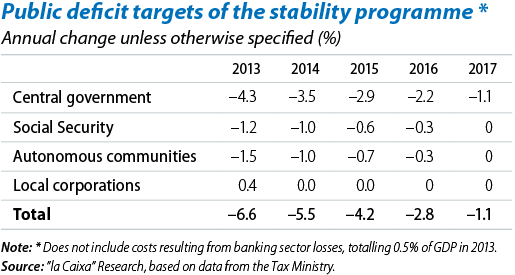