Looking at the trade balance in more detail, it is useful to differentiate between energy and non-energy goods. The trend in energy goods was strongly affected by oil prices as the Spanish economy depends heavily on crude oil imports. While the energy bill was inflated by the higher oil prices in 2011 and 2012, this subsequently fell as from 2013 thanks to the slump. The balance of non-energy goods was mainly responsible for the improvement in the CA from 2010 to 2013. Strong export performance, boosted by gains in competitiveness, was joined by weak imports due to a drop in domestic demand. As from 2014, however, and although exports of non-energy goods were still very strong, the recovery in domestic demand pushed up imports and the balance of non-energy goods therefore remained stable.

Like the non-energy goods balance, the services account has gone through two different periods. During the economic crisis from 2010 to 2013, it contributed positively to the improved CA while, during the recovery from 2014 to 2016, its contribution was slightly negative given the upsurge in domestic demand. Nevertheless, there was considerable growth in exports of tourism and non-tourism services during both periods. Spain’s tourism industry has performed exceptionally, setting new records every year for its number of international tourist arrivals, helped by the geopolitical disturbances in the Middle East and North Africa but especially by improved competitiveness in the sector. The World Economic Forum has once again ranked Spain number one in its global competitiveness index for tourism. But non-tourism services have also been very positive, as explained in the Focus «The rise in exports of non-tourism services» published in MR04/2016.

Finally, the third component of the CA, the income balance, has managed to substantially reduce its deficit since 2012 thanks to low interest rates and the consequent decrease in foreign interest payments.

The CA has therefore improved thanks to gains in competitiveness in the Spanish economy but it has also been spurred on by lower oil prices, low interest rates and tourism’s exceptional performance. To illustrate how the CA would have evolved without these factors, we have calculated what the current account balance would look like without energy goods, tourism and income. The second chart shows that, in 2016, this balance was around 1.5% of GDP and that it has also improved significantly since the start of the crisis. 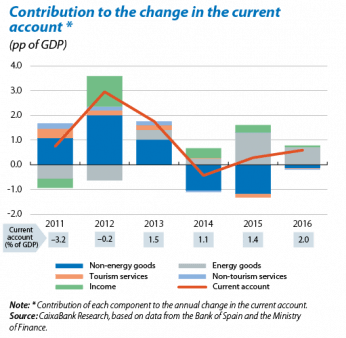 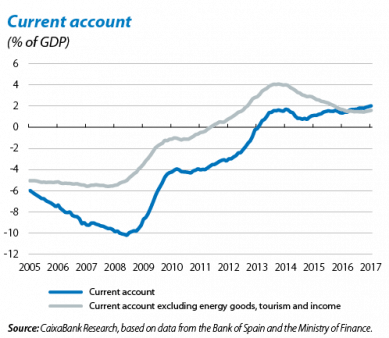 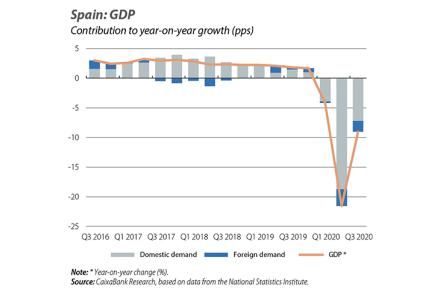