Favourable prospects but with downside risks

Thanks to the expansionary effects of cheaper oil and more accommodative monetary policy, the world economy is speeding up its rate of activity at the beginning of 2015 (we estimate 3.4% global growth in Q1 compared with 3.3% in 2014 Q4). Nonetheless, this recovery is far from uniform: the United States and China are leading growth in spite of a recent slowdown, while Japan has barely started to move away from recession. With regard to other important emerging countries, Brazil's difficulties are taking over from the problems of Russia as the main source of tension.

The US ends 2014 and starts 2015 slightly worse than expected. Definitive GDP figures for 2014 Q4 show 0.5% growth quarter-on-quarter, lower than the 0.7% initially published (although the annual figure remains at 2.4%). Some activity indicators have also provided slightly disappointing figures at the start of 2015, particularly in the area of household spending. This temporary bad patch, partly linked to adverse weather and the notably strong dollar damaging US exports, justifies our downward revision of growth for 2015 from 3.5% to 3.1%.

In spite of this temporary weakening, the underlying trends still point to a more than acceptable recovery as the 3.1% growth achieved is the best figure since 2005, clearly above the country's potential growth which the Federal  Reserve (Fed) estimates at 2.3%. This good outlook depends on a number of positive trends continuing. In spite of the ups and downs in consumption variables in January and February, household spending continues to be supported by the favourable trend in the labour market, especially in terms of job creation: 295,000 jobs were created in February, accumulating 12 consecutive months of figures above 200,000. That same month  unemployment stood at 5.5%, the lowest since May 2008. In spite of this improvement in labour, wage rises, at 2.0% year-on-year in February, are still subdued.

Corporate investment, the upswing in the real estate market and fiscal policy will all help to boost growth in 2015. Corporate investment, which had already recovered appreciably in 2014, will continue to advance at a significant rate thanks to the combination of relatively accommodative financial conditions, high earnings (although they are very likely to be more contained than the figures posted a few months ago due to the impact of the strong dollar) and good prospects for demand. This predicted path for investment is further confirmed by the trend in the ISM business sentiment indices which have remained at levels associated with expansion in activity, in both manufacturing and services. The underlying data for prices and transactions also suggest the upturn in the real estate market is continuing, in spite of the bad weather having a negative effect on its indices. Lastly, in 2015 fiscal policy will be somewhere between neutral and expansionary, unlike in previous years.

Inflation is still surprisingly lethargic. Although inflation rose by 0.1 pps in February, it stood at a moderate 0.0% year-on-year. Nonetheless, core inflation (without energy or food) posted a more dynamic increase (1.7%). Given this situation of little inflationary risk (we should note that wages continue to appear contained), we still expect the Fed to wait until autumn to start raising the reference interest rate.

Japan is growing less than announced but with a better composition. Growth in 2014 Q4 was revised downwards from 0.6% quarter-on-quarter initially published to 0.4%, so GDP has fallen by 0.1 pps for the year as a whole. However, the breakdown in growth is more favourable as private consumption has been revised upwards and a large part of the downward revision is concentrated in the accumulation of stock. This good composition, together with the full implementation of monetary and fiscal stimuli underway and the favourable trend expected in wages (an agreement has been adopted to increase the basic wage by 2.5% in 2015, which will help to boost domestic demand), means we have kept our growth forecast for the Japanese economy in 2015 at 0.8%.

A mixture of good (the foreign sector) and bad (inflation) at the start of 2015. Although the trade deficit increased in February, this was due to the negative effect on exports of the Chinese New Year. Without this impact, exports would have grown by 6.9% year-on-year compared with the actual figure posted of 2.8%. Similarly, the underlying balance of trade (discounting oil purchases) for the last 12 months stood at 0.9% of GDP. The low inflation rate, however, is far from the target set by the Bank of Japan (BoJ). In February the CPI without foods and discounting the effect of the VAT hike stood at 0.0% year-on-year, very far from the central bank's target of 2%. Without deducting the VAT effect, the resulting figure is 2.0%. The general CPI shows a similar trend: 2.2% year-on-year (0.1% without VAT).

A hard landing in China and the fragile five. Two crucial questions are grabbing the attention regarding the emerging economies: the possibility of a hard landing in China and the situation of the so-called «fragile five». With regard to the current situation for China, the downside risks have increased. This worsening in the balance of risks has essentially been caused by a battery of figures (industrial production, retail and consumer goods and electricity production) that suggest domestic demand might be adjusting its rate of growth. There has been an appreciable improvement in the foreign sector, however, thanks to the combination of more vigorous exports and a drop in imports (partly due to the lower commodities bill). In spite of the country's domestic weakness, the government still has considerable margin to implement accommodative economic policies. Last November the People's Bank of China started to lower the official interest rate, which has gradually gone from 6.00% to 5.35%. This is logical given that inflation is still within a zone of minimal tension: even after a higher upswing than expected in February, the CPI is growing at a moderate rate of 1.4% year-on-year. Measures have also been taken in the last few months to boost investment in infrastructures and the real estate sector. All this points to economic policy attempting to bring growth gradually in line with the new annual target set by China's National Assembly (7.0%).

India takes advantage of the opportunity provided by the improvement of its macroeconomic imbalances. In 2013
the expression «fragile five» was coined to identify those emerging economies whose imbalances (fiscal, inflation and current account) implied a weakness when moving from an international environment of low interest rates and ample liquidity to another, more restrictive environment in monetary terms. Two years later, when the Fed's future actions are now approaching this tighter environment, some of these fragile five have tended to noticeably improve their vulnerabilities. This is the case of India, which has simultaneously managed to improve its public deficit, current account and inflation since 2013 (the trend in prices has helped the central bank to lower its reference rate by 0.5 pps for the year to date). However, other emerging economies such as Turkey and particularly Brazil are still under financial pressure: their currencies are two of the ones depreciating the most against the dollar since  January.

Brazil as an exponent of the new emerging risks. The case of Brazil is quite paradigmatic of the doubts surrounding these countries. The loss in value of the Brazilian real has been due to a combination of three factors: less intervention by the central bank to bolster the Brazilian currency, a deterioration in activity (GDP fell by 0.2%  year-on-year in 2014 Q4 and we expect it to deteriorate further in the coming quarters) and the uncertainty  surrounding the capacity of the new government to implement more rigorous fiscal policies. But, beyond all these factors, what is perhaps damaging the country is the persistence of an imbalanced macroeconomic framework. It is estimated that both the public deficit and the current deficit will have reached the zone of 4% of GDP in 2014 while inflation, the most worrying of these imbalances, climbed to 7.7% year-on-year in February. For its part Turkey continues to have problems in controlling its inflation and its current deficit is still high. And although it is going to benefit from faster growth in the coming months, largely thanks to cheaper oil, it is still vulnerable to investors' reactions to the Fed's interest rate hike and conflict in the region. Given this situation, the Turkish economy grew by 2.6% in 2014 Q4, more than the previous quarter (1.9%) but bringing annual growth for 2014 at 2.9%, lower than the figure of 4.2% achieved in 2013. 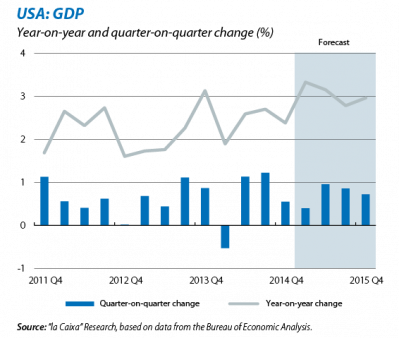 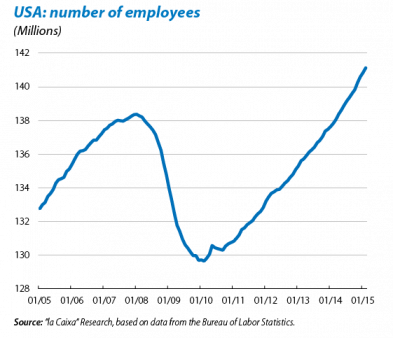 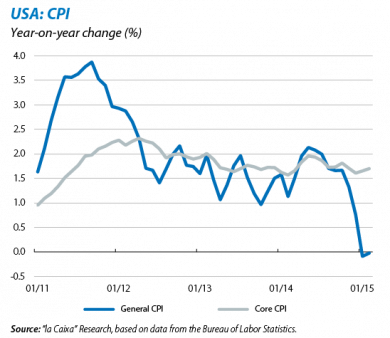 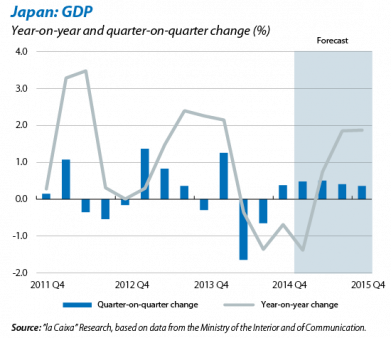 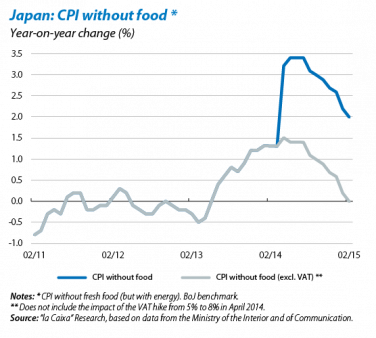 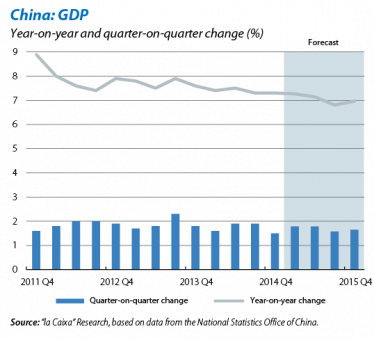 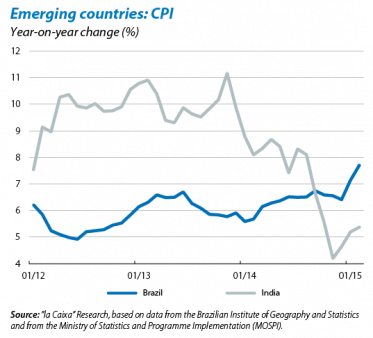 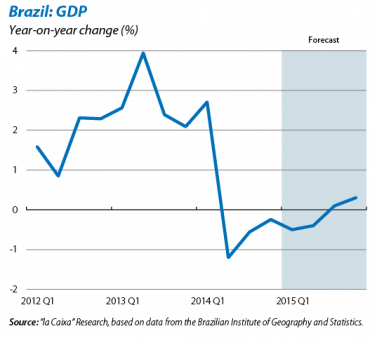