Financial instability and the business cycle

The financial crisis represented a watershed in prevailing macroeconomic thought. For many years the analysis of economic fluctuations ignored the financial system. Logically, the financial crisis changed that. Now, almost 10 years after the start of the crisis, the time has come to examine the current cycle. Have we learned from the errors of the past or are we sowing the seeds of the next financial crisis? By way of a summary, this article shows that the severity of financial crises is related to rote of growth of credit, particularly that of mortgages, preceding such crises. We will focus on presenting new, recently published empirical evidence rather than discussing the mechanisms that might lead to financial instability. We also show that, although credit does not appear to have reached an alarming level in most developed economies, it could be a problem in some emerging countries.

Assessing the robustness of the financial sector throughout the business cycle and how this might affect the economy as a whole could require monitoring a large number of variables. However, the economist Borio1 suggests this interrelationship is essentially reflected in the cyclical behaviour of bank lending to the non-financial private sector (credit, henceforth) and house prices. On the one hand, Borio shows that financial crises tend to be preceded by periods of strong growth in credit and property prices. On the other hand, Jordà, Schularick and Taylor, based on data from 17 advanced economies between 1870 and 2013, show that economic and financial crises preceded by above-average growth in credit tend to be longer and more severe than those preceded by below-average growth.2

But not all types of credit seem to affect the business cycle in the same way. The central role played by mortgages in the financial system after the Second World War (WWII) has, in turn, altered their impact on the business cycle.3 First, there is evidence to suggest that mortgage booms may be a source of financial instability. This can be inferred, for instance, from the fact that the dynamics of mortgage credit have gone from being a relatively poor predictor of a financial crisis in the pre-WWII period to being a good indicator in the post-WWII sample.4 Second, mortgage booms, in these cases that have been followed by an economic recession, have had much more severe economic consequences than those preceded by booms in other types of credit (see the first chart).5

Nevertheless, this last conclusion needs to be qualified. Although empirical evidence suggests that mortgage lending could be a source of financial instability, the risk entailed by this type of credit depends crucially on the regulatory and institutional framework of a country’s financial sector. According to the IMF, the degree and quality of financial regulation and supervision and less dependency on foreign-currency-denominated loans are, among others, key factors in mortgage lending having a positive effect on economic growth.6

At this point, however, we must ask whether, in the current expansionary phase spreading throughout the world, the errors of the past are once again being committed. In this discussion, we focus on the trend in credit and property prices (which has a high correlation with mortgage lending, see Borio1). The second chart plots the percentage point difference relative to the 2005 value of the ratio of bank lending to the non-financial private sector to GDP of the main advanced economies, other developed economies, emerging economies and emerging economies excluding China (on the left) and growth in property prices (on the right).

The chart illustrates that, after a period of consolidation resulting from the financial crisis, the leverage ratio in the main advanced economies picked up slightly in 2016, although the level is still clearly below the peak observed just before the crisis. Regarding property prices, although these have tended to rise since 2013, they are still below their pre-crisis level. This is not the case for the other developed countries, however. These countries were not so hard hit by the financial crisis, limiting their deleveraging. In some cases their economies have also been boosted by the ultra-accommodative monetary conditions provided by the policies of the main central banks, such as the Fed and the ECB, or in other cases by the slump in oil prices and other commodities. In these countries, both leverage ratios and property prices are high. Finally, China stands out among the group of emerging economies. If we exclude China from the group, we can see that, in the last year, both the leverage ratio and property prices have started to moderate their growth, largely due to the economic crises in Brazil and Russia. However, if we include China, we can see that credit has soared.7

Nevertheless, a longer-term perspective raises concerns, even among those countries that have deleveraged as a result of the crisis. The IMF notes that, in a context of accommodative monetary policies and improved macroeconomic figures, lower volatility in the financial markets and compressed interest rates could intensify the expansionary cycle of credit.8

In short, all the indicators we have reviewed in this article suggest that financial system risks seem to have gravitated from the main developed economies towards those countries that were not in the epicentre of the financial crisis, particularly China. Nevertheless, due to the extensive integration of the world’s financial systems, this represents a global risk. Given the how damaging financial crises can be, we should seize the opportunity provided by today’s favourable macroeconomic conditions to implement policies that increase the financial system’s resilience.

3. According to the database of Jordà et al., mortgage lending has gone from representing around 40% of the total credit to GDP ratio between 1870 and 1940 to 56% between 2000 and 2013. This is partly due to a higher proportion of households owning their own home. There are several reasons behind this phenomenon, including changes in the tax treatment of house purchases and in bank capital requirements for mortgage loans.

5. This last point is similar to the conclusion reached by Jordà et al. (2015) in their article «Leveraged Bubbles». There the authors show that the bursting of the financial bubble results in a much more virulent crisis if this bubble was accompanied by a credit boom. The authors also show that the most severe crises have been those following the bursting of a real estate bubble financed by a mortgage lending boom. 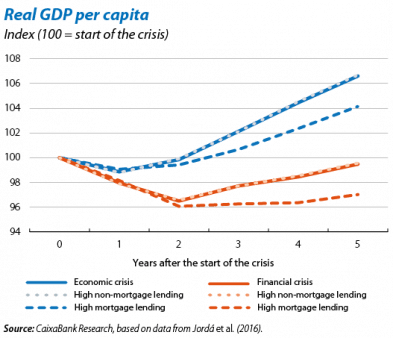