In barely three decades, flows of foreign direct investment (FDI) have gone from being almost exclusively the terrain of advanced economies to being increasingly important for emerging countries. And no longer as mere destinations of these flows (accounting for 50% of the inflows in 2012) but also, and increasingly so, as direct investors in European, US, Japanese and Australian assets. So what has changed?

One of the factors pushing FDI flows towards emerging economies has been the worldwide progress in intellectual property rights, spurred on by the international agreement known as TRIPS (Trade Related Aspects of Intellectual Property Rights). Similar to the unique patent act in England in 1624 which paved the way for the industrial revolution, this agreement, signed in 1995 and consummated in 2006 under the World Trade Organization (WTO) umbrella, changed the rules of the game in the international investment arena. Its impact comes from reducing the risk incurred by investing companies of ideas being appropriated or imitated. That is especially true when cutting edge firms in innovation and technology set up in countries with a less developed institutional framework .(1)

Another change of a regulatory-institutional nature that has pushed FDI towards the emerging world was China joining the WTO as a full member in 2001. The commitments it acquired accelerated the liberalization of its economy, including a substantial reduction in customs duties (on average from 16.4% to 7.8%). Given the growing importance of international trade in intermediate goods, the fewer trade barriers a country has, the more attractive it is for a company that is thinking about moving some of its production chain there, such as via FDI.

Undoubtedly, lower production costs and easier regulatory conditions in emerging countries, especially in the environmental and fiscal area, are also attractive for foreign multinationals, mostly companies looking for cost efficiency to survive in an increasingly competitive global market. In contrast, the greater dynamism of emerging markets has also seduced another type of FDI whose aim is to widen or diversify markets. This dynamism is particularly appealing for sectors aimed at domestic consumption: by way of example, in the food and beverage industry, 72% (in value) of the international mergers and acquisitions in 2012 were aimed at emerging countries, with a notable rise in India and Russia.(2)

Nevertheless, the differential in this new FDI pattern lies in the investment coming from the emerging countries themselves: their position currently accounts for around 30% of total FDI outflows while it was below 10% at the beginning of the 1990s. Most of this emerging FDI comes from the BRIC countries, with China (4.5% of the world's total FDI outflows in 2012) and Russia (3.5% of the global total) in the lead, and is aimed at advanced destinations (in academic terms called South-North flows), mainly the EU and, to a lesser extent, the USA. South-South flows are also growing significantly, to the extent that 50% of the FDI stock in the hands of the BRIC is located in other emerging countries.

Where has this investing boom come from? The economic growth of the emerging countries has not only made them more attractive to foreign companies but has also spurred on foreign investment by these emerging countries themselves. It is no wonder that their growth models have been supported by strategies biased towards exports, leading to bulging current account surpluses. These surpluses (ultimately emerging savings) have been largely channelled towards FDI. In the case of China this was also a strategic choice: 1999 saw the launch of the «Going Out» initiative whose explicit aim was to boost China's investment position abroad in the form of FDI. Since then, the outward flows of Chinese FDI have multiplied by 12, up to almost 65 billion dollars in 2012.

Regarding South-North flows, the main aim is to diversify or extend markets and this is usually achieved via acquisitions rather than organic investment (greenfield). In addition to consolidated markets, the north's other attractive features for southern companies is access to well-established brands (such as in the case of Tata with Jaguar) and easier financing conditions. According to a recent study by the World Bank, two thirds of the firms from emerging countries that had carried out international mergers or acquisitions resorted to some kind of foreign financing (such as a syndicated loan or foreign currency debt).

With regard to emerging-emerging FDI, this has been encouraged by the increasingly fragmented global value chain and the resulting boost to trade in intermediate goods. Minimizing transport costs (in terms of both money and time) tends to locate FDI related to this fragmentation in the same region. This would explain, for example, why 70% of the stock of Chinese FDI can be found in those countries that make up the country's value chain in South-East Asia. Another determining factor of South-South flows is the search for access to raw materials. Recent studies conclude that the most attractive characteristic of advanced economies for Chinese FDI is market size but that, in other emerging countries, it is the combination of lax institutions and abundant natural resources.

Nonetheless, most of the FDI from emerging countries is concentrated in the services industry (at a global level, 60% of the stock is in services; 34% in manufacturing and 7% in raw materials) and this concentration is even stronger, if possible, in the case of China, where services account for close to 78% of its external position in FDI and raw materials 19%, with little representation in manufacturing (in which China ultimately continues to have a clear competitive edge). This dominance of services can be attributed to their non-exportable nature: a manufacturing firm can access foreign markets via exports but, in services, such access often entails carrying out FDI (such as in supplies).

In short, the emerging countries have significantly contributed to the supersonic success of FDI in the last ten years. Their share is still small but the large trends suggest this shift will continue: the world is not upside-down... «eppur si muove» (and yet it moves).

(1) Branstetter et al. (2006) estimate that a qualitative improvement in protecting these rights leads to a 30% rise in royalty payments by subsidiaries in emerging countries to their parent company in the USA, indicative of greater investment in these subsidiaries. 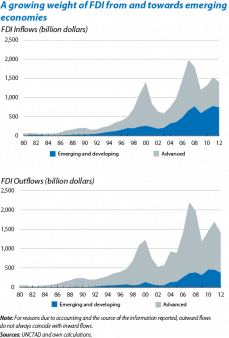 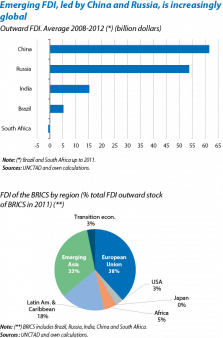