Hungary: a recovery that is running out of steam

After contracting by 1.7% in 2012, the Hungarian economy grew by 1.2% in 2013 and this recovery in activity continued in Q1 this year, when growth reached 3.2% year-on-year. However, this figure must not be extrapolated as GDP is expected to grow more slowly in the coming quarters, resulting in a gentle economic expansion with growth of around 2% in 2014 and 2015. This trajectory will leave Hungary lagging behind its neighbours in the region, which are progressively looking more dynamic. Should the forecasts be accurate, in 2015 the Czech Republic will grow by 2.5%, Slovakia and Romania close to 3% and Poland by 3.5%. So why has the Hungarian recovery, which had barely started, run out of steam so quickly?

The essential problem for Hungary is that its recovery critically depends on two factors: stimulus from fiscal policy (to a large extent based on increased public investment, co-financed by the European Union) and from monetary policy (by lowering interest rates and injecting liquidity) and the recovery in exports (especially automobiles). On the other hand, domestic demand, and especially private investment, will remain subdued. In short, there is a worrying absence of private domestic drive. This situation should come as no surprise, seeing as Hungary has been suffering from a heterodox economic policy that has damaged the perception of investors and business people regarding the quality of the country's environment to do business.

In fact, since 2010 Hungary has adopted an economic policy that is, to say the least, questionable. With the aim of short-term growth and reducing its fiscal deficit, it has prioritised exceptional measures that will therefore not be repeated or sustainable over time, very often erring on the side of populist. Among others, it was decided to tax sectors with an extensive proportion of foreign ownership, such as banks and retail chains, while financial institutions were forced to exchange loans in currencies other than the Hungarian forint at favourable rates for the debtors and part of the private pension system was also renationalised.

In spite of many warnings, particularly from international organisations, regarding the limitations and ill-advisedness of this type of practice, there are no signs of change on the horizon. The outcome of the legislative elections last April, which allowed the government to remain in power with ample parliamentary majority, also endorsed the electoral success of these populist measures and the prospect that economic policy will remain unchanged and not become less unorthodox. Some of the proposals announced are indeed along these lines: the aim to bring 50% of banks under Hungarian ownership and the state's intervention in the energy industry. Given this situation, atypical compared with the lines followed by the economic policy of advanced countries, the country has fortunately kept a tight rein on its budget, partly because this is an unavoidable requirement to guarantee European financing of public investment, one of the
few internal pillars of growth.

However, in the medium and long term it will not be possible to improve potential growth if the country does not restore a business-friendly regulatory framework and orthodox economic policy. And it is quickly losing competitiveness. Between 2009 and 2014, the World Bank's Doing Business indicator, which reflects the ease of doing business in different countries, shows that Hungary has dropped 13 places in the ranking, going from the 41st best country for business to 54th. A worrying trend that endorses the economy's loss of international appeal and reflects the toll being paid by business in the country. Without a significant boost from the private sector, this situation (remember: Hungary is moving away from its neighbours' rate of growth) could even become more the rule than the exception in 2015. 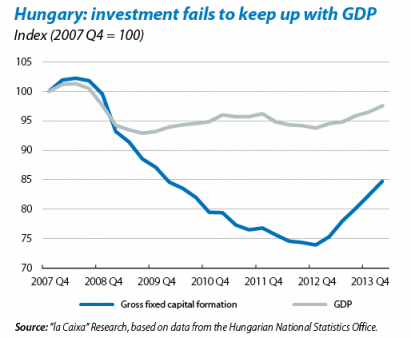 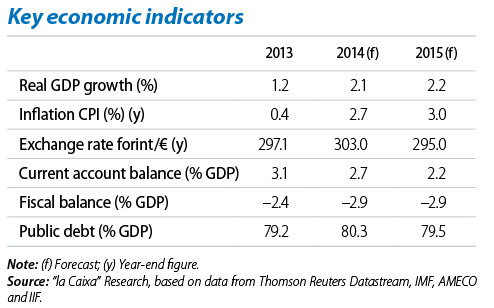