Intangibles: the new investment in the knowledge era

The shift from a broadly manufacturing economy to what is now being called a knowledge economy has involved significant changes in the productive structure of countries. Intangible assets are becoming so important in the era of digitalisation and communication that we could even say they are to the knowledge economy what machines were to the manufacturing economy. However, in spite of their growing relevance (as can be seen in the graph, the US and UK already invest more in intangible than tangible capital), the difficulty in measuring such assets has often led to them being excluded from numerous economic contexts, resulting in flawed theories and poor decision-making. This article analyses what intangibles are, why they are difficult to quantify and what happens when they are excluded.

Economic theory defines investment as what is spent today on goods and/or services (assets) to increase the stock of capital and thereby future output. The variable of stock reflects changes caused by investment decisions but has a large inertia as it contains capital accumulated in the past, after depreciation. According to this premise, intangible assets are types of capital that, by their very nature, are difficult to identify and count but whose accumulation (as happens with the more common or physical capital goods) leads to greater output in the future.

For example, when a firm decides to acquire a new machine it makes an investment. This machine then becomes part of the company's capital stock and therefore its production capacity. When the same firm gives its workers training or buys a software package (both intangible assets), this is also an investment. However, spending on specific training for workers is not treated as investment by national accounts, so companies have to account for it as an expense and cannot capitalize the expenditure. Although this might come as a surprise, it is worth noting that, just 15 years ago, national accounts did not even consider the buying of software to be an investment and this was therefore not taken into account when calculating countries' capital stock. It is even more surprising to note that the amount that individuals decide to spend on their education and training (i.e. investment in human capital) is not considered to be an investment either. This surely means that countries' capital stock is underestimated: back in 1989, Dale Jorgenson and Barbara Fraumeni estimated that US economy's stock of human capital was between five and ten times higher than the physical figure.1

Intangible assets can be divided into four broad groups: (i) computerised information (ii) intellectual property (iii) human capital and (iv) economic competencies. Of the four, and as we have already mentioned, computerised information (essentially software) has been considered as investment in national accounts for some years now, while intellectual property (patents, copyright and R&D expenditure) has now become part of investment precisely with the current methodological change for calculating GDP (see the article «On measuring and using GDP» in this Dossier). So an effort is clearly being made to improve the accounting and classification of this kind of capital although there is still a long way to go, particularly regarding economic competencies. These assets, often also called organisational capital, include a wide range of elements within productive processes, business models, investment in firm-specific human capital and also brand-related elements (such as advertising campaigns and market surveys). They also appear to be extensive, judging by the different calculations made. By way of example, and according to Corrado et al. (2007), at the beginning of the year 2000, US investment in intangible assets was around a trillion dollars a year (on a par with investment in tangible assets), of which half (half a trillion!) comes from intangibles related to economic competencies.2 This means that, at present, half the investment in intangible assets is still being ignored by national accounts.

Although this is investment by definition, there are considerable reasons for not including (or for such a delay in the inclusion) of intangible expenditure under this heading, particularly the fact that many of these intangible assets are not bought but developed by the company itself and it is therefore difficult to quantify their market value. Secondly, these assets tend to be «invisible» in nature, making it harder to calculate their degree of depreciation, a basic feature for any kind of capital. The fact that a machine is visible means that we can see whether it is new, old or not working. However, when is a productive process new, old or not working?

Nonetheless, and in spite of the task's complexity, in this case John Maynard Keynes's maxim should come into play, namely that «it is better to be roughly right than precisely wrong». Because excluding these intangibles as a form of investment can lead to serious errors in economic policy, both at a global and also at a company level. In particular, in accounting models of economic growth, used to estimate the factors determining labour productivity, the inclusion of intangible assets significantly alters the results, especially as follows: it reveals that intangible capital has been an important and growing source of the improvement seen in labour productivity over the last few decades and that, consequently, the importance of tangible capital and the total productivity of factors was overestimated.3 Policies based on estimates that ignore the role of intangibles will have certainly led to overinvestment in tangible capital in detriment of intangible, among other unwelcome effects.

At a company level, it is evident that treating a lot of the intangible assets as expenditure instead of investment leads to underinvestment in intangibles since managers have to weigh up future profits with the current income statement and bear in mind the risks involved in high expenditure in intangibles (as this cannot be capitalised). Similarly, and as would be the case with studies at a macroeconomic level, omitting intangibles from microeconomic studies also leads to considerable error. For example, a study by Brynjolfsson, Hitt and Yang (2002) shows, in an initial estimate, how a dollar invested in technological capital becomes ten dollars in terms of its market value, while this ratio is one to one when the investment is allocated to non-technological capital.4 However, the results change dramatically when an organisational capital measure is included. Specifically, while this ratio of one to ten remains for investment in technological capital in an organisational environment that prioritises self-managed teams and decentralised decision-making, this relationship becomes one to one when the organisational context does not encourage self-management or decentralisation. In other words, investment in technology is highly productive only if accompanied by suitable organisational changes.

It therefore seems clear that, although it may be imperfect, some kind of measure needs to be found for intangible assets and there are different approaches to this problem. One of the most common uses the market-to-book ratio of companies; i.e. comparing their market value with their tangible book value: the difference between both figures reflecting the importance of intangibles in such firms. It does not take much insight to realise that the real value of Google or Amazon has little to do with the value of their tangible assets but a lot to do with their intangible capital, although it is also true that market value can fluctuate considerably for different reasons, especially over the short term.

A second approach consists of grouping together the different types of expenditure that are logically associated with the creation of intangibles then capitalising these in the same way as we would do with more traditional assets. In general, the items used are expenditure on advertising, direct spending on worker training, expenses incurred in outsourcing to consultancy firms and a portion of senior management salaries since part of their time is considered to be spent on organisational innovation. Once these investment flows have been compiled with a certain degree of regularity, a rate of depreciation is assumed for each one. As has already been suggested this task is not entirely straightforward but an attempt is made to base this on the information available regarding the company's economic situation. While depreciation rates of between 5% and 15% are assumed for the more traditional physical assets, these rise to 25% for R&D and shoot up to between 30% and 55% for some IT products, as well as organisational capital.

In short, although investment may be a concept that is easy to define, its identification and quantification becomes an arduous task as economies advance towards the era of digitalisation and knowledge and intangibles become one of the key sources of wealth. Nevertheless this complexity should not act as a deterrent because, if we can only manage to identify and measure such intangibles, we can help companies in today's world to generate the competitive edge that will lead them to the best possible use of resources and thereby success.

3. The total output of factors is the difference between a country's rate of growth in output and the weighted rate of increase in production factors (in general capital and labour). 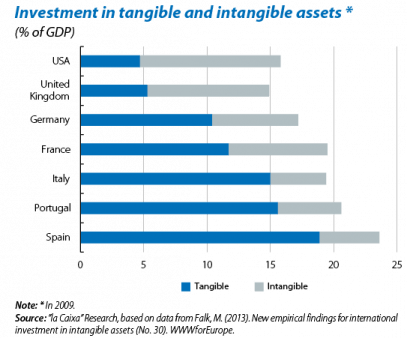