The package will be useful in supporting those businesses and self-employed people that have been hardest hit by the pandemic. However, the aid must reach them quickly as it is precisely now, before the economy recovers, when our productive fabric needs a boost. 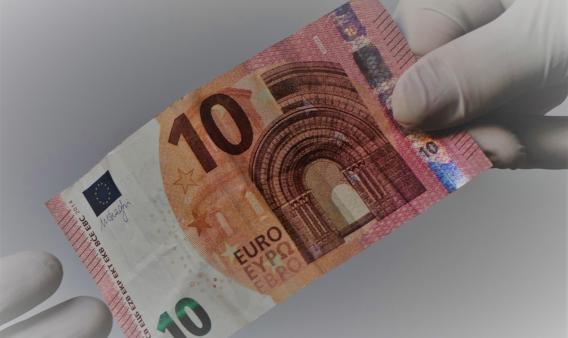 Description of the main measures

The aid package approved by the Spanish government on 12 March consists of three funds. The largest of them, with a budget of 7 billion euros, is intended to provide direct aid to businesses and self-employed workers in order to help those experiencing liquidity problems that could turn into solvency problems. To access the aid, firms will have to demonstrate declines in revenue of more than 30% in 2020, a condition similar to those applied in Germany and France in their aid packages, as well as demonstrating that they had not incurred losses in 2019, two easily verifiable conditions. They must also be up to date with their tax and social security payment obligations, they must continue to undertake the activity for which the aid is granted until at least 30 June 2022 and no dividends may be distributed in 2021 or 2022. It should be noted that the aid will be granted for specific purposes, namely to pay suppliers, utilities, wages, rents and leases or financial debt. Firstly, they will be used to pay suppliers (in order of age) and then, where applicable, to repay guaranteed debt followed by non-guaranteed debt.

These aids will be managed by the Autonomous Community regions and, of the total amount, 2 billion euros will go to the Canary Islands and Balearic Islands and 5 billion to the rest. Specifically, this sum of 5 billion will be distributed among the various Autonomous Communities following the same criteria applied to allocate the funds from the REACT-EU programme1 (see the attached chart with the allocation of direct aid by region) and they will receive the funds by the end of April. Finally, the aid available to self-employed workers who declare their taxes under the objective estimation scheme has been set at 3,000 euros; micro-enterprises and all other self-employed workers will be eligible to receive up to 40% of their loss in turnover in excess of the 30% drop;2 and all other firms will be able to receive aid of up to 20% of their loss in turnover in excess of the aforementioned 30% (with a minimum of 4,000 euros and a maximum of 200,000 euros).3 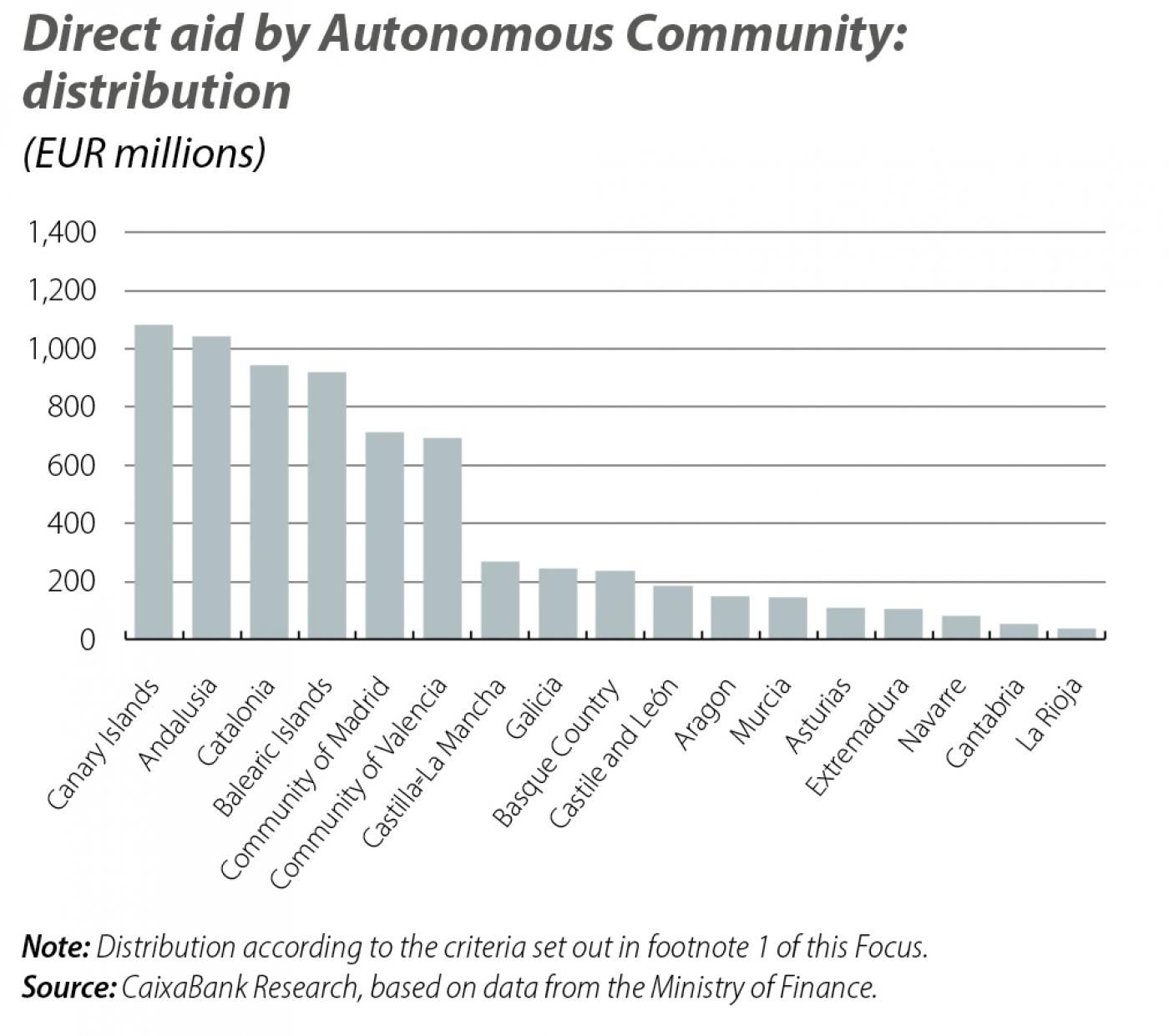 The second fund has a budget of 3 billion euros, it will be used to restructure loans under the government-backed ICO scheme and it will be applicable to those loans granted between 17 March 2020 and 13 March 2021. Three levels of measures will be considered, in the following order of priority: i) extension of the loan maturity beyond the term foreseen in the November decree4 (in this case, the guarantee will also be extended); ii) where this is insufficient, conversion into a participatory loan,5 maintaining the coverage of the guarantee, and iii) as a last resort, the Ministry of Economy will make specific transfers – to be received by financial institutions – to reduce the principal of ICO loans within any debt renegotiation agreements that are reached between debtors and financial institutions. Financial institutions will also assume a reduction in the outstanding capital due to be repaid.

The Council of Ministers will soon establish the applicable conditions and the requirements that must be met in order to qualify for these measures. A Code of Best Practice will also be adopted to facilitate and coordinate the use of these funds for restructuring secured loans.

Finally, a recapitalisation fund for medium-sized enterprises (1 billion euros) will be created to strengthen the solvency of these businesses, after assessing their viability, through different forms of debt, capital and quasi-capital instruments. In the event that capital instruments are used, the state will exercise its voting rights (and will be entitled to a share of future profits) for a maximum term of eight years. This fund will be managed by Cofides, a body attached to the Ministry of Industry, Trade and Tourism.

The overall assessment of the support package for businesses and self-employed workers is positive. The set of measures boosts the aid that is available to those self-employed workers and firms that have been hardest hit by the pandemic. They come in addition to those already implemented in 2020 (furlough schemes, ICO guarantee lines and tax payment deferrals) and will help alleviate the liquidity and solvency problems that the businesses most affected by the pandemic are experiencing. It is also encouraging to note that the direct aid is targeted and will focus on covering fixed costs or reducing debt, as this makes it easier for the aid to reach the businesses that need it the most.

The direct aid is also limited to 95 of the 538 sectors that comprise the official CNAE classification of economic activities. The aim is to focus on the sectors that have resorted most to the use of ERTE furlough schemes the most, as a way to identify those hardest hit by the crisis and thus prioritise the sectors with the most jobs at stake. That said, this approach could lead to other viable businesses that are also suffering greatly being excluded from the aid, such as businesses which fall outside the 95 sectors selected but are located in tourist areas. On the other hand, by setting relatively low limits (200,000 euros in mainland Spain), the aid will be more effective for self-employed workers and very small enterprises, and less so for medium-sized enterprises.

One of the big questions is how to distinguish in the current context between viable businesses (to which the aid should be addressed) and non-viable businesses. However, in the context of a pandemic like the present, it seems preferable to cast the net too wide rather than too narrow. Another positive element of the package of measures is that the requirements established for accessing the funds are easily verifiable and are geared towards benefiting businesses that are truly viable: they must have made a profit in 2019, continue to operate until June 2022, be up to date with their tax and social security obligations, not have applied for voluntary administration, not have been declared insolvent in any proceeding and not be in receivership. The restrictions on dividend payments and increases in executive remuneration are also ways of limiting the aid to those businesses that need it the most.

With regard to the fund for the restructuring of secured loans, it is positive that the decree enables the ICO to undertake restructuring operations and that the proposals should be made by financial institutions. The fund for the recapitalisation of medium-sized enterprises, meanwhile, could prove useful in certain cases (firms that need more resources in addition to the other two funds and can demonstrate that they are viable in the medium term).

Finally, the extension of the insolvency moratorium until the end of the year will provide an important lifeline for businesses and self-employed workers so that they can take advantage of the economic recovery anticipated for the second half of the year in order to normalise their income statement. This will be accompanied by the necessary modernisation and European approval of Spain’s receivership law in order to solve its two chronic problems: the low number of proceedings and the fact that the vast majority of them (90%) end up in liquidation.

In short, this package will be a useful tool in helping the businesses that have been hardest hit by the pandemic. However, it will be essential that the aid reaches businesses and self-employed workers quickly, as it is precisely now, before the economy takes off, that we must boost the oxygen supply to the productive fabric of our economy. It would also be desirable to constantly monitor the volume of the funds in order to recalibrate them, if necessary, in light of how the pandemic, and thus the economy, develops over the coming months. 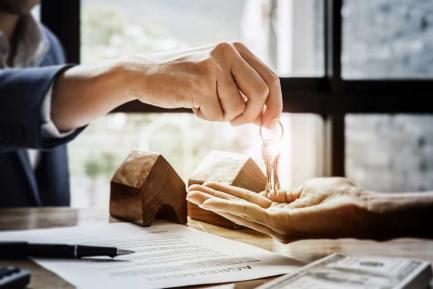