Oil: stability has a price

The resurgence of conflict in Iraq has set off alarm bells in the international oil market. The possibility of military escalation in the heart of such a critical region as the Middle East has led to fears of another episode of tensions for crude. And rightly so: Iraq is the world's eighth largest producer of petroleum (3.4% of global production) and provided most of the increase in OPEC's crude production between 2008 and 2013. However, it is also true that, over the same period, the increase in oil extracted in the US and Canada was five times greater than in Iraq. Perhaps for this reason the Brent's rise from 108 to 114 dollars in the third week of July could be considered moderate compared with the spectacular upswings occurring in past conflicts. Although the Iraqi conflict may cause oil prices to fluctuate for the remainder of 2014, the underlying trend points to a relatively calm evolution over the coming years. This does not mean we expect cheap petroleum: Brent is still close to its all-time high, both in nominal and real terms, and will stay there. In other words, we expect oil to still be expensive but without any huge fluctuations. The reasons for this stability, unprecedented in the last few decades, lie in the changes occurring both in supply and demand. On the supply side, the last few years new oil fields have appeared outside the scope of OPEC while the transformations occurring in China and India, both heavy consumers of energy, are key to demand, particularly their increasing use of other sources of energy such as hydroelectricity and natural gas.

The technical viability of extracting oil from alternative sites to those in the Middle East means that reserves are growing faster than consumption. Whereas the world's consumption of oil rose by 17% between 2000 and 2012, reserves grew by more than 60% (consumption accounted for 7.6% of global reserves in 2002 but just 5.9% in 2012). However, this increase in reserves has not brought down the price of Brent, as the average in 2013 was three times greater than in 2000 (deflated by the US GDP deflator). Why? Because, in order to extract petroleum from these new sites, expensive and contaminating techniques have to be used such as fracking, which obtains petroleum and gas trapped within layers of shale in the subsoil. This high extraction cost compared with traditional methods means that it is only profitable to exploit such sites if oil is expensive. Should prices fall, extraction is no longer worthwhile and supply shrinks, giving oil a relatively high floor price. But when oil prices rise, extraction becomes profitable. Consequently, supply increases and this places a ceiling on prices.

The geographical diversity of the sites also helps to contain prices as it reduces geopolitical risk. The US and Canada are the prime example of this greater supply. Thanks to fracking, the two countries increased their crude production from 11.9 million barrels a day in 2008 to 16.4 million in 2013. These figures are extremely significant. On the one hand, this means that the US and Canada already provide 18.2% of the world's production in absolute terms; on the other, they contributed 80% to the growth in the world's supply over the same period. This makes them increasingly important as regulators of the international price of crude, a role which, until very recently, was reserved for Saudi Arabia (11.6 million barrels a day in 2013). Proof of this greater North American flexibility is the historically upward trend in the percentage of crude consumption covered by imports, which has been downward since 2008.

The patterns in global demand also point to stable oil prices. The factor affecting global demand for crude the most over the last decade has been the emergence of China and India (Chindia) as heavy consumers of energy due to their rapid economic growth. It is estimated that Chindia will contribute 60% to the increase in the world's consumption of petroleum between 2010 and 2020. Chindia's influence is not new: it has been a big net importer of oil for years and the explosive acceleration in its share of imports in relation to the world total since 2004 has occurred in parallel with the rises in oil prices between that year and 2011 (the exception is 2009, a time of deep crisis in international trade due to the Great Recession). This points to a strong link between Chindia's demand for oil imports and crude prices.

However, the changes being observed in Chindia's energy structure augur a calm evolution in crude prices thanks to a very powerful phenomenon: between 2010 and 2020 these countries' use of natural gas (requiring less investment to extract) and hydroelectric and nuclear energy (benefitting from technological advances in battery life and less environmental impact) will grow more than their consumption of oil. Admittedly, the reduction in the relative share of coal (a particularly dirty source of energy) from 65% of Chindia's energy needs in 2010 to 60% in 2020 will be partly covered by oil but the first effect is stronger than the second, so that the share of petroleum fuels will shrink (from 20.6% to  19.3% of the total) at the same time as an increase in natural gas (from 4.9% to 5.6%) and especially hydroelectric and nuclear energy (from 9% to 15%). These figures may seem modest but, in terms of implicit growth rates, they can lead to huge variations in the energy scenario.

In fact, these patterns of transformation in Chindia's energy structure will also be observed at a global level; to a lesser extent, certainly, but enough to support the scenario of relatively stable crude prices. Another contributing factor will be slower economic growth in the US and especially in Europe compared with that of the emerging economies. The US and Western Europe tend to use oil to meet their energy needs to a greater extent than in Asia (39% and 37% for the US and Western Europe in 2010 compared with 25%). Consequently, this relatively slower growth will mean that, on the whole, the demand for oil will rise more slowly than that for hydroelectric or nuclear energy and natural gas.

There are three key events that could upset our scenario of expensive but stable oil: one that would push prices up, the other pushing prices down and the third being somewhat ambiguous. Firstly, if tensions in the Middle East end up destabilising Saudi Arabia, the effect on supply would magnify and oil would become significantly more expensive. Secondly, although China has to import half the oil it consumes, if its on- and offshore extraction projects manage to increase production considerably, we might see crude coming down in price. And thirdly, albeit to a lesser extent, cyclical aspects such as a less gentle slowdown in the Chinese economy than expected or, on the other hand, an acceleration in activity in the advanced economies could also affect oil prices. 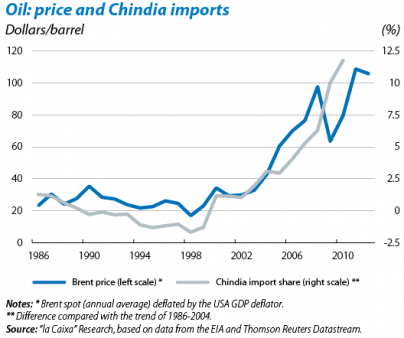