The outlook for the euro area remains positive, despite a less dynamic start to the year

The latest global economic indicators point to a positive growth outlook for the remainder of 2018. The global composite business sentiment index (PMI) clearly remains in expansionary territory and in May, it increased slightly to 54.0 points. In addition, CaixaBank Research’s indicator that estimates global growth suggests that in Q2 2018, the global economy will have grown at a very similar rate to that of previous quarters (see Focus «Drivers of global growth: a comprehensive analysis» in this Monthly Report). Indeed, the latest global data support the hypothesis that global growth remains solid, supported by high sentiment and confidence indicators, accommodative financial conditions and contained commodity prices, for both exporters and importers.

Downside risks, however, are rising. The positive dynamic in global activity coexists with significant risks related to trade and in the macrofinancial sphere. In particular, after weeks of negotiations with China, the US announced a tariff increase on Chinese imports (of around 50 billion dollars), arguing that it would reduce its hefty trade deficit with the Asian country. Moreover, the announcement provoked an escalation of declarations from both sides, with China threatening to introduce an equivalent increase in tariffs, and Trump threatening (via Twitter) to increase tariffs to 200 billion dollars. In addition, the US introduced tariffs on imports of steel and aluminium from the EU, Mexico and Canada, and Europe responded with an increase in tariffs on US imports of 3.3 billion dollars. Although all these actions only affect 1.5% of total trade flows of goods, they generate uncertainty, which could dent confidence and, therefore, global growth. On the other hand, in the macrofinancial sphere, outflows of capital from emerging markets in May highlight concerns regarding their resilience in a less accommodative financial environment. Finally, June was also marked by the European political agenda. At the European Council meeting, a common plan for managing the EU immigration crisis was agreed, which will involve greater cooperation with origin and transit countries and measures to limit the movement of immigrants within the EU. However, there were no significant changes on other fronts towards greater European integration.

The outlook for the euro area remains positive, despite a less dynamic start to the year. The slowdown in euro area growth in Q1 was due to temporary factors (adverse weather conditions, strikes and flu episodes) and a return to more moderate rates of growth following an exceptionally positive 2017. Over the next few quarters, the economic expansion in the euro area will remain solid, with higher-than-potential growth rates, supported by very favourable financial conditions, a healthy labour market and the dynamism of global economic activity. This was the outlook reflected by the ECB in its latest macroeconomic projections quarterly update, in which it revised its growth forecasts for the euro area for 2018 down by –0.3 pp to 2.1%, but maintained its forecast for 2019 at 1.9% (a scenario that is very similar to CaixaBank Research’s).

Domestic demand remained the main driver of growth in Q1. The breakdown of the euro area’s GDP shows that Q1 growth (2.5%) was driven by a 1.9 pp contribution from domestic demand (1.6 pps in Q4 2017), supported by positive trends in both private consumption and investment. On the other hand, the contribution from external demand fell to 0.6 pps (1.3 pps in Q4), largely due to lower growth of exports of goods and services (which grew by 4.5% year-on-year, 2.1 pps less than in the previous quarter).

Economic activity indicators remain high and point towards solid growth in Q2. Specifically, the composite PMI index increased in June to 54.8 points, 7 decimal points above May’s figure and well within expansionary territory (above 50 points). Likewise, business confidence remains high. In particular, the Economic Sentiment Index (ESI) stood at 112.3 points in June, compared to an average of 110.7 in 2017. Meanwhile, retail sales rose by 1.7% year-on-year in April, 3 decimal points above the figure for the previous month. Similarly, consumer confidence is well above the2017 average (–2.5 points), despite dropping to –0.5 points in June (0.2 in May), which suggests that private consumption will remain a key factor for euro area growth.

Inflation continues to rise and stood at 2.0% in June, 1 decimal point above the figure for the previous month, due to the higher growth of the energy component (8.0% year-on-year, compared with 6.1% in May). Meanwhile, core inflation dropped slightly to 1.2%, 1 decimal point below May’s figure. On the other hand, hourly wages in the euro area grew by 1.8% year-on-year in Q1, 2 decimal points above Q4 2017 figure. Over the next few quarters, we anticipate that wages will rise at a more sustained pace, as the labour market enters into a more mature phase of the cycle. This, in turn, will help to gradually bring inflation closer to the ECB’s target rate (close to, but below, 2%).

The macroeconomic environment consolidates its strength. The final estimate of GDP for Q1 2018 confirmed a growth of 0.4% quarter-on-quarter and 2.1% year-on-year, bringing the number of consecutive quarters with growth above 2.0% in the Portuguese economy to seven. This positive trend is supported by the good tone of domestic demand and exports, which in Q1 contributed 2.3 and 2.2 pps to GDP growth, respectively (while the growth of imports deducted 2.6 pps and the accumulation of stocks contributed +0.3 pps). Furthermore, both factors will continue to firmly drive economic activity over the coming quarters. On the export side, these will continue to benefit from a favourable external environment, and they will also be enhanced by the resumption of fuel refining activities and the increase in car exports (after one of the major vehicle manufacturers announced an increase in production, starting in September). On the domestic demand side, the solid growth in private consumption (0.8% quarter-on-quarter and 2.1% year-on-year in Q1) is expected to continue, thanks to the recovery of the labour market, improving confidence among households and healthier household balance sheets (net household wealth reached a new peak in 2017 of 445% of disposable income, while household debt fell to 72.6% of GDP in Q1 2018). With regards to investment, various factors suggest that the slight slowdown seen in Q1 2018 (4.7% year-on-year, following a figure of 5.9% in Q4 2017) will be temporary. This slowdown was mainly due to investment in construction (which was affected by unfavourable meteorological factors in March), while the rest of the components performed strongly (machinery and equipment +9.2% year-on-year and transportation +11,7%). In addition, the various indicators for Q2, such as planning permission applications for new builds in the residential sector, suggest there is a renewed acceleration in investment. As such, all the indicators suggest that Portugal will maintain a solid rate of growth over the coming quarters, slightly above 2.0% according to our forecasts.

The labour market is growing healthily. So far this year, employment has grown at an average rate of 2.9% year-on-year (2.1% year-on-year in April, the latest figure available). The number of registered workers affiliated to Social Security also increased in April, by 134,618 (compared with the same month in the previous year). The employment rate, meanwhile, stood at 61.3%, close to its pre-crisis peak. Finally, it is important to note that the unemployment rate fell to 7.4% in April (–2.1 pps compared to April 2017), the lowest level since the beginning of 2004.

In May, inflation showed greater strength. According to the harmonised index of consumer prices (HICP), headline inflation stood at 1.4% in May. This represents a considerable acceleration compared to the figure recorded in April (0.3%), hoisted up by a 5.7% rise in energy prices and a 2.6% rise in the price of services. Core inflation also increased considerably, reaching 1.1%, 1 decimal point higher than the figure for April. As discussed in the Focus «What is behind Portugal’s low inflation?» in this same Monthly Report, in recent months inflation had slowed as a result of the relatively more moderate rise in oil prices and the impact of the appreciation of the euro. However, over the next few quarters, as these temporary effects fade, the core components will drag inflation upwards fuelled by the buoyancy of economic activity and the recovery of the labour market.

The external surplus continues to contribute to the improvement of the macroeconomic imbalances. In Q1 2018, the economy maintained a positive external funding capacity amounting to 1.2% of GDP. Of particular note was the improvement in the funding needs of the public sector, which reduced all the way down to 0.7% in Q1 2018, compared to 3.8% in Q1 2017. This improvement was largely due to the negative effect of the recapitalisation of Caixa Geral de Depósitos (CGD) in 2017. Meanwhile, the funding capacity of households and the funding needs of non-financial companies deteriorated very slightly. In this context, the household savings rate stood at 5.1% of disposable income, 0.2 pps below the figure for Q4 2017, due to consumption growing more than disposable income.

The public accounts are on the right track, despite some temporary impediments. The data from the national accounts show an improvement of the central government balance, going from –2.0% of GDP in Q1 2017 to –0.9% in Q1 2018 (excluding the recapitalisation of CGD). In addition, the contrast with the cash accounting data (which reflect a deterioration in the budget deficit up to May) is due to this variable being distorted by temporary factors, such as the earlier repayment of personal income taxes and a delay in the receipt of income from corporate tax. Therefore, the outlook for the year as a whole remains positive, especially thanks to the favourable economic environment and its particularly positive effect on indirect taxes and social contributions (which, up until May, together grew by 5% year-on-year).

The real estate sector is on the rise. In Q1 2018, the housing prices rose by 12.2% year-on-year, which represents an acceleration of 1.7 pps compared with Q4 2017, while the number of homes sold increased by 15.7%. By segment, sales continue to be dominated by existing homes, which represent approximately 86% of all transactions. By region, the data indicate that the buoyancy of the real estate market is spread throughout the country, although it is more pronounced in the metropolitan regions of Lisbon and Porto and in the Algarve. Looking forward to the next few quarters, the accommodative financial conditions and the significant demand for housing from non-residents will continue to support the strength of the real estate market. 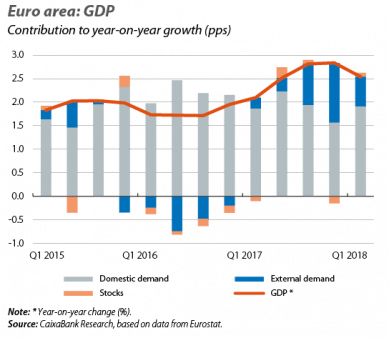 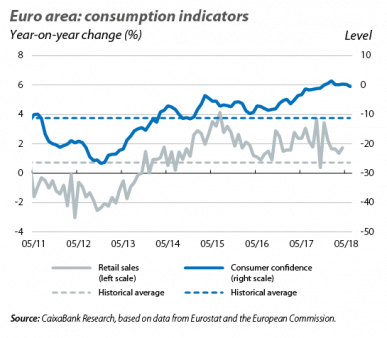 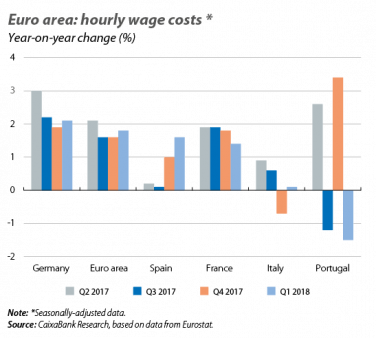 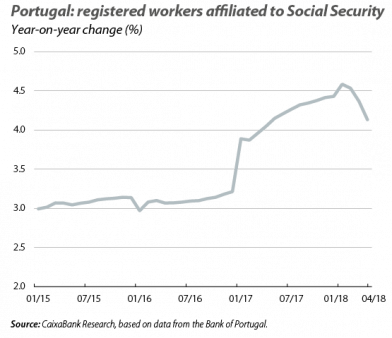