Portugal: macroprudential measures and the state of the housing credit cycle

• In Portugal, credit for the purchase of housing represents a significant portion of household debt, so in terms of financial stability, it is important to monitor its levels over time.

• Despite the significant recovery in new lending for the purchase of housing, the stock of this credit segment continues to contract due to early repayments.

• Looking ahead, the recovery in housing credit is likely to be gradual, with healthier lending criteria than in the past.

The financial system tends to be cyclical and the growth of credit tends to accompany and support the expansionary phases of the economy. For example, between 1995 and 2000 the Portuguese economy expanded at a rate of 4.0%, while total credit1 increased by 22.1% (annual averages). This relationship also occurs in reverse order, that is, the contraction of the economy is usually both accompanied and accentuated by the decline in credit. This is what occurred during the sovereign debt crisis, when the Portuguese economy shrank at a rate of 2.3%, while credit fell by 4.8% (annual averages). In view of the links between financial and economic cycles, tools have been developed to smooth out fluctuations in credit and to foster financial stability.

In July 2018, the Bank of Portugal decided to apply a set of macroprudential measures to new contracts for housing loans, mortgage lending or equivalent and consumer credit.2 In particular, these measures include: (i) limits on the loan-to-value (LTV)3 ratio, which in the case of purchases of an own and permanent home is 90%; (ii) limits on the debt service-to-income (DSTI)4 ratio, which must be equal to or less than 50%, with some exceptions;5 (iii) limiting the duration of loans to 40 years, to be gradually reduced to 30 years by the end of 2022, and (iv) requiring capital and interest payments to be regular (i.e. without interest-only or grace periods). Other European countries, such as France and Finland, have also taken measures of this kind, with similar criteria or through other instruments. The Bank of Portugal justifies the implementation of these measures in Portugal based on the (still) high levels of household indebtedness, the low savings rate, the rise in new lending and some signs of excessive relaxation in lending criteria.

So, with these measures, it aims to ensure that the financial system does not assume excessive risk and that households do not take on a high financial burden.

Where is Portugal in the housing credit cycle?

Portuguese families continue to have high levels of debt –despite having reduced them over the past few years. In 2018, household debt stood at 66.9% of GDP, a 25.2-pp reduction compared to the all-time high recorded in 2009 (92.1% of GDP), but still high compared to the euro area average (57.6%). This deleveraging process masks differing dynamics in the various credit segments. On the one hand, the stock of consumer credit has grown at considerable rates (9.4% year-on-year in February 2019), due to the recovery of the economy and the stock’s low starting point. On the other hand, the stock of housing credit continues to contract, albeit in a less accentuated manner (–1.4% year-on-year in February 2019). In fact, in this segment, the buoyancy of new lending (+11.7% year-on-year in the first two months of 2019)6 is still insufficient to offset repayments.7

The main source of household debt is housing credit, which accounted for 73% of the total debt in Q3 2018. For this reason, it is worth taking a closer look at the dynamics of this segment. The rate of new lending for the purchase of housing has grown at a considerable rate, but still well below the levels seen prior to the 2008 financial crisis. More specifically, the granting of new loans increased by 17.9% in the past 12 months up to February 2019 as a whole, reaching 9 billion euros. However, new lending (4.3% of GDP) is substantially below the peak registered over 10 years ago (11.2% of GDP in 2007).

In turn, the average maturity of new loans for housing remains at levels below those registered in 2006, when it exceeded 35 years. Nevertheless, since 2015 the average maturity has increased slightly to 33.3 years in 2017,8 slightly above the 30-year target set by the Bank of Portugal for new contracts by 2022. In addition, compared to other countries in the euro area, Portugal has a much higher than average maturity (for instance, in Spain the average maturity of new contracts drawn up in 2018 was 23.7 years). These high maturities are particularly relevant, since they hinder the possibility to extend the duration of loans in the event of renegotiation. Furthermore, they can lead to payments being prolonged beyond the retirement age (at which point people typically start to receive a lower income).

There is also a compression in the average interest rate spreads in new loans granted for housing (relative to the 6-month Euribor, for instance). This is to be expected in the current context of low interest rates, greater competition among banks and better prospects for the economy and the real estate market. However, as shown in the second chart, although the spreads have fallen since 2015, they remain well above the lows registered prior to 2008. This suggests that there is a greater awareness of the importance of interest rates correctly reflecting the risk profile of households, which is preventing the spreads from dropping to the low levels seen in the past.

The compression of the spreads also has an impact on the DSTI ratio, since it reduces the monthly payments on loans used for home purchases. This ratio has decreased in recent years, declining from around 35% in 2008 to below 20% in 2016. This reduction has been facilitated by the environment of low interest rates supported by the monetary policy of the ECB, as well as by the fact that a large proportion of mortgages have a variable interest rate (84.8% of loans for the purchase of housing were signed at a variable rate in the first two months of 2019). However, the high prevalence of variable-rate loans could pose a risk to the financial stability of households in a scenario of rising interest rates. Finally, the LTV ratio has also increased since 2013, but it remains at levels below those of 2006 (73.2% in 2017, compared to 79.6% in 2006). While this increase suggests less restrictive lending criteria, the average ratio of the economy remains substantially below the 90% limit set by the Bank of Portugal, which reduces the potential losses for the financial system in the event of defaults.

In conclusion, the stock of housing credit in Portugal continues to decline because the strong growth in new lending is insufficient to counteract repayments on housing loans. However, this reduction in the total volume is expected to gradually moderate. Furthermore, the indicators that characterise the current state of the credit cycle, together with the measures implemented by the Bank of Portugal, suggest that there should not be any excessive growth in household borrowing in the short and medium term. In addition, they support the maintenance of healthier lending criteria than in the past, while also favouring the stability of the financial system and that of households themselves.

1. Includes lending to both the resident sector (households, general government, non-financial corporations and non-monetary financial institutions, except insurance companies and pension funds) and the non-resident sector.

2. These measures were implemented as a «recommendation»: banks are not bound by them, but if they choose not to implement them, they must justify themselves to the regulator.

3. Ratio between the amount of the loan and the property valuation.

4. Ratio between the sum of the monthly payments of all loans and the holder’s net monthly income. 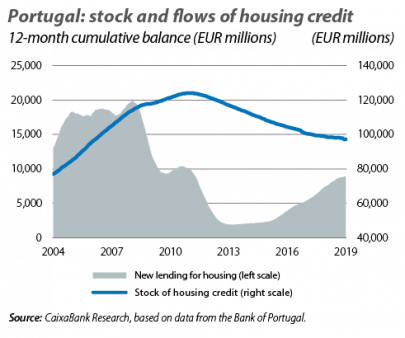 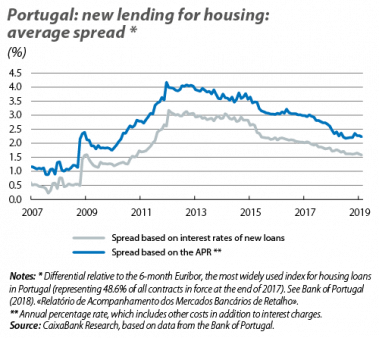 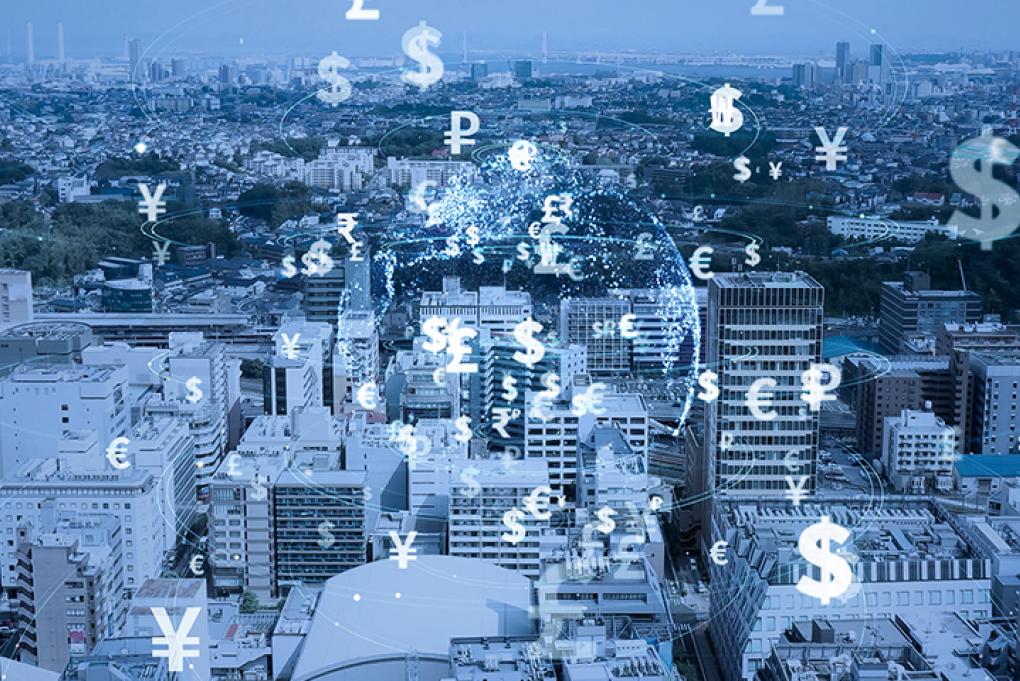 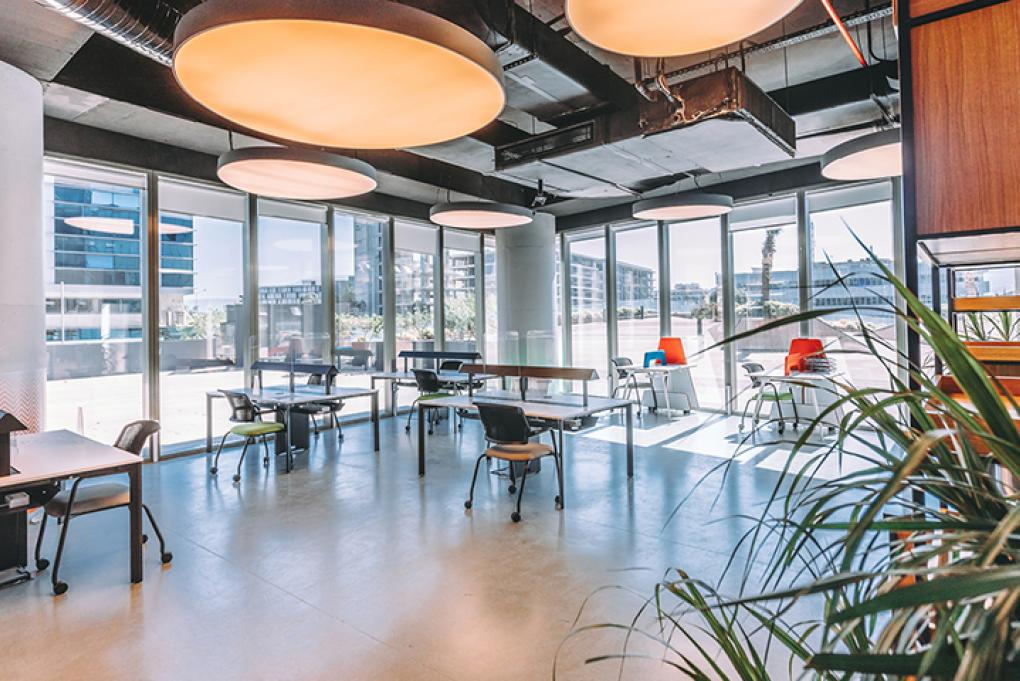