To reap you have to sow

If it's essential to regularly sow a field to ensure healthy harvests, then keeping up a good rate of investment is similarly crucial for an economy to grow. If a field is not sown, there will not be any crop to harvest and, similarly, if an economy does not invest it is unlikely to be able to produce. Resounding logic that, if applied to the current situation in developed countries, would be of great concern. The fine distinctions, however, are significant.

As can be seen in the graph below, both in the 1980s and in the 1990s investment in production remained at a high level in the main advanced countries. Specifically, in the 1980s the average annual growth for investment in machinery was 5.7%, and in the 1990s this was 5.4%. Since then, however, the rate of growth has been much lower. The average rate of growth during the first few years of the 21st century remained at a mere 2.9%. A figure that has fallen even lower with the recession, remaining at 1.0% between 2006 and 2012.

The immense slowdown in investment occurring in developed countries is even more striking when compared with the situation in the main emerging countries. In China, for example, the rate of growth in investment between 2000 and 2012 was 14% and, in India, this was 9.6%, higher levels than those recorded in the 1990s, namely 12.9% and 7.1% respectively.

Several factors lie behind this drop in investment in advanced countries and, although it may seem contradictory, technological progress is one of them. The reason is not economic but rather the difficulty in properly measuring investment in a comparable way over time. A tractor, for example, is quite similar now to 20 years ago but a computer, although the price may be similar, has much superior features. When these features are taken into account, for example by measuring the increase in memory capacity or processor speed, the increase in investment in real terms is much greater. However, the availability and reliability of data is too limited to apply this approach to all products. Accurately measuring the increase in investment in high-tech products is therefore very difficult and tends to be underestimated.(1) Another factor to consider is the growing investment in human capital, which becomes even more necessary as technology advances. This, however, is not taken into account when fixed capital investment is compared between countries. These two factors help make the decline observed seem a little less dramatic.

Mere coincidence? The pattern observed on analyzing the situation in different countries suggests that it is not. As can be seen in the left-hand graph below, wherever residential investment remained at relatively low levels, such as in Germany, machinery investment accelerated its rate of growth. However, in those countries where residential investment grew at a faster pace, such as in Ireland, the USA or the United Kingdom, production investment slowed up its rate of growth. In general, the more residential investment grew, the more machinery investment fell. It therefore seems that, in most countries, the real estate boom took resources away from the productive economy. Spain remains a little apart from this correlation as, although it went through a significant real estate boom, the rate of growth in production investment remained almost unaltered and at relatively high levels (see the article «Spanish investment is boosted by the foreign sector» in this Dossier for a more detailed analysis).

The effects of the real estate boom on the investment capacity of developed countries do not end here. Recessions associated with real estate crises are usually longer and deeper and particularly affect the capacity of companies to invest. As the value of the real property they own and use as security deteriorates, so does their credit capacity. Moreover, these periods are usually accompanied by bank crises, leading to a credit squeeze. The current recession meets all these requirements so it comes as no surprise that production investment has performed worse in those countries where residential investment has fallen the most (see the right-hand graph above). In Ireland, a country whose residential investment fell by 75% between 2006 and 2012, investment in machinery fell by 32%. Germany is once again at the opposite end of the scale: residential investment rose by 3.7% and production investment by 7.8%.

In short, although more has been sown that is apparent at first sight, the harvests will not be bountiful in the coming seasons. But as the storm fades and the economy recovers, those resources that were previously allocated to fields with low yields can be used again to sow more productive land. The public sector should also be involved in this process and, as far as possible, the bulk of fiscal consolidation should not be borne by public investment. To reap you have to sow. 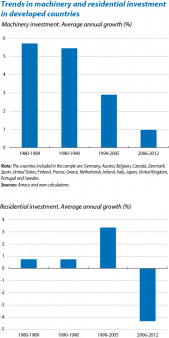 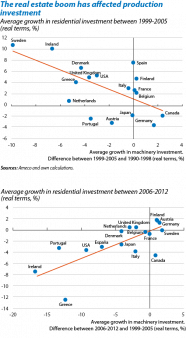