The global outlook is cooling down slightly due to lower growth than expected for activity in the US and China. Indicators for the two largest economies on the planet were somewhat weaker than expected last month and global growth prospects are cooling down moderately for 2015. However, it is important to note that, in spite of the adjustment in expectations, the US economy will continue to lead the recovery among the advanced economies and China is still on course for a soft landing while the euro area continues to recover without any huge changes. Among the positive surprises is Japan's GDP although its bad composition makes us cautious regarding forecasts for the year as a whole. Lastly, Eastern Europe has seen surprisingly strong growth in GDP in Q1.

GDP fell by 0.2% quarter-on-quarter in 2015 Q1 after the monthly revision carried out by the Bureau of Economic Analysis (BEA). The growth initially published (+0.1%) became a decline due to the effect of a foreign sector that pushed down growth more than had been calculated in the first estimate. Similarly, year-on-year growth remained at 2.7% compared with 3.0% previously. Although this quarter-on-quarter drop is mainly due to temporary factors, the base effect of a weak first quarter has forced us to revise downwards our forecast for the year as a whole: from 3.1% to 2.7% in 2015.

Activity will pick up in 2015 Q2 after a harsher winter than usual and with employees returning to work in the ports on the West Coast after the big strike towards the end of Q1. The bad weather produced an exceptionally sharp drop in the component of investment in structures and residential investment. New houses started, which are strongly correlated with activity in the construction sector and had fallen by 16.7% in February, rose in March and April by 4.9% and 20.2%, respectively. For its part the big port strike lies behind the bad figures for exports. The GDP figure for Q1 requires an additional proviso: according to a study by the Fed, when the BEA corrects GDP for seasonal effects, it tends to substantially underestimate the figure in the early quarters and overestimate it in the rest. In short, when all these distinctions are taken into account, the GDP figure for Q1 looks more positive than at first suggests.

Among the latest business indicators, services grew while manufacturing stagnated. Although the business sentiment indices (ISM) are still in expansionary terrain, there is a growing gap between the manufacturing and services indices. While the ISM manufacturing index remained unchanged in April at 51.5 points, its equivalent in services climbed to 57.8 points. On the other hand the consumer confidence index produced by the Conference Board saw a minimal gain in May after its correction in April although prices continued to rise in the area of real estate and sales also posted clear growth in April.

Employment picks up in April after a weaker March than expected. 223,000 net jobs were created in April, with construction looking particularly strong. The number of employees grew at a rate of 2.2% year-on-year and March's unemployment rate fell by 0.1 pps to 5.4% of the labour force. The broad unemployment rate (or U6), which includes under-employment (employees working part-time for economic reasons but who want to work full-time) fell by a further 0.1 pp to 10.8%. In April under-employment affected 6.5 million workers, 1.2 million less than a year ago but still above the level of 5 million (comparable to the situation in 2007). This partly explains the wage moderation observed, with growth of around 2% year-on-year.

US inflation starts to show signs of recovery. Although the general CPI fell again in year-on-year terms in April (–0.2%), prices grew by 0.1% between March and April in month-on-month terms (taking the seasonally adjusted series as our benchmark), the third monthly advance in a row since the sharp falls occurring at the end of 2014 and beginning of 2015. Core CPI (without foods or energy and therefore immune to drop in oil prices) stood at more dynamic levels (up by 1.8% year-on-year). Nonetheless, the underlying price index for expenditure on personal consumption (the Fed's benchmark index) is still posting moderate growth (1.2%), below the central bank's target (2%). As a result of the trend in prices and weak activity in Q1, the markets once again expect hikes in the reference interest rate to be delayed until the end of 2015. Nonetheless, and given the fine distinctions in GDP growth, we still predict the first rise will occur in autumn 2015.

GDP is surprisingly high in 2015 Q1. The Japanese economy grew by 0.6% quarter-on-quarter in 2015 Q1, somewhat more than expected. But these figures are marred by a bad composition, especially the contribution to growth made by inventory accumulation (two thirds of the total growth in absolute terms), a volatile component that is likely to abate over the coming months. Private consumption grew by 0.4% quarter-on-quarter but, although significant, it is not enough to offset the drop in consumption as a result of the VAT hike in April 2014. Looking at a somewhat longer timescale, the success of the expansionary measures introduced by the Prime Minister, Shinzo Abe, has been called into question as private consumption is now at the level of December 2012, precisely when Abe came to power. Wage rises are expected in 2015 which should stimulate domestic demand but their effect could be hampered by the growing share of part-time contracts. These factors substantially alter the good figures for Q1 and lead us to keep our growth forecast at 0.8% and 1.2% for the whole of 2015 and 2016, respectively.

Japanese inflation is still lethargic. In April, the CPI without food but with energy, the benchmark index for the Bank of Japan, advanced by 0.3% year-on-year. This figure is still far from its target of 2% in spite of continual quantitative easing measures via annual purchases of public debt totalling 80 trillion yen (16% of GDP). The general index stood at a moderate 0.6% year-on-year.

China continues to slow down. The latest activity indicators point to a persistent downward trend. Industrial production grew by 5.9% year-on-year in April, only slightly above March's weak figure and far below the averages for 2013 and 2014, namely 9.7% and 8.4%, respectively. Retail sales are also slowing up, with the growth rate remaining at 10.0% year-on-year in April (in December 2014 it grew by 11.9%). In the foreign sector, in April imports also continued their downward trend of the last few months and exports suprised by dropping 6.4% year-on-year. China's slowdown is occurring within a difficult context of replacing investment expenditure with greater private consumption. It also coincides with growing debt that, combining government, households and non-financial firms, reached 217% of GDP in 2014 (see the Focus «Is Chinese public debt a source of risk?»). Although we take these important sources of risk into account, our scenario continues to be one of a controlled slowdown supported by authorities that still have room to manoeuvre. In fact, the central bank cut the official interest rate again, by 25 bps (to 5.10%), the third cut in six months.

Brazil and Russia are still the emerging economies with the greatest risks. In 2015 Q1, Brazil's GDP fell by 0.2% quarter-on-quarter (–1.6% year-on-year), slightly more than expected (in 2014 Q4 the fall in GDP was 0.2% year-on-year). This decline in activity was essentially due to a bad performance by domestic demand and the figure confirms the poor prospects expected for 2015 as a whole (a drop in GDP in the order of 1%). For its part Russia saw a decline of 1.9% year-on-year in 2015 Q1, notably less than expected. Nevertheless, and given that the balance of risks is still considerably adverse, we have not changed our forecasts (3.3% drop in 2015 and 0.8% drop in 2016).

Mexico grew by 2.5% in 2015 Q1. The data reveal a certain slowdown in the Mexican economy in line with the US deceleration earlier in the year. Nonetheless the most recent figures point to a glimmer of recovery throughout 2015 for Latin America's second economy (2.8% for the year as a whole, slightly below last month's forecast). 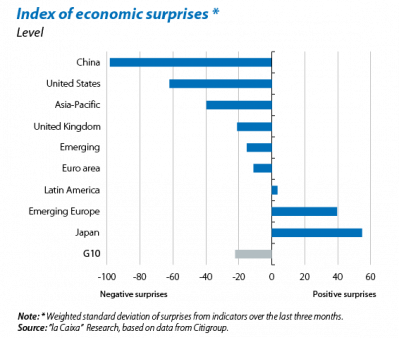 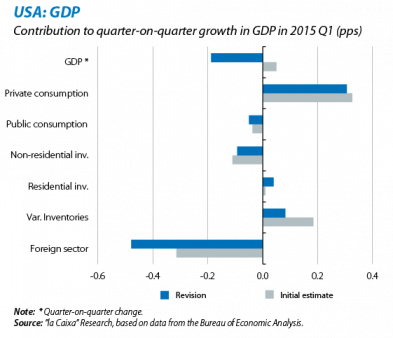 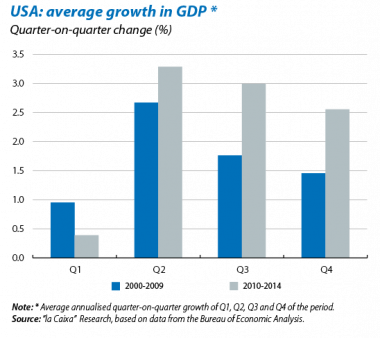 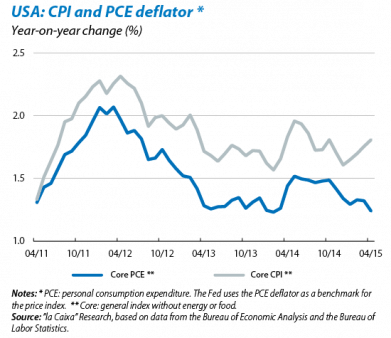