The Spanish economy in 2018: the importance of the foreign sector

The outlook for the Spanish economy in 2018 is positive. Consensus forecasts expect the expansionary trend beginning in 2013 to continue and employment to go on growing at a good rate. Correction should also continue for the main macroeconomic imbalances (i.e. private agents will reduce their debt further, the public deficit will fall below 3% and a current account surplus with the rest of the world will be maintained). This should help to consolidate a new economic cycle, more solid and balanced than the previous expansionary phase, in which the external sector plays a key role. Let’s examine this in more detail.

The Spanish economy has performed exceptionally well over the past three years with annual growth above 3%. As a result, more than 1.5 million jobs have been created. This growth rate has not only surpassed that of other developed economies but has also been better than expected. As can be seen in the first chart, the Spanish economy grew by 9.8% between 2015 and 2017 compared with 6.2% and 5.7% in the euro area and US, respectively. Spain’s actual growth was also 40% higher than the forecast.1 The euro area has also performed surprisingly well but to a lesser extent (23%), while the US has had negative growth «surprises» in each of the past three years.

Focusing on Spain, if we break down the «surprise» of GDP growth into the contribution made by domestic and by foreign demand2 we can see that, with the exception of 2015, the latter is responsible for Spain’s good economic performance (see the second chart). In other words, in 2016 and in 2017 foreign demand’s contribution to GDP growth was more than expected a year earlier, while domestic demand performed in line with forecasts.3 This simple exercise shows how the external sector has been coming to the fore, indicating an increasingly competitive and internationalised economy. However, its greater openness to international trade also makes the country more dependent than ever on its trading partners and more exposed to global risks.

So how will the world economy perform in 2018? As explained in detail in the previous articles of this Dossier, the new year will probably see more synchronised growth in the different economies overall and stronger global demand. Both factors will boost Spanish exports in 2018. But the external environment will also be the source of some global risks that could mar these good prospects. These include geopolitical risks and a resurgence of protectionism that could slow down world trade.4 A close eye should also be kept on the financial instability that could result from the monetary normalisation carried out by central banks in the main advanced economies.5 Nevertheless, Spain’s private sector has carried out significant deleveraging and balance sheet consolidation, making it more able to withstand potentially tougher financial conditions.6

The domestic factors supporting the external sector in recent years (competitiveness gains, greater export diversification and an increase in the range of products exported) will continue to boost the sector, aided by a slightly accelerating global economy.7 In geographical terms, we can calculate the increase in demand for Spanish exports in 2018 according to the relative weight of each destination and the GDP growth forecast for each country, based on Datacomex data for trade in goods and by destination country.8 According to this calculation, Spanish exports could grow by 6.4% in 2018 in nominal terms,9 and contribute 1.5 pp to GDP growth (1.1 pp when the import content of exports is taken into account). To put these figures into perspective, it is useful to analyse how exports would have grown if the number of destinations had not increased over the past decade. To this end, we used the geographical composition in 2007. The result is that export growth would have been less, 4.7%. It is therefore evident that the increased geographical diversification of Spanish exports will provide an additional boost to exports in 2018 and have an impact on GDP growth of around 0.3 pp.10

In this new expansionary phase, the fact that Spain now exports to a larger number of destinations is an advantage since it means that exporters are better able to take advantage of the good growth rate forecast for most of our trading partners. However, this good performance by the foreign sector will not entirely offset the expected slowdown in domestic demand. A deceleration that has already begun to be felt towards the end of 2017. This is due to the disappearance of certain factors that had been driving domestic demand in recent years (lower oil prices, tax cuts and durable goods purchases and investments that had been postponed during the crisis). The uncertainty related to Spain’s more complex political situation could also have an impact. As a result, CaixaBank Research expects GDP growth to moderate from 3.1% in 2017 to 2.4% in 2018. Nonetheless, this slower rate of progress will still be among the highest of the advanced economies.

1. We compared the growth forecast made by Consensus Forecasts in January of the previous year with the actual growth figure. For example, we used the January 2014 publication by Consensus Forecasts to obtain the GDP growth forecast for 2015. Growth data for 2017 have not yet been published, so the forecast made in January 2016 has been compared with the most recent forecast (November 2017).

2. The forecasts for contribution to GDP growth of domestic and foreign demand come from the FUNCAS panel in March of the year prior to the forecast reference period.

3. The positive surprise in external demand is mainly due to lower than expected import growth.

4. See the article «Risks in 2018: (geo)politics and international trade» in this Dossier.

5. See the article «Global macrofinancial risks» in this Dossier.

6. It should be noted that the CaixaBank Research central scenario assumes a very gradual adjustment of the ECB’s monetary policy and that financial conditions will remain highly accommodative for a long period of time.

7. For a detailed analysis of the destination markets for Spanish exports, see the Focus «Geographical mapping of Spanish exports» published in MR10/2016.

9. Note that this calculation does not take other factors into account that also influence exports, such as competitiveness or changes in preferences in destination countries.

10. The direct impact of export growth on GDP is about 0.4 pp but given the high import intensity of exports, the overall effect on GDP growth is somewhat smaller. A volume effect must also be taken into account, since exports have risen from 25.7% of GDP in 2007 to 33.2% currently. This effect lies behind about 0.1 pp of the total impact (namely 0.3 pp). 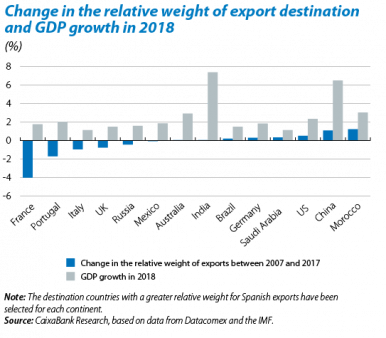 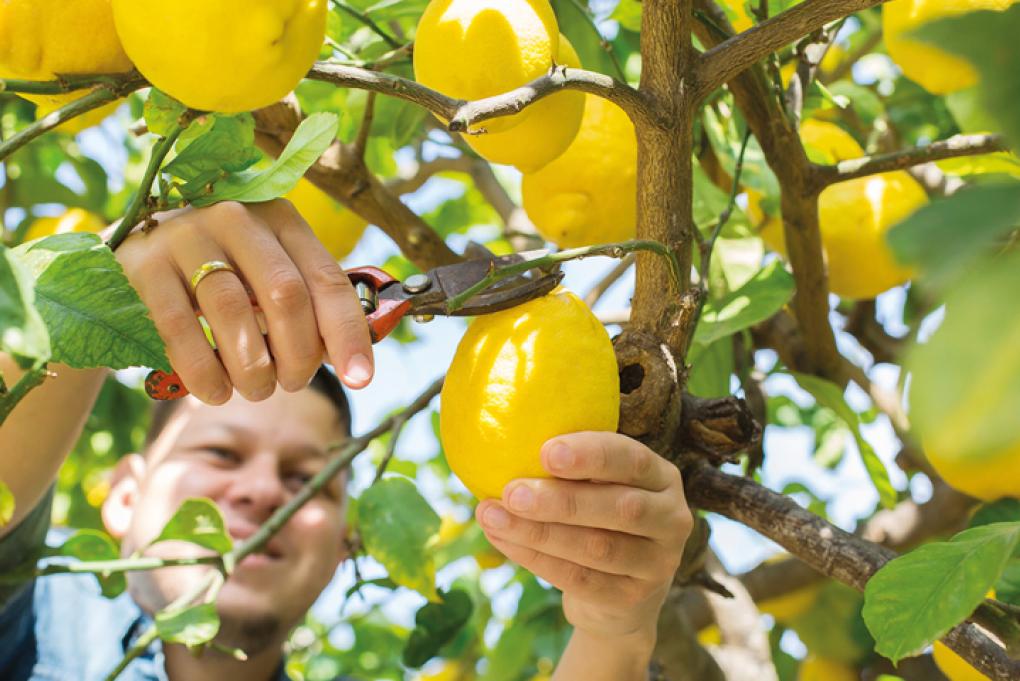