The Spanish economy in 2019: a year of transition towards more sustainable levels

We are approaching the end of 2018 and, as is usual at this time of year, we want to distance ourselves from the everyday questions, take a step back and consider what we can expect for the coming year. As we shall see, we expect that 2019 will be remembered as a year of transition: the year in which the economy took its foot off the accelerator, shifted gear and settled into a comfortable cruising speed.

But before delving into foresight, let us take a small detour. It is not possible to understand where we are heading without briefly reviewing the recent past. The Spanish economy has just experienced three years of very high growth. This high rate of growth has been possible thanks to various factors. Firstly, cyclical momentum: emerging from the recession, many areas of the Spanish economy had a lot of room to grow. Therefore, when the economic outlook improved, the mere recovery of activity from the depths that had been reached during the financial crisis provided a strong boost to growth.1 The cyclical momentum also benefited from some of the reforms that the Spanish economy carried out in the sphere of labour and in the financial sector, among others. Secondly, the Spanish economy benefited from a series of temporary factors that gave further impetus to the recovery. Among these factors, of particular note were the sharp fall in oil prices that took place at the end of 2014, the reduction of interest rates as a result of the ECB’s expansionary monetary policy, and the global economic recovery, which helped to boost Spanish exports and the tourism sector.2

However, as early as 2017 these support factors, or tailwinds as they are also known, began to lose strength. In some cases, they even changed direction and became headwinds, such as the oil price, which has gradually recovered since mid-2017.3 In addition, the international context has suffered a slight deterioration in recent quarters: the normalisation of US monetary policy has begun to have an impact on the markets, while the escalating trade tensions between the US and China have weighed heavily on global confidence in recent months. All these dynamics have been reflected in the latest data available to date regarding the Spanish economy. In particular, the data show that the pace of economic growth has slowed compared to recent years, although it still remains high. So, with this background, what can we expect for 2019?

To begin with, we expect domestic demand to remain the main driver of growth for the economy. This forecast is mainly based on two elements. Firstly, it is based on the positive trend in the labour market, which continues to show rapid job growth. Although the pace of job creation can be expected to moderate in line with economic activity, the favourable outlook for demand and the high degree of slack that persists in the labour market suggest that the economy will continue to generate employment at a rate slightly above 2%. In addition to the positive trend in employment, there has been an incipient recovery in wages, which is now apparent in the latest data and which we expect to continue into 2019.4 All this will continue to support private consumption. Secondly, investment is expected to remain buoyant, albeit at slightly more moderate levels, thanks to the context of accommodative financial conditions and the favourable outlook for demand (see the first chart).

External demand, meanwhile, will continue with a moderate tone. After growing in recent quarters below expectations due to the increase in uncertainty – caused by the trade tensions between the US and China – and the slowdown in the tourism sector, we expect exports to partially recover. However, despite this recovery, strong domestic demand will drive up imports, which will make the contribution of the external sector virtually nil in the coming quarters.

What is the combined effect of all these elements? Well, the positive trends in employment and investment will support economic growth. In the second chart, we show the forecast for GDP growth in 2019 (2.1%), as well as its breakdown according to the contribution of the underlying component – the growth driven by the accumulation of production factors: capital and labour –, contextual factors (oil prices, interest rates, and tourism) and total-factor productivity (TFP).5 As we can see, the high growth registered between 2015 and 2017 was the product of a strong recovery in underlying growth. This was driven by strong job growth and the recovery of investment, as well as the impetus provided by the tailwinds. In contrast, in 2018 and 2019 we can see how these tailwinds have faded and growth will stabilise. It is expected to stabilise at around the growth level of the underlying component, which itself will remain healthy due to the economy’s solid fundamentals (capital and employment), and at the level of the contribution from TFP, which we expect to be modest but in keeping with recent experience.6 Therefore, despite the fading of the contextual factors, we can see that the economy will continue to grow at a high and more sustainable rate.

By definition, the future is uncertain. As such, an analysis of the economic outlook would be incomplete without considering the possibility that, next year, there could be some unforeseen event that distorts the expected course of events. To reflect this uncertainty, in the following table we show the sensitivity of a series of macroeconomic variables when faced with two scenarios. The first scenario is representative of a negative shock in one of the world’s major economies, but with a contained impact at the global level. For example, this could be due to an abrupt slowdown of the US economy after the fiscal boost of the Trump Administration comes to an end, and/or due to the impact of trade tensions with China.7 The second scenario is more severe and is inspired by a tempered version of the sovereign-debt crisis that occurred between 2010 and 2012. This scenario could arise if tensions between the Italian Government and the European Commission were to take on a more serious tone and the sustainability of Italy’s public debt were called into question. As shown in the table, depending on the scenario considered, the Spanish economy would face a more or less pronounced slowdown compared to what is expected. Nevertheless, in both cases the economy would stay well clear of the possibility of a recession, while the unemployment rate would continue to fall, albeit at a slower pace than predicted, and there would be a moderate increase in the risk premium.

By way of conclusion, the outlook for 2019 is encouraging. The fundamentals that drive growth are well established and the slowdown observed compared to prior years is mostly a reflection of the natural course of the business cycle. Nevertheless, this should not lead us to be complacent. The challenges facing the economy, which include the rather modest trend in the country’s productivity, the high public debt and the duality in the labour market, are substantial and we should take advantage of this good phase of the cycle to steer them in the right direction.

2. For a more detailed analysis of the contribution of these support factors, see «Should we be concerned about the slowdown of the Spanish economy?», in the MR10/2018.

4. For example, the pay reviews agreed under collective agreements up to October 2018 amounted to 1.7%, while those signed a year earlier were 1.4%.

5. Total-factor productivity is obtained by calculating the remaining difference between GDP growth and the growth that is explained by the accumulation of production factors and economic factors. According to this definition, the growth that TFP contributes could also be considered part of the underlying growth.

7. The historical episode on which we have based this scenario is the dotcom bubble crisis, which occurred between 2000 and 2002 and led to a marked slowdown in the US economy, although it had a moderate global impact. 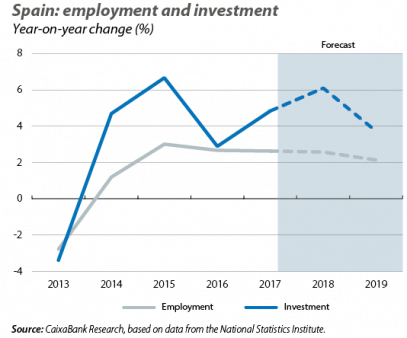 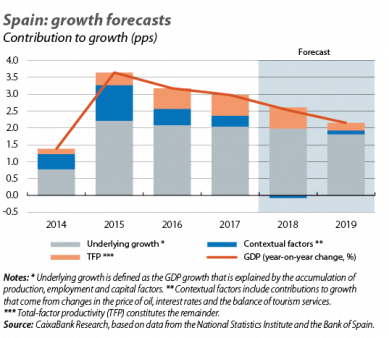