Why is the euro area growing less than the US?

Europe's growth prospects are not encouraging over the medium to long term. Although it is true that the euro area is recovering, with a 1.5% growth forecast in 2015 and 1.8% in 2016, we should remember that part of this recovery is being supported by favourable tail winds: low oil prices, expansionary monetary policy and the euro's depreciation. In fact, growth forecasts beyond 2016 provided by the main central banks and international organisations are considerably lower than those for 2015 and 2016. The IMF, for example, estimates potential growth over the medium term to be just 1%.1 To identify more precisely the reasons why the euro area is facing such a dismal future, this article breaks down the growth of the last 15 years into the contribution made by two production factors, capital and labour, at an aggregate level and also the contribution of productivity.

Starting with an analysis of productivity, defined here as total factor productivity (TFP),2 limited growth is a problem for euro area as a whole but particularly for its periphery, a region that has seen a continual decline in this variable (average TFP growth in the periphery was –0.7% in the period 1999-2014). Nevertheless the core is not without its difficulties either as, since 2007, it has also witnessed a deterioration in productivity, albeit less severe (see the first graph).

Capital's total contribution to growth can be divided into ICT and non-ICT capital. The latter has contributed to growth in the euro area as much as or even more than in the US. This is not the case of ICT capital, however, a factor in which European countries have not kept up with the US. This difference is a key reason for the gap in growth between US and euro area GDP (both in the core and the periphery), particularly in the pre-crisis period (1999-2006).

The contribution of the labour factor has also been important, in particular the number of hours worked. In the pre-crisis period the contribution to growth of the quantity of labour was higher in the euro area than in the US and UK, boosted especially by the periphery. Since the crisis started, however, the number of hours worked in the periphery has plummeted, bringing down the figure for the euro area as a whole. On the other hand, although the contribution of labour quality in the period 1999-2014 was not exceedingly large (around 0.2 pps), this was both stable and similar between the different countries.

The gap in growth between the euro area and the US is therefore mainly explained by lower growth in total factor productivity and, to a lesser extent, to the lower contribution of ICT capital (see the second graph). The trend in the quantity of labour in the pre-crisis period managed to contain these differences in GDP growth caused by the TFP and ICT capital but, since 2007 and particularly in the periphery, massive job losses have merely widened this gap.

Now that we have detected the causes of the differences in growth potential in the past, we should look to the future to correct them. On the one hand labour quality needs to make a larger contribution while, on the other, Europe's policies should foster an environment that encourages economic agents to invest more in ICT capital. With regard to TFP, the recommendations point in two directions: improving the regulatory framework to boost competition and reducing market fragmentation. Both the European Commission and the IMF, for example, suggest moving towards a single market for capital, transport, energy and the digital economy.

2. TFP is calculated as the difference between an economy's growth and the contribution made to growth by labour and capital factors. 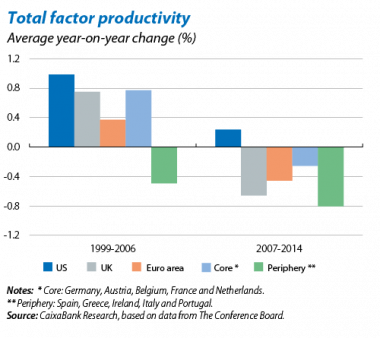 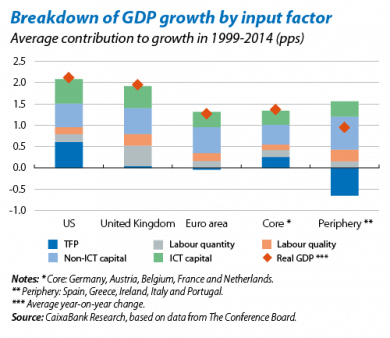