The fall in oil prices: an inscrutable blessing?

In general, provided a drop in the oil price is not due to a fall in demand, this benefits world growth. The reason lies in the different propensities to consume and save between oil-exporting countries and oil importers. Specifically, when revenue increases, importers are more likely to consume than exporters, so an increase in consumption of the former more than offsets the lower consumption and investment by the latter.

However, on this occasion different elements have come into play against the generally positive effect of lower oil prices, even though this fall was essentially due to a shock in supply. Firstly, the size and speed of the fall have led to exceptional reductions in consumption and investment in the 34 oil-exporting countries, to such an extent that their total growth went from 2.3% in 2014 to 0.6% in 2015. Similarly, the considerable reduction in oil revenue has drastically worsened their macroeconomic situation (their aggregate fiscal deficit went from 1.7% of GDP to 5.7% and their current surplus of 2.6% of GDP became a deficit of 1.6%) , in many cases leading to social unrest and political instability.

Secondly, the increase in domestic demand in countries that import oil has been disappointing for several reasons. One of these is the sharp drop in investment in the US, which is a net importer of energy but also one of the world's large oil producers. This decrease in investment has spread beyond the US energy sector, probably because the current fall in oil prices has been accompanied by greater uncertainty regarding the global macroeconomic situation. Another reason is the fact that it has coincided with a widespread tightening up of financial conditions caused by the Fed starting to raise interest rates, and with growing doubts regarding China's slowdown. Undoubtedly tighter financial conditions and China's slowdown have negatively affected the growth of numerous net oil importers (mostly emerging countries). The aggregate growth of all importers therefore remained unchanged between 2014 and 2015 and held steady at 3.6%.

Lastly, the IMF points to a third element that may have offset the positive effect of cheaper oil. The slump in crude might have lowered inflation expectations (although there is no clear evidence for this) and pushed up real interest rates. Higher real interest rates hinder investment and consumption and ultimately reduce growth. Under normal circumstances, the monetary authorities could offset this effect by lowering the nominal interest rate but, at zero-lower bound, there is no more room to manoeuvre in this area.

So what can we expect for this year and the next? As long as oil continues to appreciate gradually, as expected, we should finally witness a positive effect on world growth. For net oil exporters, higher oil prices will relieve their finances. And for net importers it will represent a manageable loss since the price is only expected to recover very gradually. Exceeding the threshold of 45-55 dollars per barrel will also make shale oil and offshore extraction more profitable, leading to a significant rise in investment and production. 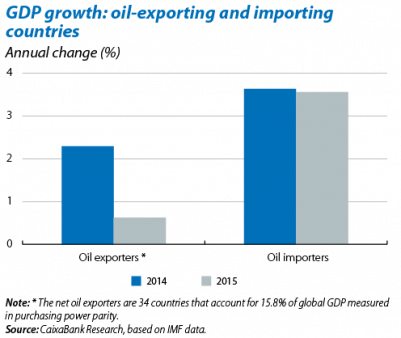 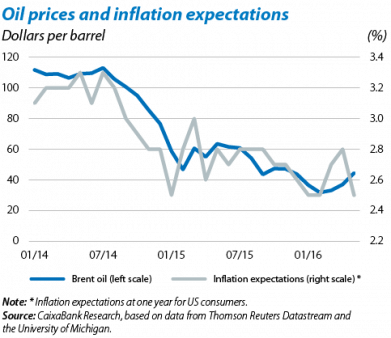