The cost of bank debt: a thing of the past

One of the most immediate consequences of the Lehman Brothers bankruptcy at the end of 2008 was the closure of wholesale financing markets for banks. Huge doubts regarding the losses banks might suffer, as well as their capacity to absorb them, scared off investors and pushed the cost of wholesale debt up to prohibitive levels. Since then, tensions in the debt markets are not what they used to be. But, in this new regulatory context, neither should we expect the cost of wholesale debt to get back to its pre-crisis level.

Let's start by defining the concept of wholesale funding. This usually refers to the part of banks' funding that does not come from customer deposits. Neither does it include central bank funding which, under normal situations, should only represent a small part of the balance sheet. Wholesale funding is made up of a wide range of instruments such as interbank deposits, mortgage-backed securities, senior and subordinated debt. Each of these instruments has different features (in terms of liquidity, maturity, guarantees or seniority of the debt should the bank go bankrupt) which make them more or less attractive to investors. The cost of each one for banks will depend on how investors value these different characteristics at any given time, in line with their expectations regarding macroeconomic trends and the bank's performance.

So how are prices formed for such instruments? Apart from the instrument's maturity or liquidity, two of the most important features for investors are the presence (or lack thereof) of guarantees that the amount borrowed will be repaid and the priority of this payment in the case of bankruptcy. Both factors determine the amount investors might get back should the bank become insolvent and, together with the likelihood of this event occurring, determine the expected return from the instrument. Intuitively, this expected return must be sufficiently attractive compared with the yields offered by other, lower risk assets such as public debt.

Throughout the financial crisis, as well as the subsequent recessions and sovereign debt crisis, the cost of the different wholesale funding instruments rose substantially on several occasions. On the one hand, doubts regarding bank losses, the quality of the assets used as collateral as well as the real capacity of governments to bail out insolvent banks worsened the expectations of investors regarding the probability of financial institutions going bankrupt and whether they would be repaid should this happen. On the other hand, in the periphery countries bank debt was compared with the ever-rising yields offered by the country's sovereign debt. In Spain, for example, the spread between five-year senior bank debt and German public debt with
the same maturity reached more than 4 p.p. on more than one occasion during this period. Banks have reacted by changing the composition of their liabilities, reducing the share of sources of wholesale funding (from 37% at the end of 2007 to 24% currently, in the case of Spanish banks) and replacing this with ECB funding. Nonetheless, this substitution is not perfect as it is exceptional in nature and cannot really be considered a stable source of financing for mortgages or loans to enterprises over the medium to long term.

In the coming years, financial institutions are going to have to reshuffle their funding structure. Not only because they need to gradually replace ECB funding but also because of the imposition of different regulatory ratios on liquidity and leveraging, as well as the framework for banks with solvency problems.1 This last issue, in particular, involves the introduction of the so-called bail-in to minimise the use of public resources in such cases. Essentially, when a bank is in difficulty, the bail-in rules force its shareholders and creditors without a guarantee to assume losses equivalent to at least 8% of the bank's total liabilities (including own funds), following a pre-established seniority, before capital can be injected by the Resolution Fund. This encourages banks to issue capital and hybrid instruments (subordinated debt or convertible securities) until this 8% has been covered. The bail-in rules also state that national resolution authorities must establish the minimum requirement for eligible liabilities (MREL) for each institution, in line with its risk, size and business model. As such liabilities are unsecured, banks are likely to achieve the MREL by issuing senior debt.

The introduction of the bail-in represents a firm commitment not to bail out banks in difficulty and consequently means that creditors are more likely to suffer losses. We might therefore expect senior debt to become more expensive. The banks most affected should be those that are currently more leveraged as the risk for senior bondholders is even greater if the bank's capital and subordinated instruments do not reach 8% of its assets. On the other hand, those banks whose own funds are already above this figure and are considered to be sufficient to cover unexpected losses should not see any great change in their senior debt.

Although the bail-in will not come into force until 2016, the rising cost of senior debt can already be observed in the price of such instruments. To quantify this, we have analysed changes after the bail-in rules were approved by the European Council in August 2013, in the spread between yields on bank debt and public debt with the same maturity. This spread will depend on the characteristics of the bond (years to maturity or the subordinated nature of the debt, for example), on the bank issuing it (its specific risk, degree of leveraging, whether it's systemic, its return on assets, etc.) and on macroeconomic trends. Once all these factors have been taken into account, an increase in the spread after introducing the bail-in rules can be interpreted as a higher return demanded by investors because they are now more likely to suffer losses.

Following this reasoning,2 we have taken a sample of 633 outstanding issuances of bank bonds issued by 19 different institutions and have analysed the monthly trend in their yields from December 2007 to March 2014. The results show that, on average, the introduction of the bail-in has increased the cost of senior debt by 19 basis points, although for some banks this rise has been as high as 72 basis points. In general, and as seems logical, the greater the risk of the bond, the higher this increase in cost. This is reflected in the fact that both the specific risk of the issuing bank and the years to maturity of the bond or the bank's price to book ratio increase the impact of the bail-in. It is also interesting to note that senior debt becomes even more expensive for those banks that can be considered systemic (those which would be more likely to be bailed out in the case of difficulty). These findings therefore suggest that this regulatory reform has managed to increase investor sensitivity to risk and will help to correct, at least in part, the advantageous situation enjoyed by some large banks which were bound to be bailed out if they had problems.

In summary, with this new regulatory framework the cost of debt will be higher, reflecting an assessment on the capital adequacy of the issuing bank. In itself, this is very positive. However, we should question whether this was the best time to implement such changes, given that banks now have to adapt to them before they have managed to completely repair their balance sheets and before debt markets have got back to normal.

1. In the case of the European Union, this framework has been defined by Bank Recovery and Resolution Directive (Directive 2014/59/EU of the European Parliament and of the Council, of 15 May 2014). 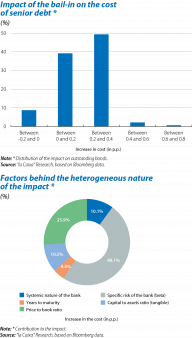