The impact of financial conditions and vulnerabilities on growth

How much will the tightening of financial conditions slow down global growth? This is a key question in view of the tightening of monetary policy by the US Federal Reserve (Fed). Below, we present an indicator which will help us to answer this question and we analyse the main financial factors that could put growth at risk.

In previous Focuses, we have analysed the economic impact of the tightening of monetary policy based on indicators of financial conditions.1 In this article, we will rely on a new indicator which has become a benchmark for the International Monetary Fund (IMF): growth at risk (GaR).

Another way to view the chart is to focus on the tails. For example, the GaR predicts that in a very adverse scenario (which has a 5% probability of occurring), global growth in one year would be equal to or less than 3%. This is slightly below the value that the indicator had in the past two quarters (when global growth was forecasted to stand at 3.5% in the adverse scenario), which indicates that the deterioration of financial conditions in recent months has led to an increase in negative risks  surrounding growth.

In any case, a growth rate of 3% in an adverse scenario is still high, and it is also surprisingly close to the central scenario (which has a 50% probability of occurring). This suggests that the GaR over a one-year period is rather moderate. However, in the medium term the risks are greater: the current financial conditions predict that in an adverse scenario three years from now (i.e. with a 5% probability of occurring), global growth would be negative (equal to or less than –0.4%).

Finally, it is important to highlight an interesting empirical relationship: accommodative financial conditions in the present boost projected growth in the short term but increase the prospects of poor economic performance in the medium term. In fact, as
is illustrated by the difference between the blue, grey and orange lines in the second chart, according to the GaR, in recent years, more relaxed financial conditions (which have increasingly prevailed since late 2016) have been associated with better prospects for growth in the short term but with more negative scenarios in the medium term.

In short, in recent months, the GaR points towards an increase in negative risks in the short term (albeit at a relatively contained level), and it also shows that the medium-term risks remain high and could have a highly negative impact on growth. But which risk factors have increased in recent months, and what are the financial vulnerabilities behind the risks in the medium term?

The low interest-rate environment of the past 10 years is a double-edged sword. On the one hand, it is brought about by the need to have accommodative financial conditions that support the economic recovery. Yet, on the other hand it has facilitated the emergence of financial vulnerabilities. In particular, the IMF’s last Financial Stability Report highlights four major sources of weakness which, in the event of a sudden tightening of financial conditions, could put growth at risk:3 (i) high valuations of financial assets and very low risk premiums, (ii) high leverage of the non-financial sector and weaknesses in the balance sheets of some financial institutions, (iii) significant and opaque interconnections of China’s financial system, and (iv) uncertainty about whether the more solid foundations of the emerging economies really make them less sensitive to changes in financial conditions.

These factors are nothing new,4 but some of them have received more attention in the wake of the financial volatility of the last few months. On the one hand, in the equity market, standard metrics such as the CAPE ratio show that, even after the corrections of the first quarter of the year, valuations remain high (especially in the US stock market) and their sustainability depends, in part, on there not being any sudden interest rate hike.5 In the same vein, in the fixed-income market, risk premiums remain very low, even in high-risk segments (see the third chart), and have encouraged the issuance of lower quality corporate bonds. On the other hand, although the emerging economies have generally reduced their current account deficits and have accumulated international reserves, they have also been increasingly exposed to investors who are less committed and prone to withdrawing their investments at short notice.6

Against this backdrop of vulnerabilities, in recent months there has been an increase in the risk of there being a spike in inflation. The IMF’s analysis shows that market prices still assign a low probability to this scenario and that, in fact, the reduction of risk premiums is partly due to the perception of a low risk of inflation.7 As such, any unexpected spikes in inflation could put more stress than expected on the financial conditions by provoking a sudden rise in risk premiums, as well as putting pressure on central banks to tighten their monetary policy more quickly. Furthermore, in this scenario, the emerging economies could suffer outflows of capital, which would put the solidity of their foundations to the test.

With this risk map, the central banks are faced with the challenge of gradually withdrawing the monetary stimulus without compromising short-term growth, while also addressing the financial vulnerabilities in the medium term. So far, with clear communication and gradual changes to monetary policy, they have managed to get the financial markets to adjust relatively smoothly. However, the latent vulnerabilities are by no means inconsiderable and they could lead to a bumpy road ahead.

1. See the Focus «Growth in the emerging economies and global financial conditions: a close relationship» in the MR05/2018.

5. For further details on the CAPE indicator and the overvaluation of the US stock market, see the article «US equity prices: a cause for concern?» in the Dossier of the MR11/2017.

6. This is suggested by the recent performance of the investor base risk index developed by S. Arslanalp and T. Tsuda (2014), «Tracking Global Demand for Advanced Economy Sovereign Debt», IMF Economic Review. 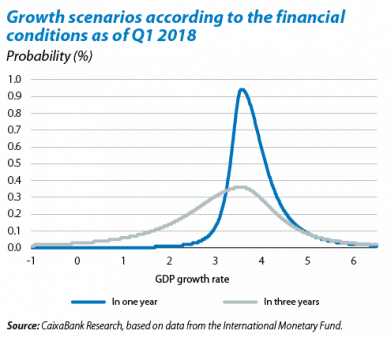 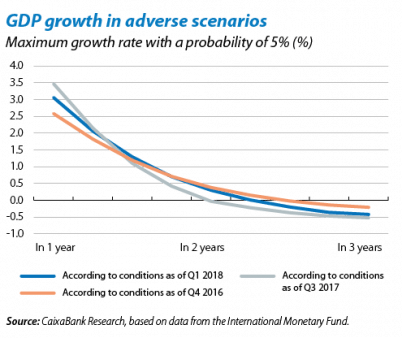 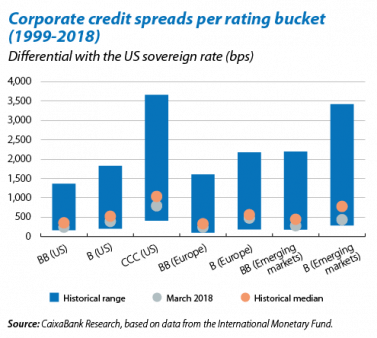 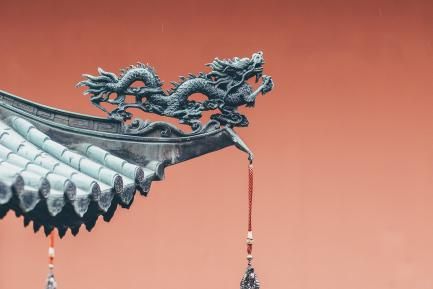