The party continues, but for how long?

Expectations of more growth and more liquidity are boosting investor sentiment. On the one hand, Q2 cyclical indicators point to more dynamic economies worldwide and the developed economies in particular. Of note is the case of the US where growth is accelerating after a Q1 hindered by unusually severe weather conditions. At the same time, the comments made by the Federal Reserve (Fed) regarding its monetary strategy have been quite expansionary in nature insofar as they have no intention of hurrying up the normalisation process. Moreover, the European Central Bank (ECB) has made the most of its carrot, hinting at an impending extension to stimuli. Such messages from the central banks have helped to ease yields on the sovereign debt in both regions. Risk assets, like equity and corporate bonds, have prolonged their good performance. In fact, some indexes on Wall Street and in Europe have set new records. Also important is the incredibly low level of market volatility. From this starting point, the great complacency reigning among investors could give rise, in the case of setbacks, to readjustments in the value of financial assets and a more volatile financial environment. This might well occur if the ECB or the Fed end up taking a less accommodative stance.

The Federal Reserve provides more information on its plans. The minutes of the meeting held in April by the Monetary Policy Committee express a clear intention to keep monetary conditions relaxed «for a considerable time» after tapering has ended. With this discourse, the institution's aim is to convey to investors the idea that interest rates will be normalised slowly and gradually. The intention is to avoid upswings in volatility in financial markets and, ultimately, underpin the economic recovery. Thanks to these messages, investors have put back their expectations of a start to interest rate hikes to the second half of 2015 and the expected rate of increases as from that time has moderated.

The ECB makes it clear that it will act in June. Repeated statements by members of the Council have created the almost unanimous expectation that a packet of measures will be announced on 5 June. In fact, after May's meeting, the ECB's Governing Council has looked more than prepared to take additional expansionary measures due to the excessively low inflation rate. The fact that some economies in the euro area are losing steam, the strength of the euro and expectations of a negative price and credit spiral are reasons enough for the central bank to act. Although the ECB has not specified what these measures will be, the institution is very likely to cut the official interest rate to 0.10% in June (from the current level of 0.25%). It is also considering adopting measures aimed at boosting credit such as another very long-term liquidity auction (LTRO) with the condition that banks must increase lending to SMEs, or a selective ABS purchase programme. The markets' reaction to this expected scenario of easier monetary conditions has initially led to a drop in the Euribor interest rate and the depreciation of the euro. The European currency has fallen by more than 2% in the last few weeks, down to around 1.36 dollars.

Treasury yields respond to expectations of accommodative monetary conditions. The Fed's dovish tone over the last month has been a key factor, just at the time when the incipient improvement in activity figures could have led to greater tension in yields. Not only have these not risen but they have even fallen considerably; in the case of 10-year Treasury bonds down to around 2.5%. This movement has been reinforced by the termination of short positions in derivative bond markets by speculative investors, who have been caught on the wrong foot. The key to this whole scenario is the absence of inflationary pressure. The Fed is attempting to highlight this point, placing particular emphasis on arguing and documenting the fact that the labour market is far from fully recovered and, therefore, is a risk to price stability. Logically, the trend in indicators capable of predicting inflation (e.g. wages) will be key for movements in the financial markets over the next few months. Deviations to the Fed's benign scenario could be very disruptive for the bond market.

Yields on the euro area's sovereign debt are also falling. The ECB's repeated signals regarding monetary stimuli are in addition to the knock-on effect from the US. Yield on the German 10-year bund has fallen to around 1.35%, very close to its all-time low of 2012. Yields for some periphery countries are also close to new all-time lows, as is the case of Spanish and Italian debt. One contributing factor to the good performance by Spanish sovereign bonds, in addition to improved macroeconomic indicators, are the favourable assessments by several international organisations. On one hand, S&P raising its rating for Spain to BBB (from BBB–) after the recent rating improvements made by Fitch (BBB+) and Moody's (Baa2). On the other, the IMF's annual review of the Spanish economy, which has provided positive results (although proposing further reforms to be carried out in a range of areas).

Meanwhile, conditions are improving favourably in emerging countries, albeit not uniformly. The normalisation of the situation experienced at the beginning of the year has led to a less uncertain environment. Appropriate management by governments and central banks in many of these countries is being rewarded by investors returning part of the capital that had left their economies at the start of the crisis. The stock markets and sovereign bonds of some of these economies, such as Indonesia, Turkey and South Africa, have performed excellently in the last few months, recovering part of the losses suffered in 2013. For its part, cyclical indicators in China point to the end of the slowdown and recent economic policy actions, such as liberalising the capital market in May, are helping to boost renewed expectations regarding its economy.

The stock markets remain firm. The expectation of accommodative monetary conditions over the coming quarters has led to a relative improvement in share prices. This situation has become stronger as the statements made by those in charge at the ECB suggest that the institution is more than likely to adopt further monetary stimuli in June, reflected in the new highs reached by some developed stock market indexes, such as the S&P 500 and Germany's DAX. In Europe, investors' risk appetite has been partly quashed by the lacklustre corporate earnings season in Q1 and by the warning of disparate growth figures among the euro area's core countries (France and Germany). In spite of the low levels of volatility in the stock markets, increasing doubts regarding the capacity of the region's activity to recover and tensions between Russia and the Ukraine have tipped the balance in favour of defensive shares to the detriment of cyclical. However, at a more specific level we should note the good performance by the Ibex 35, accumulating gains of more than 7% in the year to date. The good performance of the economy, the reorganisation of the national banking system and the fall in risk premia form the basis for the consolidation of this upward trend. With regard to emerging markets, lower Treasury yields, improved growth expectations in the region and greater investor risk appetite have helped capital flows to return to these economies, giving their stock markets a shot in the arm.

The good tone of corporate bond markets is consolidating. Large amounts of liquidity worldwide and very low interest rates are continuing to play a fundamental role in supporting high prices and low spreads for corporate bonds from the developed block. In Europe, this situation is being further strengthened by increased expectations of the ECB using stimuli measures. Given this scenario, the euro area's large financial firms are taking advantage of the current conditions in the markets to increase their capital bases by issuing hybrid bonds. Non-financial firms, on the other hand, continue to secure financing by issuing bonds, mostly classified as high yield. However, the lower yield for European corporate bonds compared with US bonds, as well as the limit reached by some European firms in terms of their capacity to issue more bonds, are bringing down the overall volume of issuances since the beginning of the year. 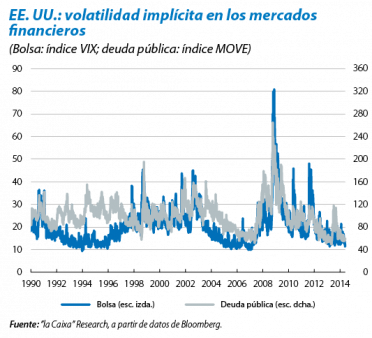 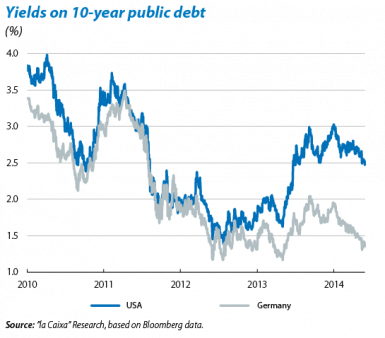 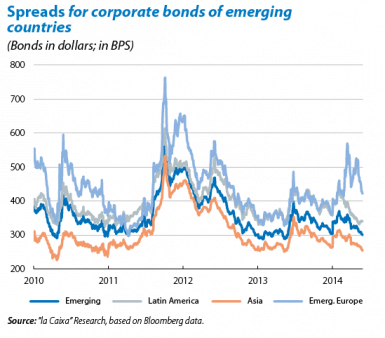 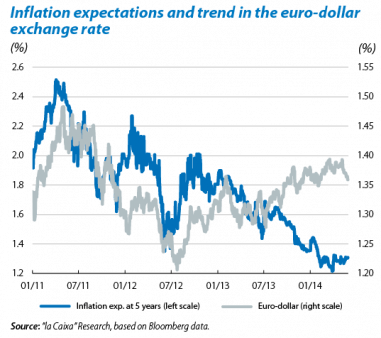 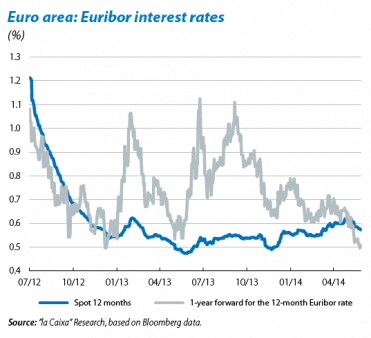 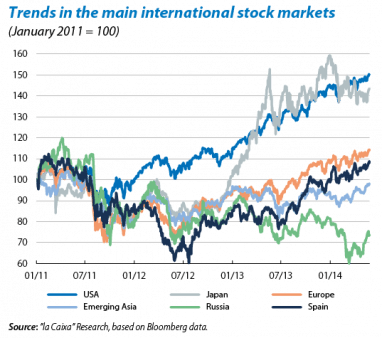 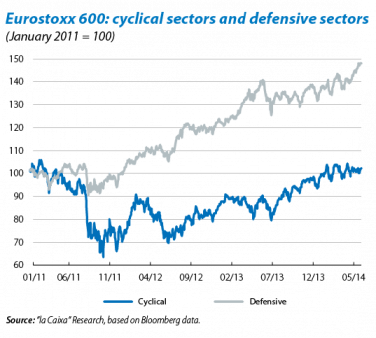 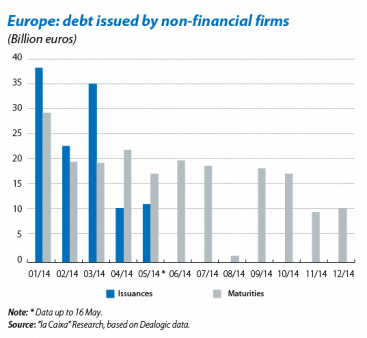