The PIIGS have returned to the bond market - for good?

With the start of the new year, the public debt of the euro area's periphery countries or PIIGS (Portugal, Ireland, Italy, Greece and Spain) has intensified the rate of improvement recorded over the last few months. Spain and Italy have seen the interest rate demanded for their ten-year bonds fall below 4%, the level prior to the start of the sovereign debt crisis. Even more symbolic is the fact that the governments of Ireland and Portugal have been able to return to the markets to obtain financing by placing bonds. Even Greece says it is considering the possibility of financing itself through the capital market by the second half of this year.

Is this prosperous episode merely temporary or does it suggest that the euro area debt crisis is now on the way to being resolved once and for all? Many different factors need to be considered in order to answer to such an important question. Some are at a pan-European level (such as the degree of commitment to and the material advances made in economic, financial and political integration within EMU). Others fall on the shoulders of the countries in question (such as the correction of macroeconomic and fiscal imbalances as well as structural reforms). On the whole, the outlook is favourable although we should still be cautious. One aspect that is, in principle, less important but which could end up being critical depending on how international financial markets evolve is the extent and timeframe of the different governments' financing needs. This can be determined by projections for deficits and debt maturities.

The particular cases of Ireland and Portugal become especially relevant in the year of their rentrée. Ireland
was very successful in placing ten-year bonds at the beginning of January; in other words, just after it had ended its bail-out programme last December. It managed to place 3.75 billion euros at an average cost of 3.54% after receiving requests for 14 billion. Portugal issued its first debt since May last year: 3.25 billion in 5-year bonds at a cost of 4.66%, while demand reached 11.2 billion. Comparing these requests with the financing needs of Ireland and Portugal in 2014, totalling about 13 and 23 billion euros respectively, these countries should not encounter too many problems from now on.(1) In the case of Portugal, the profile of maturities has been eased thanks to the debt exchange carried out in December, in which 6.6 billion euros in bonds maturing in 2014 and 2015 were postponed to 2017 and 2018. Moreover, this country, which plans to complete its bail-out programme by the middle of this year, expects to secure around 7 billion euros in the debt markets in 2014 so that, with January's issuance, it will have already met almost half its target. Ireland, on the other hand, enjoys a relaxed cash position insofar as all its borrowing requirements for 2014 have been covered, although several issuances have been planned with the aim of anticipating the high rate of maturities it must meet as from 2015. Much more complex is the case of Greece, which needs to borrow approximately 30 billion euros, of which 6.8 million have not been met to date; i.e. they do not come under the current bail-out programme. The Greek government has two possible alternatives: appeal to the capital market to fill this gap or persuade the Troika to revise its terms. Certainly, neither the former nor the latter will be easy. Perhaps a harmonious combination of the two is the best way forward. 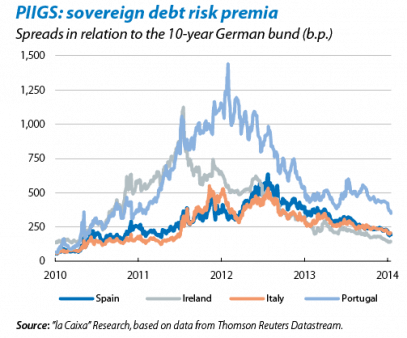 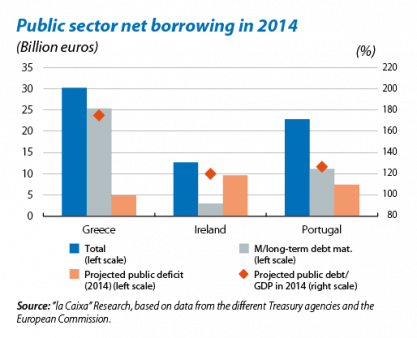