The present and future of financial integration in Europe

The European Central Bank (ECB) recently published its annual report on the degree of financial integration in the euro area and Europe as a whole.1 Its main conclusion is that, although the degree of integration has gradually recovered since the minimum levels reached in 2012, there is still a long way to go. Europe has relatively fragmented financial markets.

The financial integration indicators used by the ECB show a clear recovery since the OMT (outright monetary transactions) programme was introduced for public debt purchases (see the graph). These composite indicators are based on quantity (the volume of assets issued by another European country held by residents of a specific country) and price (the spread of prices in the bond, equity, interbank and credit markets between different European countries). The improvement observed over the last few years has been supported by the implementation of the banking union, as well as various expansionary monetary policies that have injected liquidity and have helped to improve investor confidence. In this respect, the reduction in macroeconomic imbalances in the periphery has also been significant. However, the recent episode of financial instability affecting global markets since mid-2015 has led to a certain hiatus, albeit probably temporary, in this improvement in the degree of integration.

Advances in the area of banking union and steps to create capital markets union, which the European authorities want to promote, should result in greater financial integration over the coming years. With regard to banking union (or banking integration), in its report the ECB stresses the need to harmonise the regulatory framework applicable in the different member states (in particular reducing to a minimum the so-called national discretions which had been established in European directives when the banking union had not yet been agreed) and also the importance of establishing, as soon as possible, a single deposit guarantee scheme at a European level with a public funding backstop such as the European Stability Mechanism (which would separate bank risk even more from sovereign risk). Both measures, as well as others, should boost the cross-border activity of European banks. In the area of capital markets union, the ECB notes the possibility of advancing quickly in some aspects such as promoting the asset-backed securities market (helping issuing banks to release capital) and laying the foundations for a single covered bond market.

In any case we must remember that it is not just the degree of financial integration that is important but also its quality. Integration will be more desirable the more robust it is and the more it can withstand shocks of a financial or economic nature, and provided it promotes efficient risk sharing among the residents of different countries. The most favourable type of integration is therefore based on flows of capital holdings and foreign direct investment, on the ownership of long-term rather than short-term debt and on retail bank loans rather than flows of interbank loans. Various studies have found that, in a country with a high degree of financial integration such as the US, the diversification of the investment portfolios held by residents of a state with assets from other states is a considerable help in reducing the correlation between the GDP of a state and the consumption of the residents in the same state. Undoubtedly a great deal needs to be done before we can reach the same situation in Europe, where 50% of company shares are in the hands of national investors. 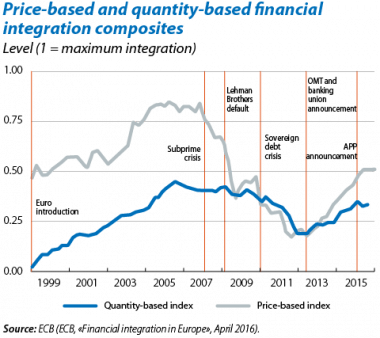