The Treasury's Funding Programme in 2014: a demanding agenda

2014 has begun well for the Spanish public debt market. The Treasury's auctions have been well-received and, in just over two weeks, they have managed to cover 16.6% of the medium and long-term issuances planned for the year as a whole. Moreover, their closing interest rate has reached all-time lows in some cases. Doubts regarding the sustainability of Spain's public debt seem to be diminishing, making it easier to bear the burden of a public debt which, in November 2013, had already reached 93% of GDP.

Given this situation, the Treasury has presented an ambitious financing strategy for 2014. There are two main goals: to continue reducing the average cost of debt at the same time as increasing its average maturity. To achieve both goals, it is vital to further diversify the investor base. This has shrunk considerably over the last few years: in December 2011, 50% of public debt was in the hands of non-residents, a figure that fell to 33% in August 2012. In the last few months, this trend has reversed to such an extent that, in December 2013, it was slightly above 40%. However, to continue encouraging this trend, the Treasury will carry out different issuances in addition to ordinary debt auctions. Particularly significant is the greater relative weight expected for syndicated debt. In January, for example, the Treasury issued syndicated debt totalling 10 billion euros, with demand reaching 40 billion.

Similarly, the Treasury also wants to boost issuances of securities in foreign currency or bonds index-linked to European inflation. In fact, there is already a liquid market for the latter as France, Italy and Germany have already used this kind of strategy, so the Treasury's issuances should have a natural benchmark.

After several years in which both the average length and cost of debt moved in the less desired direction, in 2013 this trend was finally reversed: the average maturity rose from 6.1 to 6.2 years while the cost fell by 38 bps. It will nevertheless be quite challenging to maintain this trend in 2014 as the volume of issuances planned is among
the largest of the last few years. Specifically, the Treasury predicts that, in order to cover its debt maturities and finance the expected public deficit, it will need to attract 242.4 billion euros. In this respect, the improvement occurring in financing terms over the last few months will be of great help. The cost of financing short-term debt is at an all-time low and there has been considerable improvement in long-term rates. Moreover, the latter is likely to be boosted by a falling risk premium as the Spanish economy's recovery increasingly consolidates.

In short, although gross borrowing by the Treasury is likely to be very high this year, it should not have any problems in securing such financing without damaging the average cost and length of its debt. However, it is important to remember that the current context of low interest rates is exceptional. Although the ECB has stated that it will keep the official interest rate at current levels for a prolonged period of time, this will rise again in the medium term so that it is of the utmost importance to manage debt properly over the coming years. 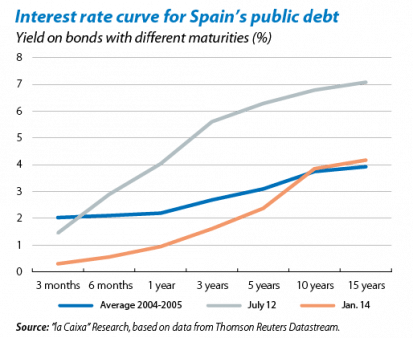 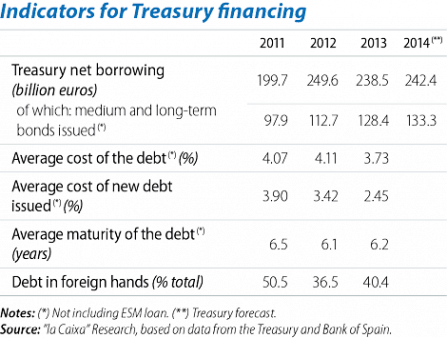