Inflation and its determinants: a measure of our ignorance

Four years after the start of the economic recovery, euro area inflation has yet to return to pre-crisis levels. While core inflation averaged1 1,8% between 2000-07, it has oscilated around 0,9% since 2014. This Focus examines the slowdown in inflation. While the reasons behind the slowdown remain, to some extent, elusive, we will see that three factors alone can go a long way explaining the observed trend: the rise in unemployment, higher underemployment and, perhaps surprisingly, the slowdown in productivity growth.

The unemployment rate has often been used as a measure to gauge price pressures. When this is higher, workers have less bargaining power to negotiate wage rises and there is less pressure on prices. Although unemployment has fallen since the start of the recovery, it is still higher than its pre-crisis average (see the first chart). Another variable, the underemployment rate or the proportion of employees who would like to work more hours, has risen sharply since the start of the crisis. A higher rate of underemployment should push down wages since such workers provide companies with more room to increase production capacity without having to take on more staff. Finally, another key factor is the slowdown in labour productivity growth2 since the start of the crisis (see the first chart), although in this case its impact on inflation is, in principle, ambiguous. On the one hand, the larger number of goods and services resulting from higher productivity should push down prices, given a certain rise in wages. But higher productivity growth could also result in larger wage demands by workers and this could also affect prices, especially if such demands are greater than what would be justified by the productivity gains.

The challenge lies in going beyond a qualitative assessment and quantitatively measuring each factor’s impact on inflation. One useful benchmark is the IMF wage growth analysis for all developed economies.3 A similar methodology is used in this article but focusing on inflation rather than wages and restricting our analysis to the main euro area economies (Germany, France, Italy, Spain and Portugal).4

The results show that, together, these three factors account for two thirds of the inflation dynamics between 2014 and 2016 (see the second chart). We find, somewhat surprisingly, that the unemployment rate has limited predictive capacity (accounting for just over 30% of the trend observed), an issue we will deal with in future articles. On the contrary, the remaining variables, are good predictors of the inflation trend, particularly the underemployment rate (23% of the trend observed). Perhaps the most interesting finding is that one third of the observed variation in inflation remains unexplained. This is the extent of our ignorance.

1. Core inflation is headline inflation minus oil and unprocessed commodities.

2. The ratio of GDP to total hours worked is used.

4. Following the IMF’s methodology, the following equation is estimated: \(\pi_{i,t}=\alpha+\rho\pi_{i,t-1}+\beta u_{i,t}+\gamma prod_{i,t}+\delta sube_{i,t}+\varphi_id_i+\varepsilon_t,\) in which \(π\) denotes core inflation, u the unemployment rate, prod the three-year moving average of labour productivity growth, sube the underemployment rate, d a country indicator and \(\\\varepsilon\) the residual of the regression. i denotes the country and t the period of time. The sample consists of annual data between 2000 and 2016. 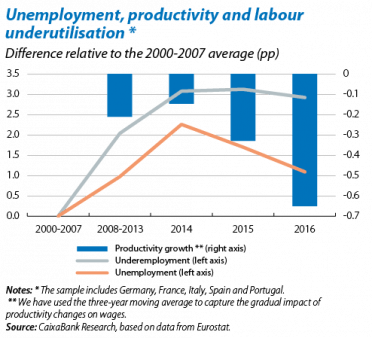 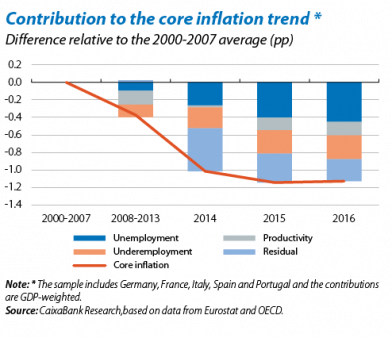 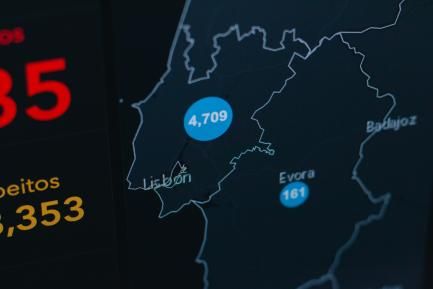