• Recently, Portugal’s inflation has registered negative figures for the first time since 2015.

• One of the reasons behind this trend is the sudden drop in energy prices, a phenomenon mainly driven by external factors.

• The slowdown in prices since the end of 2018 also coincides with the adoption of government measures aimed at reducing prices of some consumer products.

In recent months, prices in Portugal have surprised the market as inflation has dropped to negative values (for the first time since 2015). In July and August, prices fell by 0.3% and 0.1% year-on-year, respectively, while core inflation was also negative in July (–0.1%) and very low in August (0.2%). This trend is particularly striking if we draw a comparison with the rest of Europe. The year-on-year change in Portugal’s Harmonised Index of Consumer Prices (HICP), which is comparable with price changes in the various countries of the euro area, was also negative in both July (–0.7%) and August (–0.1%), while prices rose by 1.0% in both months in the euro area as a whole. What lies behind this trend in Portugal’s inflation?

Portugal’s inflation has fallen from an annual average of 1.0% in 2018 to 0.6% in August (average figure for the past 12 months). The sudden reduction in the prices of energy goods has been a key external factor behind this trend: between December 2018 and August 2019, the average rate of change in the prices of energy goods over the past 12 months fell from 4.7% to 0.9%, which explains –0.3 pps of the decline in the overall average inflation.

The slowdown in prices since the beginning of the year also coincides with the adoption of government measures that have reduced the prices of some consumer products included in the index. In January, the Energy Sector Regulatory Body decided to lower electricity prices by 3.5%.1 In addition, in April the government lowered the price of public transport tickets by 23% relative to the prior year, and in May the new Europe-wide telecommunications rates came into force resulting in a deceleration of prices in this field from 0.4% in December 2018 to –1.2% in August. In addition to these administrative measures, a series of promotions in the tourism sector also contributed to the fall in inflation: growth in restaurant and hotel prices fell from 2.1% down to 1.1% in August.

Over the coming quarters, inflation can be expected to embark on a gradual recovery towards the European average, supported by the low unemployment rate, greater buoyancy in wages and the accommodative monetary policy of the ECB.

1. This figure also reflects the impact of energy prices mentioned in the previous paragraph. 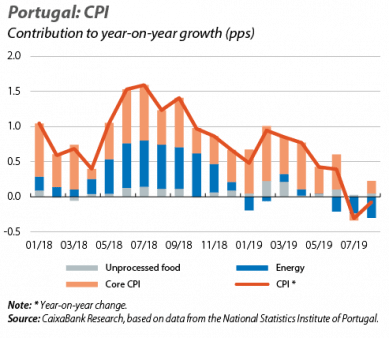 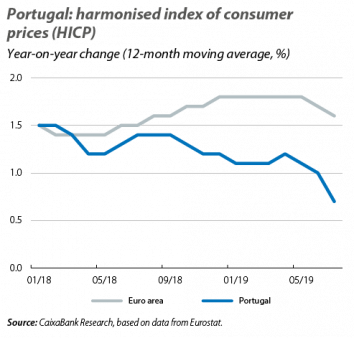 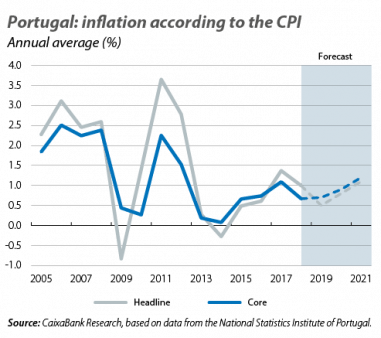 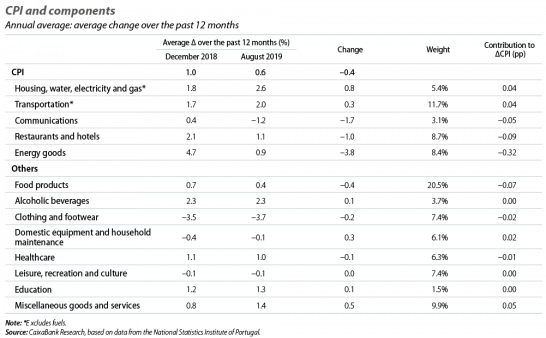